Trump Sure Pulling Out Will Work This Time. Wonkagenda For Thurs., April 5, 2018 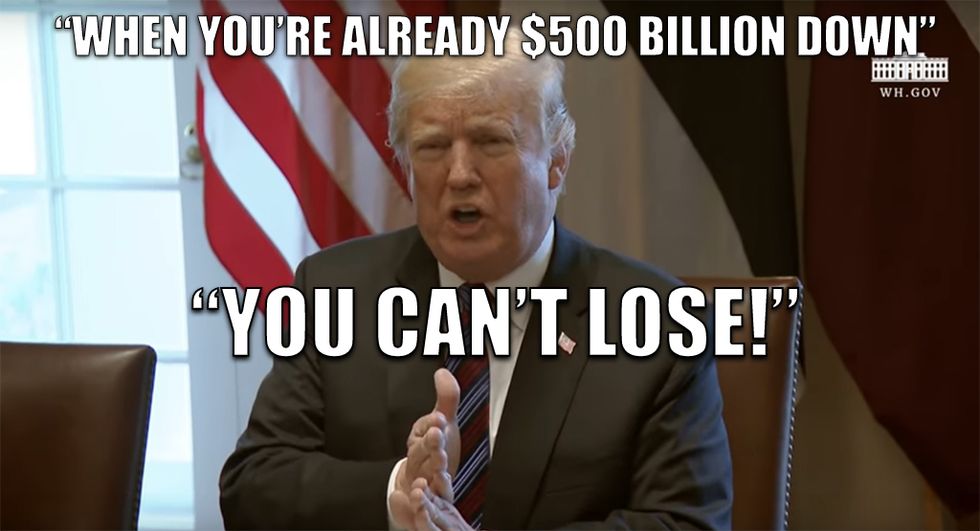 Robert Mueller is following the rubles, questioning Russian oligarchs, requesting documents, and even searching a private plane after it landed in New York.

The US is expected to impose additional sanctions on Russia by Friday. Beyond targeting Putin-connected oligarchs, details remain fluid. Last week, Trump's White House denied Ambassador to Russia John Huntsman's request to publicly address the expulsion of US diplomats, but Huntsman did make a Youtube video.

A judge appeared skeptical that Paul Manafort's legal challenge to Robert Mueller will be successful after noting Manafort's lawyers appear to be saying nothing happened, before anyone knows what's actually happening. Manafort is arguing that Mueller's case is flawed because lobbying for foreign governments isn't illegal.

Incensed that he can't just impose his will on the federal government, Trump wants to issue a series of executive orders over the next few weeks in order to appease his base of talking heads and blowhards on Fox News.

As Trump complains about pulling out of Syria, military officials were almost unanimous in telling Trump he can't just pull out of Syria, noting several failures from previous attempts to pull out.

The EPA's top ethics official says he was missing some information about Scott Pruitt's shady condo, noting that he only saw the lease, not what Pruitt was actually doing.

Pruitt has been on a conservative media blitz in a desperate attempt to save his job, but he kind of shit the bed last night during an interview on Fox.

REXXON may be gone, but he left a $12 million bill for all the consultants he hired to hollow out the State Department.

The CEO of Oracle was invited to a private dinner with Trump by Peter Thiel, where they bitched and moaned about Amazon aiming for Pentagon contracts. Shady dinners have been a staple of the Trump presidency, allowing him to shovel burnt ketchup steaks in his maw while people feed him praise and misinformation.

A federal judge has bitch-slapped Bill O'Reilly's attempt to keep sexual harassment settlements secret, potentially opening the floodgates for women to disclose how they were spied on, or asked to lie under oath.

Stormy Daniels and her lawyer may have faded from the headlines this week, but they're still around, trying to talk about Trump's junk. Eww...

The wife of Rudy Giuliani has filed for a contested divorce and we can't really blame her. He's an obnoxious asshole. Get that money.

As November looms closer, some red state Democrats may benefit from Trump's trade war due to their rather populist approach to blue collar jobs and trade.

Russia is trying to discredit the investigation into the death of a former spy after UK Foreign Secretary Boris Johnson started running his mouth again. Despite being a bombastic idiot, Johnson is still more credible than Donald Trump.

A federal judge has ruled that the government can't use a paywall to hide data from FOIA requests. The case involves a journalist seeking information from US officials who, according to his claim, were attempting to hide immigration data by charging a fee much higher than normal FOIA requests. WIN!

A Massachusetts judge has cleared the path for the state Attorney General to sue Equifax for violating data security regulations after it tried to hide a massive security breach that affected 140 million people (AKA: half the population of the United States).

Several days ago the city of Atlanta suffered a devastating cyberattack that forced many communication and city services offline. Rather than sit and stew, some record keeping systems simply reverted to old-school pen and paper.