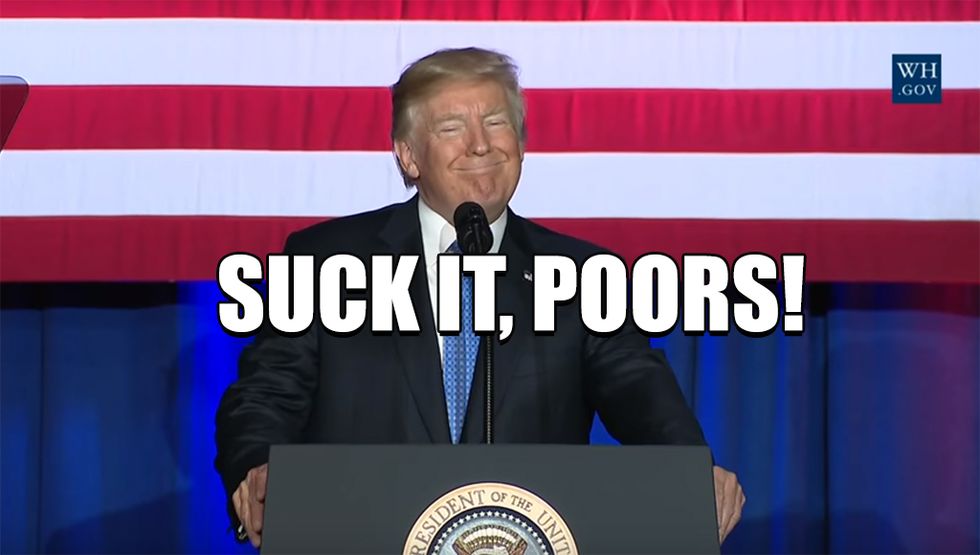 After Paul Manafort failed to come correct on his his Russian blood money, he made his pissed off Russian partners an offer they couldn't refuse.

The Trump Taxes are here, and the loudest assholes in the room are the press who keep asking why are all these super rich people getting a fucking tax cut?

Sen. Lisa Murkowski is taking headshots at zombie TrumpCare, telling her colleagues that any health care law needs to be bipartisan.

Democrats are playing a dangerous game and daring Republicans to keep trying to strip healthcare from all the poors.

Because he's not happy picking fights with just one or two countries in Not America, Trump is now starting a trade war with Canada.

Now that Puerto Rico is a No Man's Land, Florida Democrats are opening their arms to welcome all the potential new voters who could tip the scales in future elections.

Trump is apparently pissed at Tom Price for skipping around fly-over country on fancy planes. Maybe he should have used Trump Air?

It's not just Tom Price who refuses to fly in steerage, Scott Pruitt has been using chartered military flights to avoid rubbing elbows with the rest of us regular folk.

Good news, heathens! A US District Judge has struck down a Kentucky anti-abortion law that required ultrasounds before abortions.

People in Baltimore's "Kushnerville" want to drag Prince Kushner into court and sue his smarmy ass for ruining their lives with with nickel and dime fees.

Some brain cases at one of those fancy schools crunched some numbers and found that Russian social media bullshit brainwashed racist uncles in swing states like Pennsyltucky, Florida and Michigan to push Trump over the edge.

In a desperate attempt to fall off the same cliff as the Trump Train, Paul Ryan was kicking Mitch McConnell on Hannity last night. He had charts, and graphs, just like Ross Perot!

Don't you dare tell Tucker Carlson he's a racist, or a white nationalist, or an ignorant fuck stick in a suit who doesn't know the first thing about struggling to survive on less than minimum wage like a common poor! Why, he just might make snippy comments on his teevee show about you!

Two weeks ago, when Little Donnie dumped his Secret Service chaperones and people started freaking out, he had actually decided to go moose hunting in Canada -- and he would have gotten away with it too, except he's A Idiot.

How bad is it to be broke AND black in America? Hint: It's really bad. And may Crom help you if you need to file for bankruptcy.

We need you to give us money! Seriously, we're powering our computers on bicycles over here!