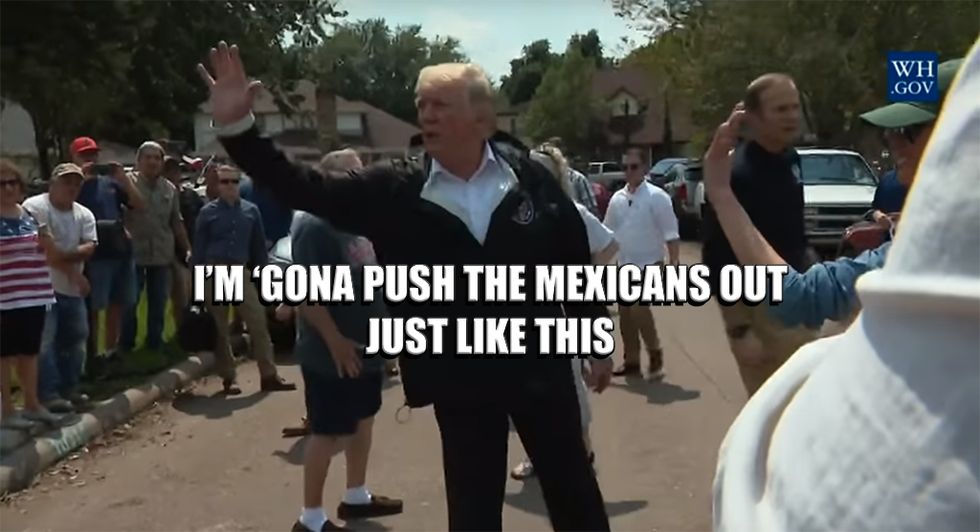 Oh, hey there, Wonketariat! We're already churning out newses, and here's some of the things we may be talking about today

Trump has to decide if he'll kill the dreams of Not American kids and overturn DACA, or tweet Texans into a YUGE lawsuit.

Congressional committees are trying to snipe each other on their respective Trump-Russia investigations, and they're cranking things up to 11 this fall.

Congressional Republicans are worried about a debt showdown (again) as some Trump officials try to tie Harvey aid and the Tortilla Curtain to the federal budget.

Hypocritical Texas Republicans are sheepishly walking to Capitol Hill with their hats out begging for spare change like a regular Democrat with the hope that they'll receive federal aid to rebuild Houston. Maybe they'll learn a lesson in humility and civics? Just kidding.

OF COURSE Trump installed a campaign lackey in the EPA to dole out grants. How else are we supposed to explain all those karma-induced, Jesus-driven hurricanes? Climate change?

Congressional wingnuts want Trump to rescind his endorsement of Sen. Luther Strange so that the Breitbart crazies can go balls deep into Roy Moore.

A new study is warning Democrats to stop caring about the poors and back away from the Berners after finding that "handouts" like "free college or universal basic income just exacerbate [middle class] resentment" of Democrats. BRB, gotta go get ready for my third job, it pays off my student loans.

After ICE arrested a US citizen, he spent over 1,200 days in jail waiting for US officials to realize their fuck up only for an appellate court judge to dismiss the case without damages.

St. Louis is bracing for violent protests as the city waits for a verdict in the case of a cop who shot a man point-blank and ALLEGEDLY planted a gun. Don't worry though, cops kill people in St. Louis all the time.

Germany has gone to war on Russian propaganda campaigns, beefing up fact-checks in newspapers, and educating the average blue-collar Otto Normalverbraucher on basic cyber security.

Melting Arctic ice has created a new oil rush between the US, Russia and China, and the US is losing like a bunch of losers since B. Barry Bamz tried to wean us off fossil fuels.

Canada's been smuggling in gay Chechens through a super secret underground GAY railroad, and brainwashing them with poutine, free health care, and Tim Horton's.

ICYMI: Computer nerds were warning federal and state officials about Russian hacking long before anyone caught on, but everyone ignored them because nerds are gross.

Hillary Clinton is throwing some shade at Bernie Sanders for spending the 2016 campaign acting like kind of a dick, and bitching about revolutions.

Spicey landed a new gig where he'll lie to super rich people about how to be a successful liar in Washington. He apparently has "extensive experience."

Obama TRIED to give Trump some advice but Trump probably misinterpreted the part about preserving "democratic institutions and traditions" as a hippy liberal "big-D" Democrat thing.

We're 100% supported by very sweet and generous readers like you, that's why we don't bombard you with penis-envy ads.