Trump Tied To Creepy Crimers In Whole New Country, And It Is Azerbaijan! 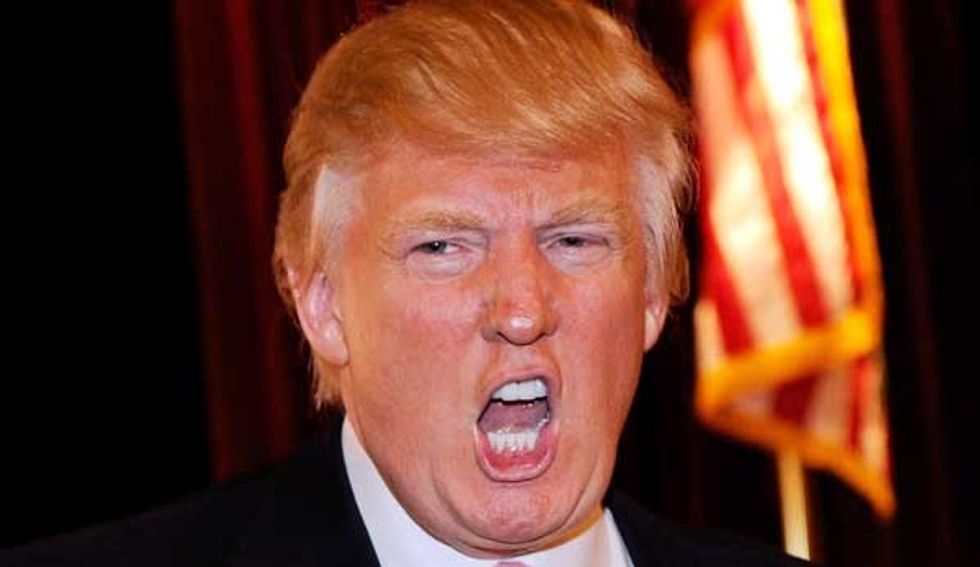 He'll give that damn rose to anybody, we guess.

Hello, patriotic Americans, have we all gotten over how President Dumbass made up a lie about Obama doing a "wire tapp" to him, in hopes that will distract everybody from investigating his shady, possibly criminal ties with Russia and other places also too? Good, glad we are over that. Because there's a NEW story out, about a NEW country where Donald Trump might maybe have his mini-paws dirty in some bad, law-breaking money, and it is Azerbaijan! (Don't worry, Azerbaijan and Russia touch each other, so we're not going far from Trump's real dad Vladimir Putin.) We alluded to this story Monday in our post yelling at creep ass Utah Rep. Jason Chaffetz, as a suggestion for a thing he should investigate, instead of Trump's stupid "wire tapp" lie.

Investigative reporter Adam Davidson published an incredible piece in The New Yorker called "Donald Trump's Worst Deal," and we will try to summarize it briefly, then tell you to go read your damn self. (Also, if you don't like #Reading, scroll to the bottom of this post, because Rachel Maddow did a lovely segment on her TV program Monday night about it. She even makes a vagina joke!)

The Trump Organization did a project, with Ivanka at the helm, in Baku, Azerbaijan, which is a foreign place between Russia and Iran. It is a very corrupt place, Azerbaijan! But what started out as a licensing deal for a big weird vagina-shaped luxury hotel tower in Baku turned into something more. According to Davidson, the Trump Organization was very hands-on, dictating design elements, and visiting all the time.

Davidson explains that, on paper, everything about the project looked weird. It was in a screwy neighborhood for a luxury hotel, nowhere near the other fancy schmancy hotels on the Caspian Sea. It was way more expensive than it should have been. And considering the state of things in Azerbaijan, it didn't even seem like there would be much of a clientele for the hotel. Doy doy doy! Makes no sense, unless, as Rachel Maddow notes below, the point wasn't actually do do a GOOD DEAL, but just to launder money into some sketchy fat cats' pockets, some of whom might be RADICAL 'SLAMIC TERRORISTS. Did we mention Azerbaijan is corrupt?

The Trumps partnered with relatives of a guy named Ziya Mammadov, the Azerbaijani transportation minister who makes $12 grand a year, and is also a billionaire. Totally normal Suze Orman story! As Davidson reports, WikiLeaks has released cables from a U.S. diplomat who called Mammadov “notoriously corrupt even for Azerbaijan," and Foreign Policy has previously nicknamed the family the "Corleones of the Caspian." They seem nice! Anyway, the company the Trump Organization contracted with is led by Mammadov's son, Anar, and Elton Mammadov, Ziya's brother and a member of parliament, was the one who signed all the documents for the Trump deal. Also too, Davidson reports that pretty much everybody in Azerbaijan knows that Ziya Mammadov is the one who really runs the company.

Now, if these people are "notoriously corrupt" and full of extremely shady money, what does that matter for the Trump Organization? Well!

The sustained back-and-forth between the Trump Organization and the Mammadovs has legal significance. If parties involved in the Trump Tower Baku project participated in any illegal financial conduct, and if the Trump Organization exerted a degree of control over the project, the company could be vulnerable to criminal prosecution. Tom Fox, a Houston lawyer who specializes in anti-corruption compliance, said, “It’s a problem if you’re making a profit off of someone else’s corrupt conduct.”

So, as Davidson explains, companies do risk assessments, in an effort to keep their noses clean, because they very MUCH can be prosecuted if they profit off other people's bribe-y, laundered money. Alan Garten, chief legal officer for the Trump Organization, told Davidson they did that risk assessment, but wouldn't give him any other information. But it was all fine, we bet! Davidson wonders, though, whether they REALLY did their due diligence, since the Mammadovs have VERY WEIRD FINANCIAL TIES to the Iranian Revolutionary Guard. Yes, the same Iranian Revolutionary Guard that's one of the world's biggest state sponsors of RADICAL 'SLAMIC TERRORISM! Remember how Azerbaijan touches two countries, and one of them is Iran?

Anyway, as Maddow explains below, the Iranian Revolutionary Guard is heavily sanctioned by the U.S. government, so if the Trumps profited off, in a roundabout way, doing business with them, they could end up in deep shit.

Also too, remember how Elton and Ziya Mammadov are part of the Azerbaijani government?

The Foreign Corrupt Practices Act, passed in 1977, forbade American companies from participating in a scheme to reward a foreign government official in exchange for material benefit or preferential treatment. The law even made it a crime for an American company to unknowingly benefit from a partner’s corruption if it could have discovered illicit activity but avoided doing so. This closed what was known as the “head in the sand” loophole.

Huh, the plot thickens! Will this make the whole Trump family GO TO JAIL?

Anyway, the building sits empty now. As Davidson explains, a month after Trump was elected, the Trump Organization pulled out of the deal, for reasons we can only wildly speculate at. Maybe the Trumps didn't want journalists to come knockin' at this story, especially since "President" Trump decided to keep all his sexxxy assets for himself instead of transferring them to a truly blind trust or divesting.

Anyway, there is much more in Davidson's story, but that should give you enough info to make you want to watch the Maddow video and read the whole big article (it is very good!), and if it doesn't, you are FAKE NEWS, goodbye.

Wonkette, which is not FAKE NEWS, is completely reader-supported, so help us out with a few bucks!