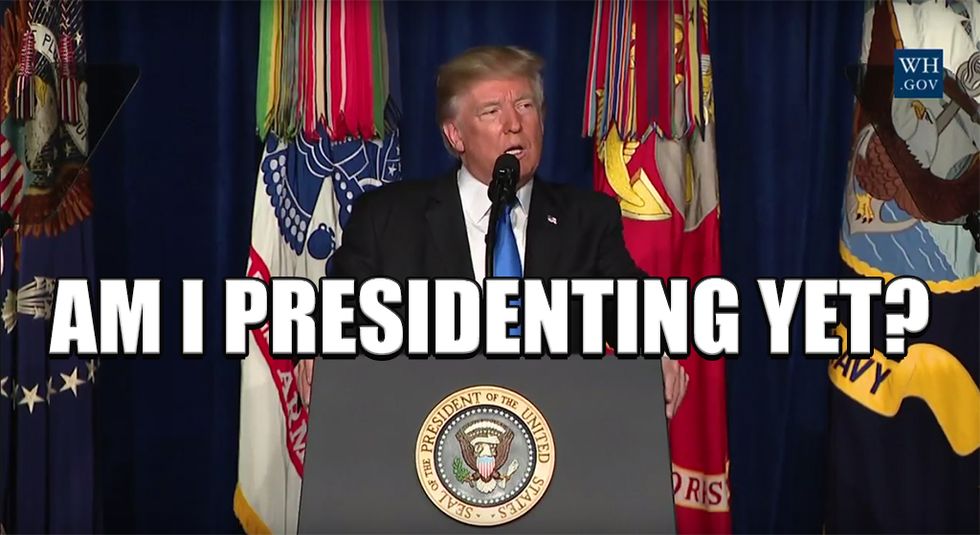 We survived the sunpocalypse, Wonketariat! Have some special doggo nice times and then take a look at some of the things we may be talking about today.

Trump says he wanted to "follow his instinct" and pull out of Afghanistan, but instead he'sincreasing US forces and bitching at Not American countries throughout the region. Historically speaking, Trump never had much experience pulling out.

Since his return to Breitbart, Steve Bannon is already driving Trump's base far from Fox & Friends, and last night he mashed the gas pedal, effectively throwing Trump under the bus.

Warhawks are elated about the prospect of Trump making boom booms in Afghanistan, but there's caution on many sides after Trump refused to give any specifics.

Trump's Interior Department doesn't want to hear about mountaintop removal in Appalachia, so it's stopped a review of the health risks related to coal mining. Good thing coal miners and communities near mines have never faced unique and deadly diseases!

Potential visa lottery winners may be screwed now that the State Department is intent on following Trump's travel ban.

Paul Ryan is full of sadz about Trump's comments on Charlottesville, and that's all he's got to say about that.

New Jersey's Democratic Sen. Bob Menendez has hired a lawyer who specializes in crooked politicians in an effort to cast doubt on an ALLEGED quid pro quo scheme. His lawyer's current and past clients include Jared Kushner, Trump's kids, Jack Abramoff, and John Edwards. Draw your own assumptions.

Aaron Davis, a Minneapolis lawyer, has been "You're Fired" after a local paper ran a cover story about his side gig running a neo-Nazi record label. [h/t Raw Story]

The dad of the Steubenville, Ohio, rapist tried to kill Judge Joseph Bruzzese in what is believe to be retaliation for his kid being convicted of raping a 16-year-old girl in 2013. The father was shot and killed, and we're not going to bother naming him.

Arizona Republican Gov. Doug Ducey is bailing on Trump's rally tonight in Phoenix to oversee the handling of thousands of expected protesters and avoid being seen anywhere near Trump.

An outbreak of measles in Minnesota has brought out all the loons, but anti-vaxxers are determined to be the craziest Morans of all.

The Charolottesville City Council unanimously voted to begin the process necessary to remove Confederate statues, but not before a chaotic protest broke out and residents spent four hours criticizing city officials, who bailed out (save one, Vice Mayor Wes Bellamy) rather than face residents.

Vladimir Putin has appointed Anatoly Antonov as the new Russian ambassador to the US, and he's such a loyal lapdog that one official once joked that he's "more Catholic than the Pope.

Russian state propaganda news media is pissed about a story that details what it's like to work in a Russian fake news farm.

Obama still beats Trump in the TV ratings game, which is really the only true metric of presidential success.

According to Univision, a lawsuit over an old Gawker-era Deadspin story profiling a grifty Vegas bookie is intended to scare journalists into bankruptcy. Good thing the plaintiff got Hulk Hogan's attorney. [Archive]

A pro-Trump troll reappeared on Twitter yesterday, desperately hoping to get Trump's attention so he can feel validated shitposting. Sad.

Breitbart is hemorrhaging advertisers while it continues to try and distance itself from yucky labels, like "alt-right" and "Nazis."

Former CNN panelist Jeffrey Lord may get a job with Breitbart now that he's too fuggo for even Fox News to put on TV.

The yuppie douchenozzles over at the Daily Caller think Barron Trump dresses too informally for a presidential kid, based on yesterday's eclipse photos. Considering he's 11 and has spent most of his life locked in a tower, and that his fast-food-stuffed father wears sloppy suits with tape on his absurdly long Not American ties, they may want to stick to fantasizing about Tucker Carlson in a puffy shirt.

Steve Mnuchin's wife is bragging on social media about her extravagant lifestyle, but the two swear they're not stealing money from taxpayers because they're already fabulously wealthy. Bourgeois Barbie has since privatized her social media account.

Here's your late night wrap-up! Conan O'Brien and Andy Richter took a look at the sun; The Daily Show and Roy Wood Jr. had some advice for millennial neo-Nazis.

And here's your morning Nice Time! Dusky pademelons! They're adorable wallabies from a remote region of Not America!

We get up early and stay up late for readers like you, so GIVE US YOUR MONEY! Please, k, thx bye!