Trump To National Monuments: You're Fired! 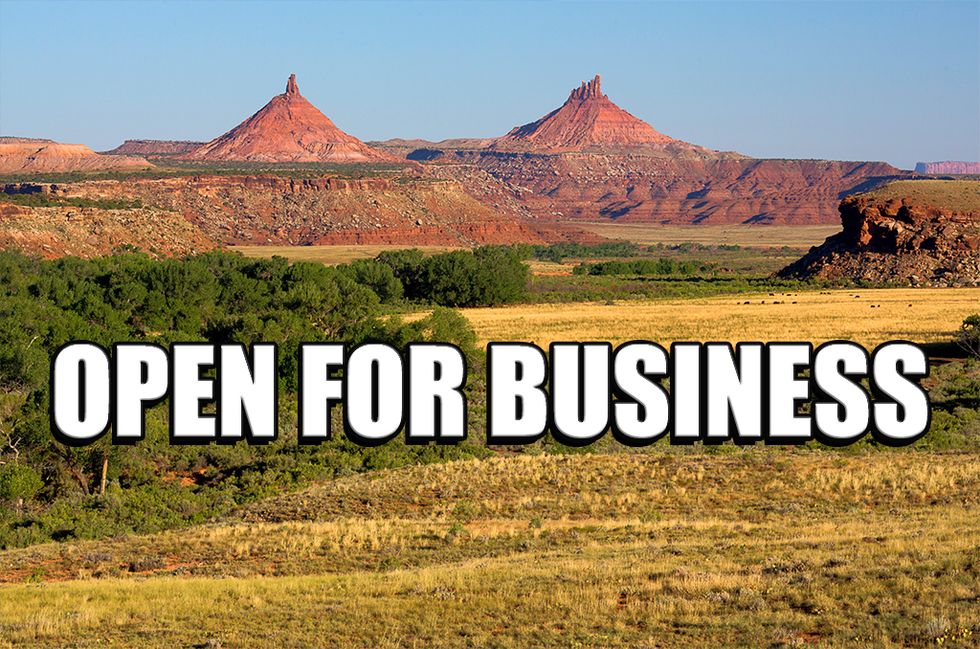 Donald Trump had his McDonalds-stuffed ass hauled out on Air Force One to Utah Monday so he could personally shit all over the new Bears Ears National Monument and announce he intends to reduce its size by as much as 90 percent -- marking the first time ever that a president has actually removed protected status from a national monument. It is unclear at press time whether Air Force One was equipped with nozzles to spray chemical defoliants over the land prior to its being opened up again to commercial exploitation.

According to Utah Senator Orrin Hatch, Trump plans to announce a reduction in the size of the monument by between 77 and 93 percent. Bears Ears had been designated a national monument by Barack Obama near the end of last year, to the applause of nature-likers, a coalition of Native American tribes and conservationists. So obviously, it has to be whittled away to nothing if at all possible. Extraction industry lobbyists and Bundy-aligned Fuck The West groups objected, because what good is public land if you aren't hauling resources out of it, or hauling ass in an ATV across it? Public land is downright un-American.

Trump's declaration today notwithstanding, it could be years before the land is completely fucked over by mining, drilling, and logging interests, because while the Antiquities Act grants the president the power to designate national monuments for the protection of lands, the act has never been used by a president to withdraw such protections. There will be lawsuits, and, oh shit, just look at what's been done to the Supreme Court.

Former Interior Secretary Sally Jewell wrote in an op-ed for the Guardian that Obama's declaration hadn't just been a whim of a president who hates coal mines, noting that the earliest proposals to protect Bears Ears went back 75 years, that efforts to protect Bears Ears had originated in Congress, and that the monument had been supported by five tribes in the area, the Hopi, Zuni, Navajo, Ute, and Ute Mountain Ute, who often disagree on other matters, but were united in wanting tribal land protected:

In the past century, tribal leaders have witnessed looting of grave sites, irreparable harm to petroglyphs by vandalism, sacred places torn up by indiscriminate off-road-vehicle use, and damage to a unique, intact landscape. I have seen these impacts myself – and as an American, I am ashamed we have let this happen. As secretary of the interior, I understood that my job was about listening. That's why Bears Ears national monument is the first monument ever created through tribal advocacy, and the first monument that directly engaged tribes with management.

In response, we suppose Donald Trump will tell the tribal leaders that he likes to call Elizabeth Warren "Pocahontas." GET IT???

There's more at stake here than just one national monument. Trump is expected to announce rollbacks of other protected areas in Maine, New Mexico, Oregon, Nevada, and even an underwater preserve off the New England coast. Democrats designated them, so they are obviously bad. Beyond the obsessive desire to undo everything Barack Obama ever did, this sets a dangerous precedent, says Jewell:

[Trump's action] will ignore the 2.8 million Americans who have spoken out in defense of these public lands, and will undercut the jobs and revenues they bring to local economies from outdoor recreation and tourism. More fundamentally, it will break the promise to these tribes – and to the American people – that, once established, national monuments are protected in perpetuity.

But what the hell -- Native peoples learned long ago that when the US government said its promises were as good as long as the rivers run, they really meant until minerals were found, so maybe it's time the white folks with tents and Roger Tory Peterson bird guides learn that hard lesson, too. There's millions of acres to be exploited, and Real Americans were born to fuck shit up.

The White House did not announce whether Trump's limo would be modified to belch thick black smoke on its way to today's announcement. The president is expected to end the trip by by ceremonially throwing a bag full of garbage onto the ground at the feet of an Anglo actor wearing a historically inaccurate Plains Indian outfit, then shout "LOSER!" in his face as a single tear runs down the actor's cheek.

You can't hide your Iron Eyes

Yr Wonkette is supported by reader donations. Please send us money, because it's not like the world is gonna be here forever.