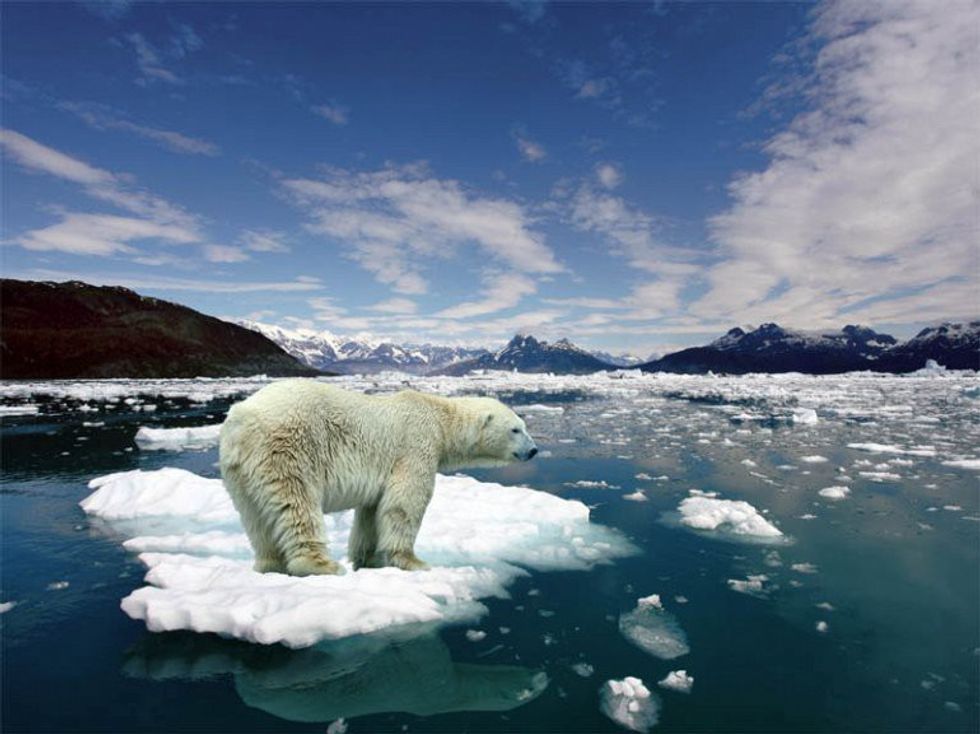 Donald Trump proudly announced Thursday afternoon that the United States will take the lead in making the planet uninhabitable by large mammals such as himself. He's really fucking proud of all the money we'll make by pulling out of the Paris Climate Accord. We'd say something about how Trump's 11-year-old son is doomed to grow up on a planet whose environmental balance is now more likely to tip into ecological disaster, thanks to his father's short-sightedness, but we are given to understand that would be considered an attack on the president's innocent child. So instead, we'll just hope the process of disengagement from Paris can be slowed down in time to get a president who understands science. Oh, for that matter, anything.

Since the only thing Trump can talk about is dollars, former congressman John Dingell decided the smartest move was simply to turn off the TV:

Here's a glimmer of hope, since you no doubt really need some about now, noted by the New York Times:

[Trump] will stick to the withdrawal process laid out in the Paris agreement, which President Barack Obama joined and most of the world has already ratified. That could take nearly four years to complete, meaning a final decision would be up to the American voters in the next presidential election.

Trump largely framed the decision to avoid taking action to prevent the warming of the planet in terms of money and politics, because in his heart, he still believes climate change is a hoax created by the Chinese. He spoke of how many millions of jobs would be lost, based of course on the U.S. Chamber of Commerce's debunked estimates that exaggerated the likely costs, ignored the economic benefits of green energy expansion, and -- our favorite part -- assumes that U.S. industry would be forced to undertake immediate, harsh actions to meet the U.S. commitment to greenhouse gas reductions. In reality, the same study the Chamber of Commerce cherry-picked its worst-case scenario from actually presented several scenarios in which the goals could be met with robust economic growth. The president also falsely claimed the Paris agreement forces the U.S. to cut emissions while allowing every other country to increase theirs -- again, not so.

It was simply so much bullshit. In one of the most ugly distortions in the speech, Trump claimed that when negotiators from 195 countries voted to approve the final text of the Paris accord, the applause that broke out was a celebration of the U.S. being put at a permanent economic disadvantage compared to the rest of the world. Silly us, we thought it was because they thought they'd built a framework for turning back a threat to the planet.

But Trump was stoked about how rich we'll all be while we shit all over our only home, insisting the USA will be the "cleanest and most environmentally friendly country" in the world, because all he has to do is declare toxic sludge good for us.

Most sane people were aghast. Cheers to weather.com, which temporarily redesigned its front page Thursday to frame -- quite literally -- Trump's announcement with a raft of information rebutting it:

The planet itself provided one significant counterpoint today to Trump's announcement: A huge chunk of the Antarctic ice shelf is about to break off; when it does, it will result in one of the largest icebergs in history, with roughly the same square mileage as Delaware:

As for what's sure to be one of the most notorious lines from the speech, "I was elected by the voters of Pittsburgh, not Paris" (Fuck those snooty French! Hope they're all killed by terrorists!), Trump got this rebuttal from Pittsburgh Mayor Bill Peduto:

Elon Musk, head of Tesla, SpaceX, and the leader of the effort to make big, long-lasting batteries for storing electricity generated by home wind and solar, followed through on a promise to resign from several presidential advisory councils he belongs to.

Trump lied all the way through the speech, and as our coverage continues, we'll pick apart those lies further. For starters, every country sets its own greenhouse gas reduction goals -- nobody in Paris is imposing anything on them. We're not losing our sovereignty.

For now, here's a thought: The USA is now one of three countries that is not part of the Paris accord. One is Syria, which is kind of busy with a civil war. The other is Nicaragua, which elected not to sign up because it felt the Paris framework needed to address carbon reduction more aggressively.

Four years to leave the Paris agreement. We have time to stop that.

And now it's your Open Thread.

Yr Wonkette is supported by reader donations. Please click the "Donate" link below so we can keep yelling about the planet, which will be fine -- it's just the living things on it that may be fucked.