Trump Tried To Pay Karen McDougal For Sex, Because She's Almost As Hot As Ivanka! (ALLEGEDLY) 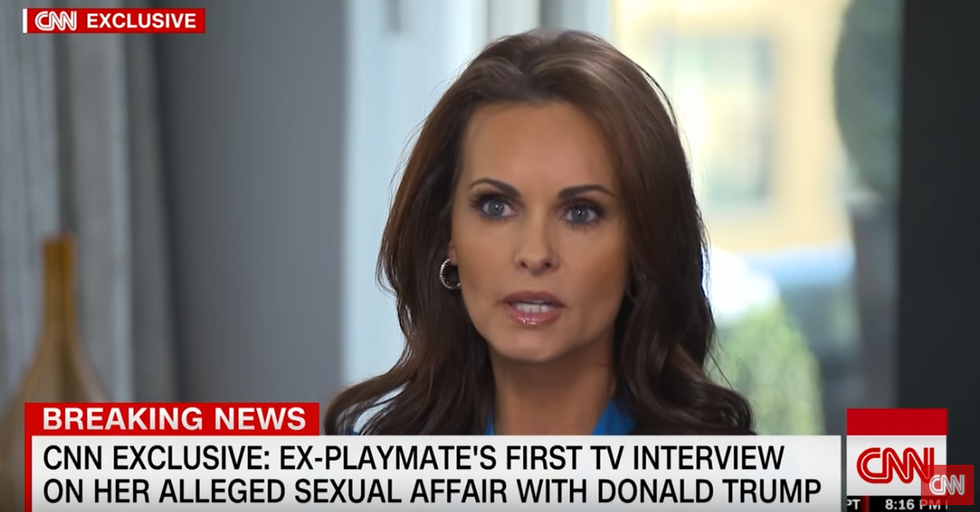 Karen McDougal is one of the 697,425 women suing Donald Trump to tell the story of that time they had an affair while Melania Trump was at home raising baby Barron. A former Playboy model, her case is interesting, because she was the one whose story got the old "catch and kill" treatment from the National Enquirer, which is run by a Trump BFF, before the election, and she alleges that her original lawyer was actually working in cahoots with Trump's dipshit lawyer Michael Cohen, and against his own client. That is not how these things are supposed to work!

McDougal sat for an interview with Anderson Cooper on Thursday night, and oh boy, did she have some juicy things to say! For instance, Trump tried to pay her after the first time they had sex, we guess because he thought she was a prostitute. (This is the first time we've ever heard of Donald Trump willingly trying to pay somebody for their services! LOL, that's just a little joke for the benefit of every lawyer who's ever represented him and every contractor who's ever worked for him, HI YOU GUYS!) McDougal also says Trump compared her to Ivanka, because Trump is hot for ladies who remind him of Ivanka, his daughter, isn't that sweet?

Shall we watch the interview together, and Wonkette will liveblog it and tell you the funny/gross parts? WE SHALL:

6:00: McDougal says one of Trump's good qualities is his "posture." Then tells the story of Trump trying to give her money after the first time they had sex, and she was horrified. Then Donald Trump told her she is "special," awwwwwwwww. Then Keith Schiller took her home. Donald Trump is gross.

8:00: In McDougal's telling, Trump was actually always really nice and loving toward her, while he was ignoring his wife and baby at home. And apparently it wasn't some big secret that they were dating, at least among her friends and family. It only became some big secret when he decided to steal the presidency.

11:00: Guess how often Trump talked about his new bouncing baby boy at home to Karen McDougal? NEVER HARDLY EVER. This is because Donald Trump is a shitty father and a shitty human being.

12:55: Wow, she really loved Donald Trump. Now she is telling the story of all the places they went together, and says whenever she flew to see him, or if they stayed in a hotel together, she would always book the arrangements and he would reimburse her, because that's how you have an affair on your wife who just had a new baby without leaving a paper trail. Donald Trump is a really shithole human being. Did we say that already in this post? He really is.

15:00: Of course, while Trump was having an affair with Karen McDougal, he was having other affairs at the same time. You know, because he just can't stop himself, he pops a white Tic Tac and starts kissing them, grabs 'em by the pussy.

15:30: Ooh, juicy. McDougal says Trump told her he was going to give her a New York apartment, but she couldn't see it because he was having it remodeled. And she never got to see it, because she ended the relationship. Oh well.

16:30: Ooh, and Trump even took McDougal to his apartment in Trump Tower one time (DIVORCE HIM, MELANIA). Anderson Cooper asked what the apartment was like, and she replied, "It's very gold." Then she said the Trumps have "great taste," which is not correct, ma'am.

This. Is. The. President. Of. The. United. States.

18:30: McDougal tells the story of the time she met Melania, at a party at the Playboy mansion. She said you can tell from the picture that she kind of tried to keep her distance. This interview is actually kind of heartbreaking.

Have we mentioned Donald Trump is a shithole human being? We should point that out.

20:00: And now McDougal is talking about how Trump compared her to Ivanka, because she said the didn't find it that weird, because Ivanka is pretty great and she understands why Trump would always brag about her. (Know who Trump doesn't brag about? Don Jr.)

23:30: Did McDougal think maybe their relationship would lead to marriage? "Maybe." And what about other women? Well, she thought she was the only one, but notes now, "If he's doing it behind his wife's back, why wouldn't he do it behind my back?"

26:30: Karen McDougal does not know how many times she had sex with Trump, because people in relationships don't keep a running tally of all the times they have sex, Anderson Cooper, you WEIRDO.

30:00: We at Wonkette believe women anyway, but I can't imagine anyone watching this interview and not believing every single word Karen McDougal says. The White House's denials at this point are just fucking dumb.

32:30: Karen McDougal is a "diehard Republican"! And she voted for Donald Trump!

Editrix here! Evan's transformer blew and he is relocating to a coffee shop, so this liveblog is either PAUSED or OVER! So, like America basically. DUN DUN DUN!

35:00: OH HI, I AM BACK, REPORTING AT YOU FROM THE HALLS OF PATCHOULI AND REGRET, AKA the coffee shop in my neighborhood. Let's watch the rest of this video!

Where we left off, McDougal was explaining why she didn't initially want to come forward about her affair with Trump, because she really had no hard feelings toward the guy. Unfortunately, rumors started to come out and she decided she had to get in front of the story. Long story short, she came forward to the people who own the National Enquirer, they passed on it, then she went to ABC, then she got cold feet. THEN Trump got the Republican nomination, and the Enquirer was suddenly interested again, not because they wanted to tell her story, but because they are BFFs with Trump and wanted to kill it. (Lawyer machinations are involved, just watch the thing.)

Also McDougal was bribed with a bunch of shit that was actually good for her career, and she bit.

47:45: When the "Access Hollywood" tape came out, Karen McDougal was "disgusted." She said he really wasn't like that to her, which just shows you what a smarmy lying fuck he is.

53:00: Karen McDougal and Stormy Daniels ("60 Minutes" on Sunday!) are very different people. McDougal really seems more pissed off about the way the National Enquirer people screwed her, but she doesn't hate Donald Trump. Stormy? HAAAAAAAATE him.

She notes that she's not talking about the gross parts (like what kind of small rodent Donald Trump's penis resembles) because that is not her point.

56:00: And it's almost over! McDougal says she wouldn't have any regrets about her relationship with Donald Trump, except for how he is married.

And what would she say to Melania, if she was watching this? "I'm sorry."

And there you have it! We've had a very nice TV time that was interrupted by a transformer blowing in our neighborhood and having to relocate to the hipster armpit coffee shop! Please tip your bartender by clicking below if you enjoy watching television with Wonkette!