Trump Tried To Reach Out And Touch Intel Chiefs. Wonkagenda For Wed., June 7, 2017 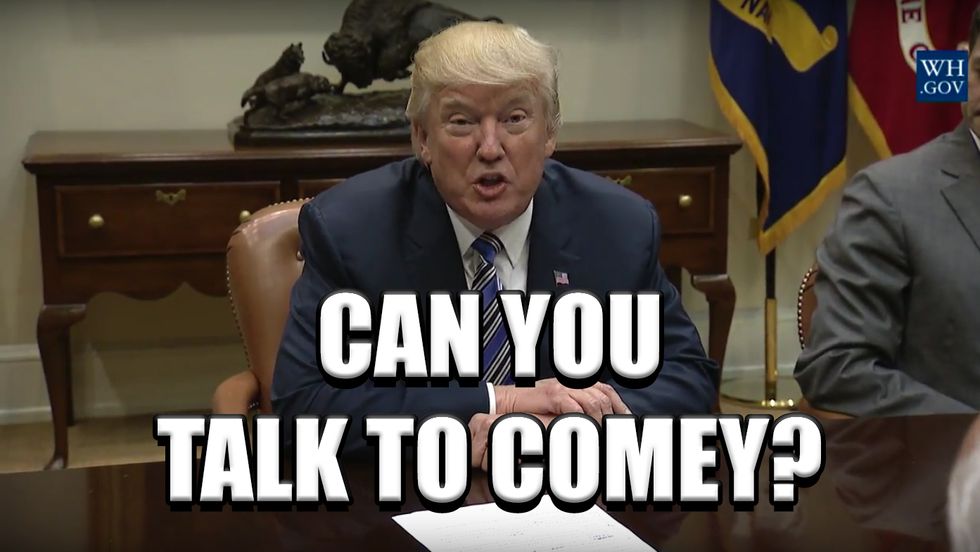 Morning Wonketariat! Here's some of the things we may be talking about today BUT BEFORE YOU DO, change your plans and come hang out with Yr Wonkette in Chicago tonight! We'll be at Margaret Burroughs Beach Park at 6:00 PM! That's right, WONKETTE BEACH PARTY! Including with ME, DOM THE INTERN! And we assume Robyn, she's not in yet. And also the Wonkette babby! Now onto your stories!

Trump nominated Christopher A. Wray as the Director of the FBI. He's a former Bushie (43), which shouldn't be a surprise to anyone paying attention.

Director of National Intelligence Dan Coats was asked to curb the Trump-Russia investigation during a private meeting with Trump shortly after taking office as if he were a common James Comey. Good thing he's headed to the Senate Intelligence Committee today!

Back in February, after Trump tried to creep on James Comey, Comey asked Jeff Sessions not to leave him in a room alone with Trump ever again, and considering how hands-on Trump can be it's hard to blame the guy.

Former Director of National Intelligence James Clapper thinks Trump-Russia is worse than Watergate, stating, "I am very concerned about the assault on our institutions coming from both an external source — read Russia — and an internal source — the president himself." OH SNAP!

The pro-Trump group Great America Alliance will begin airing ads attacking James Comey as a runway stealing "showboat," while Trump's aides try to distract him from Twitter with speeches and sequin-clad pee hookers.

Jeff Sessions offered to resign when Trump got mad at him after word leaked out that he'd met with Russian Ambassador Sergey Kislyak, but it looks like Sessions is going to go down in flames with the rest of the Trump train.

Mike Flynn was trying to jigger around with US and Russian military forces in Syria despite the foot stomping protests of Pentagon officials.

Trump's big infrastructure plan is really more of a suggestion and most of those big Republican ideas were already in motion under Obama, sans the bloated private contracts.

Harris County, Texas, is begging the SCOTUS to let it indefinitely jail poor people who can't afford to post cash bail and it just so happens to have landed on the desk of Justice Clarence Thomas. Oh, look, an opportunity for wings!

The House Freedom Caucus wants to cancel the August recess so that they can at least try to make it look like they're doing something other than sitting around with their thumbs up their asses, wasting tax-payer money and avoiding town halls.

The Kansas legislature voted to raise its taxes, effectively eliminating the slash-and-burn tax cuts enacted under Gov. Sam Brownback that have cratered the state's economy, but their fight has only just begun.

The Delaware House has voted to guarantee abortion rights for all the ladies who might have their slut pills taken away by Trump (but really, it'll be Mike Pence).

Jon Ossoff had a debate with Karen Handel last night and got Karen Handel to admit she doesn't support even a living wage.

Nobody wants to be seen in Chris Christie's shadow. That's not a fat joke, that's just the result of Chris Christie being repulsive jerk.

Trump quipped that Prince Jared is becoming "more famous than me," so clearly that means he's about to be "You're Fired."

Eric Trump went on Sean Hannity and said Democrats "aren't even people," because they're all being SO MEAN to his daddy, and it makes him sad. :(

Of course, Eric Trump was probably pissed about this article that details how Eric Trump helped his father funnel Ameros from a children's charity into the Trump Organization. And it's the Democrats who are "sad" and indecent people?

That billion dollar arms deal to Saudi Arabia is a bunch of bullshit as there doesn't appear to be any actual contracts, but rather "intended sales" that actually began under the Obama administration. FAKE NEWS!

U.S. intel agencies think that Russian fake news could be behind the crisis in Qatar, good thing Trump is tweeting out his lack of support for a U.S. ally with a massive naval base.

ISIS/ISIL/IS/whatever is claiming responsibility for a terrorist attack on the Iranian parliament in Tehran, and other historic and religious sites this morning, leaving 12 dead and injuring 39.

REXXON went to New Zealand and received a single-finger salute instead of a Maori dance, but he was probably too exhausted to notice those Kiwis since their entire country will soon be under water anyway.

This story about Trump's Tortilla Curtain being covered in solar panels looks like it was scribbled on a cocktail napkin by a fussy Newt Gingrich moments before throwing a tantrum at an Old Country Buffet.

LOL! Trump's blocking of Twitter users might be an unconstitutional violation of the First Amendment since he's technically limiting an American's ability to freely express themselves.

A number of tech companies and public interest groups including Amazon, Mozilla, Reddit, and Greenpeace are planning a day of action on July 12 to encourage support for net-neutrality as FCC chairman and genuine piece of shit Ajit Pai tries to take his "weed whacker" to Internet regulations.

And here's your late night wrap-up! Colbert paid tribute to D-Day and asked Cartoon Trump about his tweets; James Cordonwent across the pond only to run into Trump; and Seth Meyers made a point to lady-splain Wonder Woman.

Wonkette is ad-free and truly independent. Help us keep on keepin' on! Click and give us money below!