Trump Tries To Burn This Mother Down. Wonkagenda For Fri., June 2, 2017 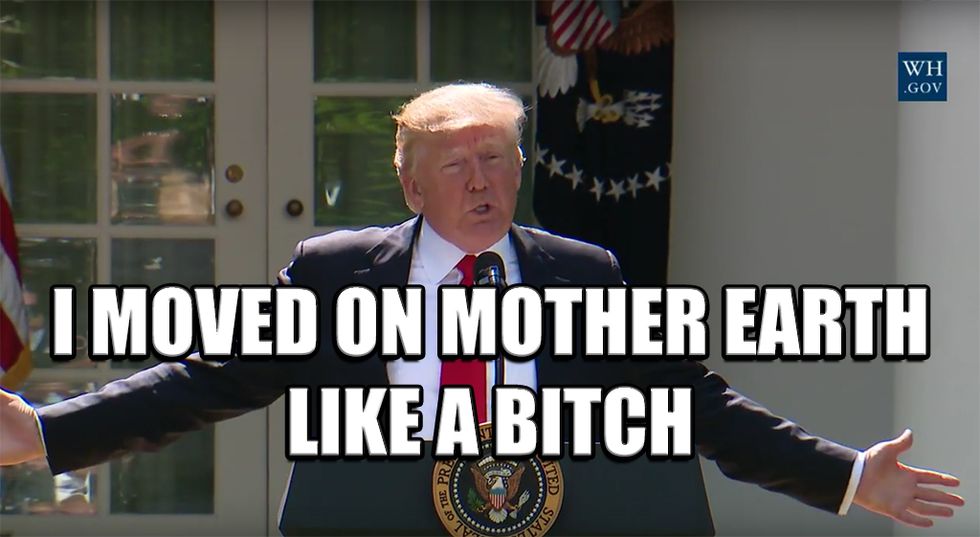 Trump's White House is trying to stop oversight requests from federal agencies in fear that more people might realize exactly how much they're getting fleeced by Donald Trump.

Some people think that Special Investigator Robert Mueller has a treasure trove of information in Trump's tweets since they offer a road map and timeline that could be used to establish criminal intent. OOOOHHH, somebody's gonna' get in TROUBLE!

The White House and Russia's state-owned bank forgot to coordinate their talking points about Jared Kushner as it looks like J-Kush may have been using his role as a public official to secure financing for his personal business. RUH-ROH!

Immediately after taking office, Trump's White House tried to drop Russian sanctions imposed by Barack Obama because reasons, and that hasn't gone over too well with Foggy Bottom or Capitol Hill.

President Kushner and Princess Ivanka are all, "whatevs, bros" after Trump grabbed lady liberty by the pussy and pulled her out of the Paris Climate Accords.

For their part, Trump's White House staff won't confirm whether or not Trump believes in climate change because they've never bothered to ask, since Trump's past statements speak for themselves. You know, the ones where he calls it a Chinese hoax, and "bullshit."

CEO's from across finance and tech sectors have condemned Trump's move to bail on the Paris Climate Accords including Tesla CEO Elon Musk, and Goldman Sachs CEO Lloyd Blankfein.

Leaders from Not America are pushing ahead with climate legislation and maneuvering businesses into renewable and green technology while criticizing Trump and the U.S. for pulling out of the Paris Climate Accords.

Trump's isolationist ideology is a bunch of horseshit as his economic advisors are quietly working to establish large international trade negotiations, and advising against the withdraw of multilateral agreements like TPP and NAFTA.

Betsy DeVos is attempting to staff minions who seem like nice counter-weights but the smell of rotting trash still hangs heavy over their heads.

The Office of Inspector General is criticizing the Justice Department's Civil Division for its handling of sexual misconduct cases after it tried to "pass the trash," failed to discipline employees for sexual misconduct, and failed to prosecute a senior official for stalking another attorney.

Looks like Corey Lewandowski and President Kushner are best friends now after the two were spotted hugging in the Rose Garden.

Brexit leader Nigel Farage is laughing off a story about his ALLEGED involvement in Trump-Russia now that he's been named as a person of interest by the FBI.

Kellyanne Conway crawled out from her spider hole to criticize Hillary Clinton as "joyless."

The friends of National Security Advisor H.R. McMaster are worried that Trump is using him and his three gold stars as a mouthpiece to shill garbage and offer cover. Maybe he has a taste for shit-sandwiches?

Trump has appointed Michael D'Andrea to run the CIA's Iran operations, and as a "chain-smoking convert to Islam" who helped locate Osama bin Laden, it raises questions of how hawkish Trump and Republicans are trying to get in Not America.

Yes, Trump's White House is trying to kill daily press briefings because reporters are nerds and we should hit them.

Tucker Carlson's Daily Caller appears to be operating as a 501(c)3 AND a for-profit business, allowing the Daily Caller to avoid paying millions in taxes as it publishes content for free (next to clickbait ads) and "trains" fresh-out-of-college students to be "journalists." Wow. So charity. Very martyr. Such Jesus.

A Pennsylvania man drove to the DC Trump hotel with an AR-15, a handgun, several cellphones and survival supplies and demanded to meet with Trump so he could rant about bringing down big pharma. Don't do that.

Will Twitter bots bring democracy to its knees as people push "covfefe" and conspiracy theories into the court of public discussion? Only if we're all "morans."

Facebook's shareholders are pissed about fake news and they want to know what their Wonderboy in Chief, Mark Zuckerberg, plans to do it about it beyond half-assed speeches and essays.

National Geographic has killed Bill O'Reilly's "Killing" series because it's "difficult," and they're certainly not kicking him while he's rolling around in the fetal position.

Here's a Nice Time story about how Obama met the "Most Interesting Man in the World" after his staff set up a super elaborate birthday party. Treat yo' self!

And here's your late night wrap-up! The Daily Show 'splained how Trump told the Earth to fuck itself, and then Trevor Noah explored the origins of covfefe; Jimmy Kimmel had some covfefe thoughts too.

And here's your morning Nice Time! IT'S FIONA! She's getting so big and sassy that she needs a bigger pool!

If you don't give us money we can't give you news and 'splainerings! Hurry it up please!