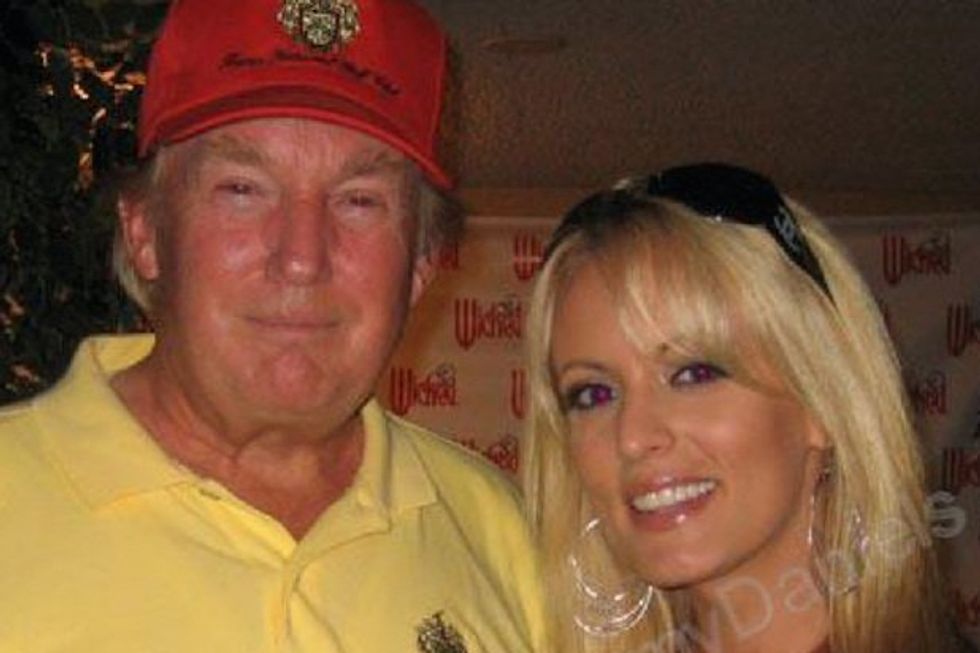 Photo by the liberal liars at the WSJ.

Later in the evening, Daniels allegedly called Evans and tried to convince her to come a party in Trump's room, but was skeeved out when she heard Trump begging, "Oh come on Alana, let’s have some fun! Let’s have some fun!" Evans says that she and Daniels met up the next day where Daniels dished a little too much dirt.

She tells me, ‘All I’m going to say is: I ended up with Donald in his hotel room. Picture him chasing me around his hotel room in his tighty-whities...'

Trump supposedly promised Daniels a key to some fancy Florida condo and a spot on The Apprentice, and she began appearing with Trump at random Trump-branded events, like the launch of Trump Vodka and the Miss USA pageant. Daniels ex-husband says that Trump used to call her up a lot, saying "it would be surprising, but not shocking" if Daniels was banging President Puss-grab. Gross.

This wouldn't be the first time Trump has fucked around on his wife. He was famously banging his second wife while he was still married to his first, and he used to call up tabloids under fake names to brag about who he may or may not be currently screwing just to get people to pay attention to him.

If true, all these affairs would have taken place shortly after he married Melon Trump, and cocktail napkin math says that she would have been pregnant with their son, Barron, at the time. What a winner.

We're ad-free and supported by readers like you who LOVE our educational 'splainerings and newses. Throw money money at us we stay that way!