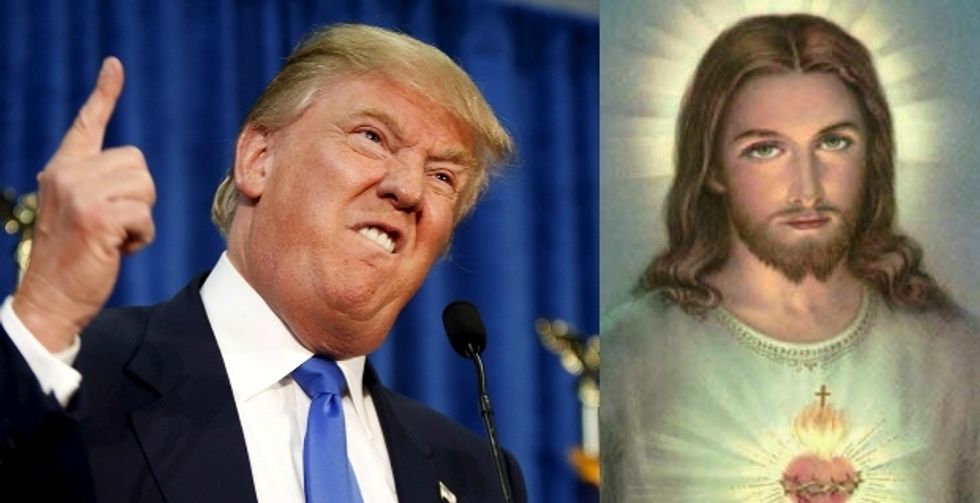 The Spirit Of The Lord cummeth all over the White House! And it's about time, after eight years of being governed by a secret Muslim whose Christian pastor hated America, and all the presidents who came before that, none of whom were Anointed By Christ like Donald J. Trump, whose almost nonexistent sins have been thoroughly washed by the blood.

We've known about Trump's deep abiding personal faith for a long time. He's a total fangirl for Jesus, because he knows Jesus was an egotistical blowhard like him. He keeps his favorite Bible verses close to his vest, because that is Eyes Only intelligence between him and his God. He is like "NOM NOM NOM" when the priest gives him the little Jesus crackers, because he is so hungry for Jesus in his belly on those rare occasions when he attends church. And now we are learning from the Christian Broadcasting Network that the Trump White House is a NSFW, non-stop Bible orgy with so many Bible studies even Jeff Sessions is hurling his panties at the altar, ALLEGEDLY:

A spiritual awakening is underway at the White House.

Some of the most powerful people in America have been gathering weekly to learn more about God's Word, and this Trump Cabinet Bible study is making history.

They've been called the most evangelical Cabinet in history – men and women who don't mince words when it comes to where they stand on God and the Bible.

That's nice. Does Trump attend? Nah. CBN says he is "invited," which means he hasn't grabbed one Bible by the pussy since the day he was inaugurated. But Betsy DeVos and Jeff Sessions and Rick Perry and Sonny Perdue and Tom Price and Mike Pompeo go. Oh, and Mike Pence wants to come too, when he has time.

This guy Ralph Drollinger has a good old fashioned witnessin' organization called Capitol Ministries, and he teaches the Bible study for all these good Christian folk, then sends them out into the world where they implement Jesus's message by trying to take healthcare away from people and saying bitches be lyin' when they say they've been raped.

No for real, Drollinger says he does Bible to these cabinet members, then he sees them on TV doing the exact same Bible he taught them:

"He'll (Jeff Sessions) go out the same day I teach him something and I'll see him do it on camera and I just think, 'Wow, these guys are faithful, available and teachable and they're at Bible study every week they're in town,'" Drollinger said.

Which time was that, when Sessions went on TV and Bibled just right? When he decided he wanted to Make Civil Asset Forfeiture Great Again? Is that some kind of "render unto Caesar" crap? What about his racism and his work to chip away at voting rights and civil rights? The Bible says Jesus was allegedly always loving outsiders and healing the sick and caring for the least of these, but those are probably just liberal agenda translations that conveniently forget to include how the Son Of God finished most of His sermons with the words, "Unless they are a black or a Messican, in which case disregard everything I just said. Also too, NO HOMO."

Drollinger has high praise for Mike Pence, the vice president of America who calls his wife "Mother":

"Mike Pence has uncompromising biblical tenacity and he has a loving tone about him that's not just a noisy gong or a clanging cymbal," he continued.

FACTCHECK: Mike Pence is TOTALLY a noisy gong and a clanging cymbal, by which we mean fuck him sideways.

Also probably bring condoms because ain't no party like a Trump Bible party and we just bet Rick Perry, Tom Price and the others are HOT 2 FUCKING TROT once they're done getting Bibled by old Ralph.

Wonkette salaries are fully funded by readers like you! If you love us, click below, to pay our salaries!