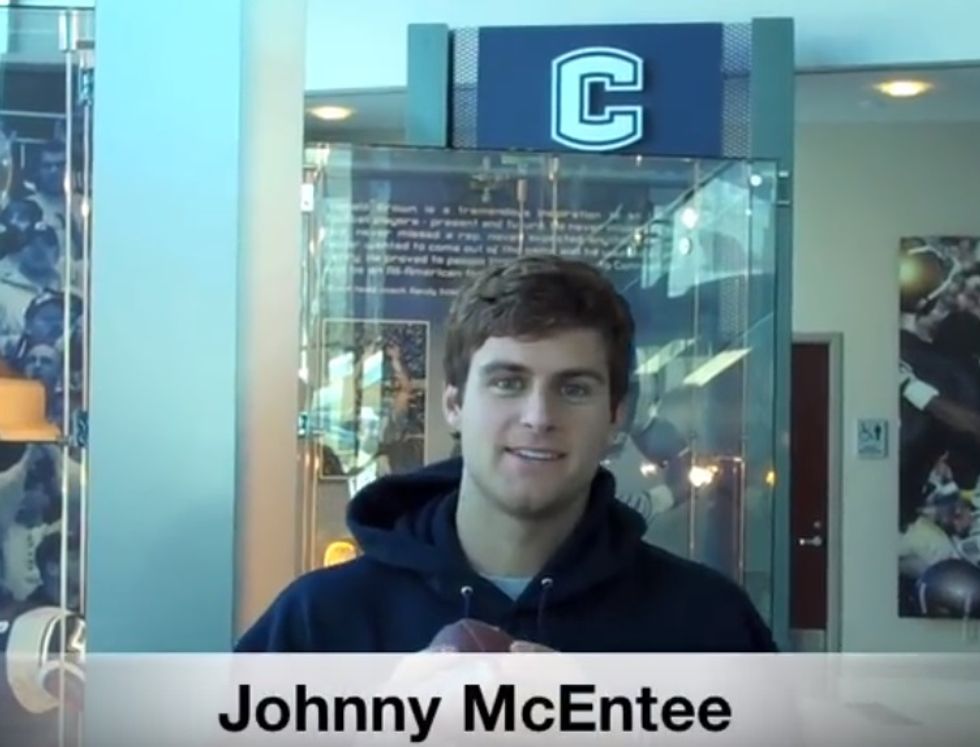 We bet when you clicked this headline, you thought "Well OK, Wonkette, we're not sure if Rex Tillerson was the MOST fuckable guy in the Trump administration, but to each their own." But no! There has been another sudden White House departure, and it is John McEntee, AKA "Johnny" (as everybody in the White House knows him), who was Donald Trump's "body man." He wasn't fired on Twitter like a common Tillerson, but instead got his asswalked right outta the White House on Monday afternoon -- they didn't even let him go get his jacket! -- because the Secret Service is investigating him for Serious Financial Crimes, which means he couldn't get a full security clearance. Uh oh! Did Donald Trump hire the best people again?

What kind of financial crimes, Johnny With The Good Hair?

People close to Mr. McEntee said problems related to online gambling and mishandling of his taxes prevented him from gaining the clearance necessary for the role. The Secret Service is investigating Mr. McEntee for those issues, according to a law enforcement official.

"Mishandling his taxes" got him perpwalked out of there? Yeah, we're gonna call bullshit on that.

McEntee will land on his feet, so don't you worry about him. After being unceremoniously removed from the White House, he was immediately hired by the 2020 Trump campaign, so he won't be too far away.

We saw several headlines about this story before we saw the original report in the Wall Street Journal, the one that made us go DAMN, on account of the picture of McEntee it used, what yr Wonkette does not have the rights to use. Go ahead and click here. We'll wait.

Or you could just look at this picture, from a viral video of McEntee, AKA Johnny Mac, doing football trick shots, back when he was the quarterback at the University of Connecticut:

Oh hi, Tom Brady's chin dimple on a better face that also has the benefit of "not being Tom Brady"! How are you doing today?

Or you could look at this free embed from Getty Images, because unlike Shutterstock, Getty Images is not a fucking ball sack that refuses to give free embeds to mom 'n' pop blogs like Wonkette:

With Johnny's departure, we think that means this is the hottest guy in the White House now:

(Also, to any Jared Kushners protesting that there is too a cute guy still working in the Trump White House, and their name is Jared, oh honey, you lost your security clearance and kinda left the White House weeks ago, even if you are still technically "there." Sorry.)

Reportedly, everybody in the White House is going to miss Johnny Feel Good very much. As Trump's "body man," he was the guy who changed the White House clocks for Daylight Saving Time and promised the president the big scary stairs wouldn't bite him as he brought him down from the White House residence every day around 11 AM and took him back up for Executive Time in bed a few hours later.

According to a Politico profile, sometimes he was Johnny With The Good Jokes:

For months, he has played a practical joke on unwitting staffers by handing them a note, “signed” by Trump, whose signature McEntee has perfected. The note usually gives the staffer a hard time about something, or an “atta-boy” for all of the work they are doing. Only later does McEntee reveal that he wrote it, as other staffers usually start laughing. Many hang on to the notes as keepsakes. “For context, it’s about having fun,” one former White House staffer hastened to explain. “Not trying to undermine the U.S. government.”

Awwww, the Trump White House tries to have "fun" sometimes! That's cute. It's almost like it's a real presidential administration!

That Politico profile gives a good biography of this dude none of us had ever heard of, who is beloved within the walls of 1600 Pennsylvania, and who is now fired. As we noted, he used to play football at University of Connecticut, later worked in social media for Fox News, and then for some weirdo reason fell in love with Donald Trump in 2015 like some kind of idiot, so he knocked on the door at Trump Tower and begged for a job. He got one, obviously! Politico describes McEntee as a "teetotaling former altar boy" (lame) who went on literally every trip with Donald Trump. Look, here he is on Air Force One, with a bunch of douchebags and Hope Hicks:

One more thing before we go! Wonk pal Charlie Pierce points out a very important thing about the departure of this dashing "body man" to total PINO* Donald J. Trump, and it is that the "body man" KNOWS EVERYTHING. In essence, Pierce is just saying that if Johnny Boy here is having some, ahem, trouble with the law, there might just be some "influential law-enforcement types" hanging around Washington right now, who might be able to help him out.

But only if he opens that purty mouth and SPILLS.

Good luck, Johnny Mac, you are the sexxxiest Trump crimer of all!

*PINO stands for President In Name Only and we just made it up. Pass it on!