TRUMPCARE Back From The Dead! Wonkagenda For Monday, Sept. 18, 2017 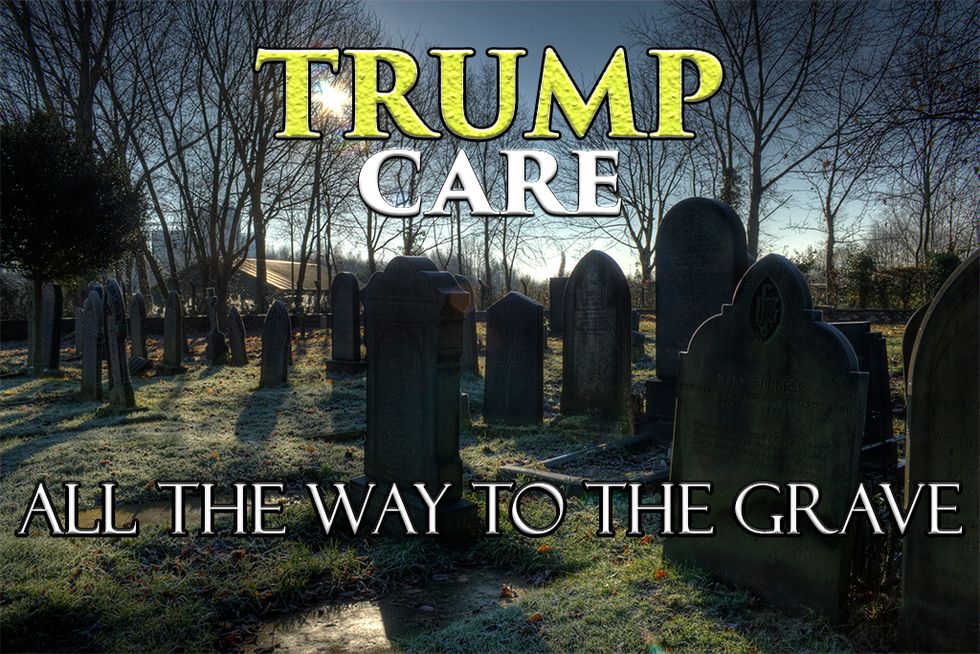 GOOD MONDAY MORNING, WONKERS! We have MANY newses today, but FYI: Evan is on vacay, and Linda and I are in St. Louis covering the protests, but all systems are still go! Here's some of the things we may be talking about today!

The Cassidy-GrahamCare (TrumpCare 3.0) bill is looking like the GOP's last best hope to repeal ObamaCare and fuck the poor people and youths who kind of enjoy not going broke for the sniffles. Don't sleep on this one!

The infighting of Trump's legal team has gotten hilariously out of hand, spilling out into a popular DC steakhouse where one of Trump's lawyers was overheard bitching about another lawyer over his cooperation in the Trump-Russia investigation. LOL!

Over the weekend, Trump tweeted some stupid insults about North Korea, then sent some adults on teevee to warn about the dangers of dealing with a nuclear-capable leader who is "reckless [and] irresponsible."

HR McMaster and REXXON are clarifying that the US is definitely, maybe, possibly still thinking about the Paris Climate Accords after jamming a foot in the door that former President Bannon tried to close. [Archive]

Interior Secretary Ryan Zinke thinks we should shrink the size of 10 national monuments, including protected areas like Bears Ears, Grand Staircase-Escalante, Gold Butte, Cascade-Siskiyou, and Pacific Remote islands and the Rose Atoll so that the poor, besieged corporations can frack and fuck the land until it's dead.

Trump is in New York this week and set to address the UN, and it's anyone's guess as to who in the world he's going to insult.

Donald Trump needs the UN if he's going to prevent a nuclear catastrophe, but his history of dickishness towards the global governing body is messy, spans decades, and even includes his New York trash palace.

Worried about being associated with Trump, the number of charity events at Trump properties has tanked, while political organizations are flocking to win favor by booking events at his trash palaces and golf courses.

As Alabama's special election to fill Jeff Sessions's Senate seat gets ever closer, Trump is going all-in on Luther Strange and will hold a campaign rally to express how much he luurrvvss him, which is weird because you'd think he might back Mitch McConnell's arch enemy, Roy Moore.

In a surprise move, the FCC is asking Sinclair Broadcast Group to cough up some more details on its proposal to buy Tribune Media, and "justify how this merger is in the public interest." [Legal Docs]

A US Air Force Chaplain at a base in Ohio thinks that anyone in uniform not worshiping Christian Jesus is in service to Satan. I wonder if that includes Jewish Jesus, Black Jesus, tuxedo t-shirt Jesus, and Punk Rock Jesus? [h/t Wonkette Operative Erin!]

Democratic 2020 hopefuls are increasingly becoming the target of Trump as he lobs tweets and bombs, hoping to knock them off their game sooner rather than later.

There's people straight-up asking if Trump's administration is simply too stupid to accomplish anything in Washington, or if they're succeeding at imploding the size and reach of the federal government.

Local governments have decided to flip the script and are suing everyone, from parents to journalists, for filing FOIA requests in order to stall investigations and avoid paying legal fees. Dick move!

Vermont is toying with a new healthcare initiative that rewards doctors and hospitals for healthy patients by giving Ameros for creating healthier communities in an attempt to limit health care spending.

Officials in Baltimore are trying to figure out how to prevent thieves from ruining their bikeshare program after they quickly figured out how to rip bikes out of docking stations.

As the coup to reverse every last thing Obama did continues, REXXON is mulling closing the US embassy in Cuba, in retaliation for "THE INCIDENT" that left several diplomats and their families sick and partially deaf.

While Trump gloats on Twitter about cutting off gasoline in the DPRK, intelligence nerds are throwing up their hands in frustration that his administration was supposed to focus on rare and volatile rocket fuel. OOPS!

Al Jazeera is pissed this morning after Saudi Arabia asked Snapchat to start blocking its content, furthering tensions in the Middle East with Qatar and reinforcing the notion that social media is a bad source for news. [Archive]

Bill O'Reilly is still full of sads about being "You're Fired" from Fox News, and blames "forces of evil and darkness," which is what he calls his dick.

Nobody gives two soggy turds about the third-person memoir of Roger Ailes's wayward protégé, and all he has to show for it are night sweats and a hearty blackballing. This one is weird.

People are raising red flags about a crime reporter who may have bullshitted large chunks of his investigation into Baltimore's drug trade after local reporters found it impossible to verify his stories.

At 92, Hal Holbrook is retiring his amazing one-man show, "Mark Twain Tonight." Holbrook has been portraying Twain since 1954, and reportedly never gave the same show twice; often letting the character reflect on current events. Here he is telling youths about government lies and slavery.

The Emmys were pretty brutal towards Donald Trump last night, from host Stephen Colbert's monologue, and his phenomenal opening musical number, to a special guest appearance by a podium-crashing Sean Spicer. Top awards went to SNL, VEEP, and Handmaid's Tale.

And here's your late night wrap-up!Chelsea Handler has thoughts on white supremacy after Labor Day; The Daily Show shared some thoughts about Donnie and Ivanka's bullshit excuses; and Bill Maher is taking back states' rights.

And here's your morning Nice Time! Asian small-clawed otters! They're so squeaky!

Wonkette is supported only by readers like you, so give us money -- we got bills and need more coffee!