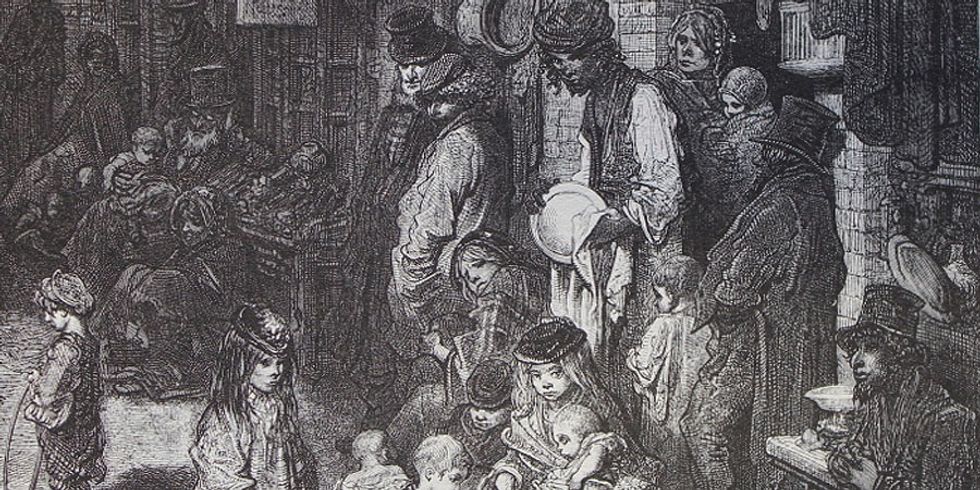 The Trump budget proposal, which like all presidential budgets is make-believe because Congress will do what it damn well pleases, is nonetheless full of not only imaginary revenue and spending priorities, but full of some genuinely terrible ideas for slashing the public safety net and replacing it with a nice big bucket of shame, which ought to finally motivate poor people to stop being poor and go out and become rich. Oh, sure, there's the predictable rightwing wet dream of rolling back the Obamacare Medicaid expansion and converting what's left of the ACA to a block grant to states (with far less funding), plus slashing billions from housing assistance, and just about everything else. But what's really getting attention is an insane proposal to cut benefits for the Supplemental Nutrition Assistance Program (aka food stamps) by half and replace the benefits with a monthly delivery of commodity foods from the US Department of Agriculture.

These millionaires aren't going to tax cut THEMSELVES you know!

Office of Management and Budget director Mick Mulvaney, the genius who assured us last year that Meals on Wheels sounds nice but is actually just wasted on old people, claimed the canned/boxed commodity packages would be a "Blue Apron-type program," except that instead of having fixin's for a single meal delivered, poor families would have a big chunk of their monthly menu determined by whatever the government chooses for them every month. States would have "flexibility" in how the food would be delivered, which might mean they'd deliver the boxes by mail, or maybe just tell everyone in Montana, say, to drive to Bozeman to pick up their monthly supplies.

You see, children, it's evil when the government provides assistance with health care, because that's telling you which doctor you can go to and a violation of your freedom, like Hitler. But if the government tells poor families their diet will depend on whatever shelf-stable commodities get tossed into a monthly "America’s Harvest Box," that's good, because then other Americans will be freed from the anguish of seeing poor folks using an EBT card to buy groceries Tucker Carlson doesn't approve of. And the poor can suck it, because they should be grateful they get anything, shut up.

The food boxes would contain "100 percent US grown and produced food" and would include stuff like peanut butter, shelf-stable milk, canned meats and fruits, and cereal -- probably of the blandest generic kind. No fresh vegetables or meat, which are of course what you get in a REAL Blue Apron type meal, so poors will still have to offend decent people at the grocery store if they want something green.

The Trumpers don't say anything about whether the boxes would take into account special dietary needs like kids with food allergies or diabetes (they won't), and there's definitely nothing in the proposal about religious dietary restrictions, because can you imagine the screaming about "creeping Sharia" if USDA were talking about delivering halal food boxes? Remember, this isn't a real proposal, it's vaporware, an attempt to get rightwing buzz that may eventually result in legislation. It's an attempt to throw Food Stamp recipients out the Overton Window, because hasn't every wingnut said "Those people should get a monthly shipment of beans and rice and make do with that"? It's not going to happen this year, but it's definitely intended to make boxes of Freedom Food an official part of the discussion about Those People.

Politico explains where this cockamamie idea came from, and where it didn't: It's the brainchild of some of the best brains of the USDA, especially Ag secretary Sonny Perdue, according to USDA spokesman Tim Murtaugh.

The idea that USDA would provide millions of low-income people packages of food on a national scale has not been floated by conservative think tanks, promoted by industry, or sought by previous administrations. Murtaugh said the concept was developed internally at USDA. Mulvaney on Monday credited Perdue for it during a briefing at the White House.

"Secretary Perdue wanted to give it a chance," he said. "We thought it was a tremendous idea."

And how is this tremendous idea being received by people who actually have worked with food programs, and are not just elevated veterinarians like Perdue (despite the name, he's not related to the chicken-business Perdues) and people who get all their best ideas from "Fox & Friends"? Many thought it was some kind of weirdass joke.

Kevin Concannon, who oversaw SNAP during the Obama administration, was aghast when he saw the proposal.

“Holy mackerel," said Concannon, who said it reminded him of when poor people had to line up and wait for local officials to dole out food and other welfare benefits. "I don’t know where this came from, but I suspect that the folks when they were drawing it up were also watching silent movies.”

Other anti-hunger advocates said the concept was reminiscent of wartime rations or soup lines during the Great Depression. The Food Research and Action Center, a prominent nonprofit group, called the harvest box idea “a Rube-Goldberg designed system” that would be “costly, inefficient, stigmatizing, and prone to failure.”

Somewhere, Chris Cillizza could be heard typing up a draft of a column declaring that even if it's a terrible idea, it demonstrates the administration's willingness to try new things and shake up the paradigm.

USDA claims it would be able to purchase and distribute the food boxes at "approximately half the retail cost" of the contents, which seems dubious; the proposed program would be combined with existing programs that distribute commodities to schools, food banks, and other groups. But as Politico notes, any such new program wouldn't exactly come cheap:

[A] plan for SNAP recipients would be an exponentially larger undertaking, covering more than 16 million households. While grocery and meal-delivery companies are growing more common, their scale is still relatively small and largely confined to urban areas. Blue Apron, for example, has around 1 million customers.

And then there's the teensy detail that this would hit grocery stores hard: The Food Marketing Institute, which lobbies on behalf of major food retailers, has already come out against it, since the stores would lose billions of dollars they now get in SNAP payments.

Again, they don't really have to worry just yet, since this budget proposal is all just the beautiful dream of Ayn Rand fans who wish the villainous landlords in Dickens had gotten more sympathetic treatment. But now that the idea's been released in the wild, get ready for nine million "that's a great idea!" segments on Fox, plus some morons reminiscing fondly about how much, as poor kids, they loved government cheese. The real appeal of this idea is that it's another way to remind the poor that they're terrible people with limited options, and the government will now send them a monthly package of Shame Food to underline the point. We can hardly wait for the cheerful USDA menu hints for fun things to make with pinto beans.

Yr Wonkette is supported by reader donations. Please click here to help us keep the writers fed. Your donation actually does entitle you to dictate our diet!