Trump's Call To 'Help' Charlie Gard Is Both Cynical And Cruel, And Fuck Him 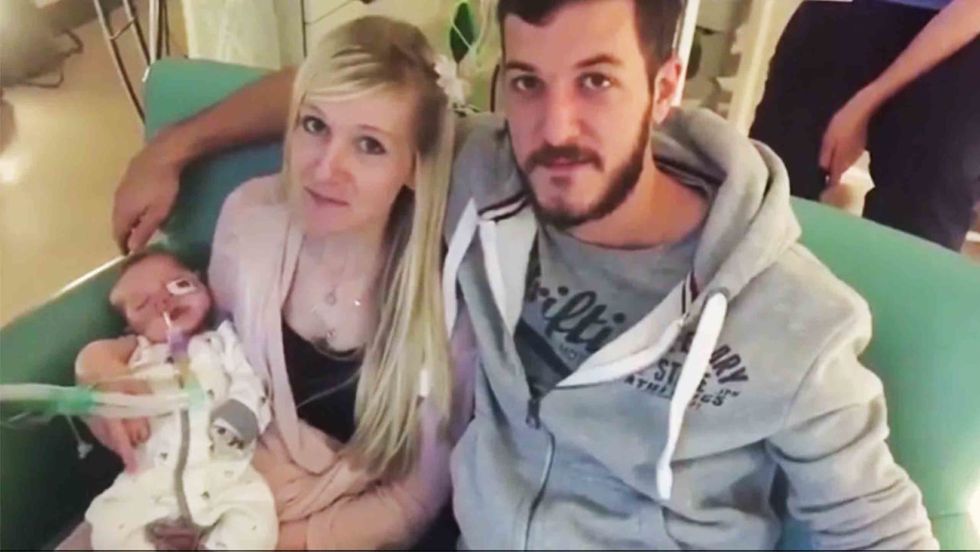 Today, our president sent out a tweet that was not about women bleeding or him wrassling a news media organization. A tweet meant to make him look like a real nice guy who totally cares about people and whether or not they live or die. A tweet that I would actually say is the most sickening and infuriating thing he has ever tweeted.

Charlie Gard, if you are not aware, is a terminally ill 10-month-old in the UK with a rare genetic disorder called mitochondrial DNA depletion syndrome. As a result of this disease, the child cannot move his arms or legs, nor breathe without help, and is also suffering from extensive brain damage. It's a tragic, tragic situation and one cannot help but feel for his parents, who want nothing more than to try to save their child.

Doctors, however, say that prolonging treatment would only prolong the child's suffering -- and the courts have sided with them, and have decided to allow the hospital to take Charlie off of life support. His parents have been fighting to bring him to the United States to take some experimental medication, which doctors at the Great Ormond Street hospital (one of the best pediatric hospitals in the world) say would not work. Not only because it's experimental, but also because it's only been tried by a very small amount of sufferers, and none with the same faulty gene as Charlie.

So basically, the courts are telling the Gards that they can't keep their baby on life support or take him to the United States because doing so would be cruel. Because the child would be in pain.

“[I]t was likely that Charlie would suffer significant harm if his present suffering was prolonged without any realistic prospect of improvement, and the experimental therapy would be of no effective benefit.”

They are also not letting the Gards take their child home to die, because what they want is for Charlie to be in the least amount of pain possible as he goes. As hard as that is to hear, it's the right thing to do.

The fact that a man who is about to let 32 million Americans (yes, that's the number he's calling for, higher even than the 22 million who would have their insurance stolen under the Senate Republicans' plan) go without health insurance because coming up with a replacement is just TOO HARD, has the gall to grandstand on this particular case is absolutely sickening. Save some kids in America, whydontcha?

This, from a man who has proposed massive cuts to children's healthcare? Whose plans for Medicaid and health insurance will likely hurt millions of children across the United States? Whose party repeatedly chants "Health Care Is Not A Human Right" like a snide, sadistic mantra? Who is totally A-OK with children growing up in poverty and not having enough to eat because their parents were bankrupted by their own medical bills?

I wonder! If Charlie were an American baby whose parents could not afford his treatment, if Trump would be so eager to help. Because I'm pretty goddamned sure he would not.

I feel like I need to say more clever things and throw out more clever statistics, but all I want to say is HOW FUCKING DARE HE. How dare he not care about the lives of children in this country who won't be able to have health insurance soon. How dare he feign caring about this one child but not give a shit about refugees escaping war-torn Syria? How dare he pull this shit while his party pushes to reduce the number of children who qualify for free meals at school. While he cuts Medicaid and anti-poverty initiatives. After reinstating the gross Mexico City Policy which will result in adults and children overseas being unable to get treatment for malaria and HIV because the hospital they get them from also happens to perform abortions? After pushing for deregulation that will make our water less safe to drink? Which could also make children sick? While promoting ridiculous anti-vaccination conspiracy theories that can and do lead to children getting sick and dying from preventable illnesses? How. freaking. dare. he.

I could go on. He doesn't actually give one shit about that baby. What he cares about is trying to make it look like the UK -- WHICH HAS UNIVERSAL HEALTH CARE FOR EVERYONE -- is somehow the bad guy here, and he is the good guy, even though he is 100% A-OK with people here not being able to afford medical treatment. In fact, the underlying gist of this statement is really "See how things go wrong when poor people get to have health care?"

I just... for someone who is so committed to letting poor people die of treatable illnesses to decide to do this grandstanding for just one child, in another country, with an untreatable illness? A child who will only suffer from treatment? It's positively galling. This is not what caring about human life looks like.

Please give us some money so we can afford to see doctors! Click below!