Trump's Healthcare E.O.: If You Like Your Doctor, You Can Buy A Lotto Ticket 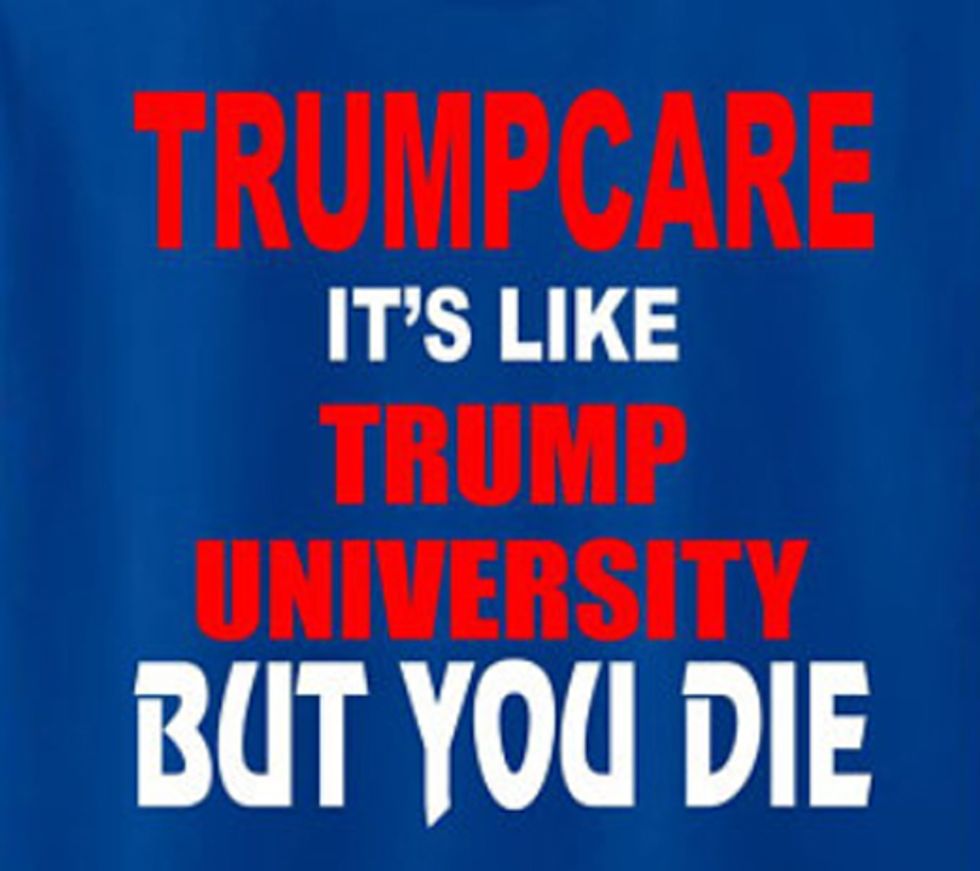 Since congressional Republicans failed to do his bidding and murder Obamacare, Donald Trump signed an executive order today that has the potential to wreck the individual healthcare markets that are a key part of the Affordable Care Act. That's in addition to the many steps his administration has already taken to drive down enrollment and increase uncertainty for insurers in the individual market.

The executive order won't immediately result in any changes to the health insurance system; several federal agencies will have to write new rules to put the package of changes into place. Those rules will be subject to the sometimes-lengthy federal rule-making process, so there will be chances for public comment (which the administration will ignore) and lawsuits against the new rules. Since this is an Executive Branch process, it also won't do a hell of a lot of good to pressure your members of Congress, which is delightfully sneaky, although it's possible that Congress could pass a law to put a stop to some of this shit. You know, if Congress ever passes any laws ever again.

Let's take a look at how this latest incarnation of TrumpDon'tCare will screw up our healthcare system. We'll be cribbing from 'splainers at WaPo and Vox, which you should look at if you're a detail junkie. (Detail addiction will not be covered under the new scheme.) But first, a quick summary from Virginia Democratic Senator Tim Kaine:

Get ready to hear a lot about association health plans (AHPs), which make up the main prong of the executive order's attack on the ACA. These are insurance policies sold to groups of similar small businesses that join together -- an association of mommyblogs or of sofa and quill merchants, for instance -- to purchase health insurance. The idea is to give small businesses the purchasing power of a large employer. We'll turn the 'splainering here over to Vox's Dylan Scott:

Before Obamacare, national associations could pick and choose which states’ insurance rules they wanted to follow and use those rules to guide the plans they offered nationwide. The bakers association could choose to follow the rules for, say, the Alabama insurance market, which mandates coverage of relatively few benefits, for all its bakeries in New York, a state with many mandates.

The result was often health insurance that skirted state rules and was a better deal for businesses with young and healthy employees, who are likely to prefer skimpier health plans.

Obamacare stopped that kind of junk insurance, treating AHPs like small businesses and requiring they provide a full set of essential health benefits and protections for folks with preexisting conditions.

The Trump executive order calls for new regulations on AHPs that would allow associations to admit businesses from multiple states, and would allow the plans to avoid the ACA rules that apply to small business and individual plans, opening the way for large association plans that could sell stripped-down policies that would cost less -- and cover as little as the eventual regulations allow. Expect the agencies to allow plans that would be cheap, but would only cover a portion of the cost of catastrophic illnesses. Those could prove attractive to companies with lots of young, healthy buyers, and then the Obamacare exchanges would in effect become a high risk pool in which older, sicker people would enroll -- and without the broader pool of subscribers, premiums would skyrocket and the markets could go into a death spiral. Suck away enough people from conventional insurance, and this could presumably create instability in the market for employer-based insurance, too.

There is this line in the executive order that seems to be there solely so Trump can say, "See? It'll protect people with pre-existing conditions!" But we won't know the real effects until the actual regulations are written:

The executive order doesn't specify whether individuals would be able to buy into AHPs, but maybe! And that too would be bad news for the ACA's exchanges:

But according to a source familiar with their drafting, the regulations resulting from the order could be written to allow self-employed people to buy into the association market, which would be an even bigger blow to Obamacare.

“That is a question that will be considered in the rulemaking process,” a senior administration said Thursday, indicating that self-employed people could potentially be allowed to buy into association plans.

Tim Jost, a law professor at Washington and Lee University, told Scott before the EO was signed, "It will destroy the small-group market [...] We’ll be back to where we were before the Affordable Care Act." Remember how many people were angry they couldn't keep their shitty plans because the ACA required health insurance to actually insure stuff? They'll love this new crap, and once Trump crashes the ACA markets, it may become the norm, hooray.

The other major part of the EO is language calling for looser regulation of "short-term limited duration insurance," the kind of policy that in the bad old days you'd buy if you were between jobs or otherwise wanted short-term insurance that gave minimal coverage. The plans are still available, but limited to three months, tops, since they're exempt from the ACA's requirements for essential benefits and protections for preexisting conditions. If you lose a job that has insurance, you qualify right away for an exchange policy to replace it, so there's little reason for the short-term plans to exist except for situations where someone knows they'll only be without real insurance for a very limited time. Trump's EO may make it possible for skimpy "short term" plans to last up to 364 days, or even be renewable again and again, which would be another way to shift temporarily healthy people into chep crappy plans and leave the exchanges to older, sicker people, with the resulting higher premiums. The goal, again, is to make the ACA markets crash and then say, "See? Obamacare was unworkable."

What Can We Do To Stop This?

Oh, dear Terrible Ones, you know this one: Organize. Speak up. If you're currently in an exchange plan, make sure you and everyone you know signs up during the much-shortened open enrollment, November 1 to December 15. Call your representatives and tell them you won't tolerate the president tearing down Obamacare from within. Organize more. Work to get Democrats elected and for fuckssakes stop refighting the 2016 primary. Try not to get too discouraged, and read Saint Molly Ivins if you need inspiration. Raise hell. Did we mention Organize? This is probably the biggest threat to America's healthcare yet, and we can't let it happen.

Yr Wonkette is supported by reader donations. Please click here to help, and we'll all fight this idiot together.

Help keep us in Tylenol and gin! Click to contribute!