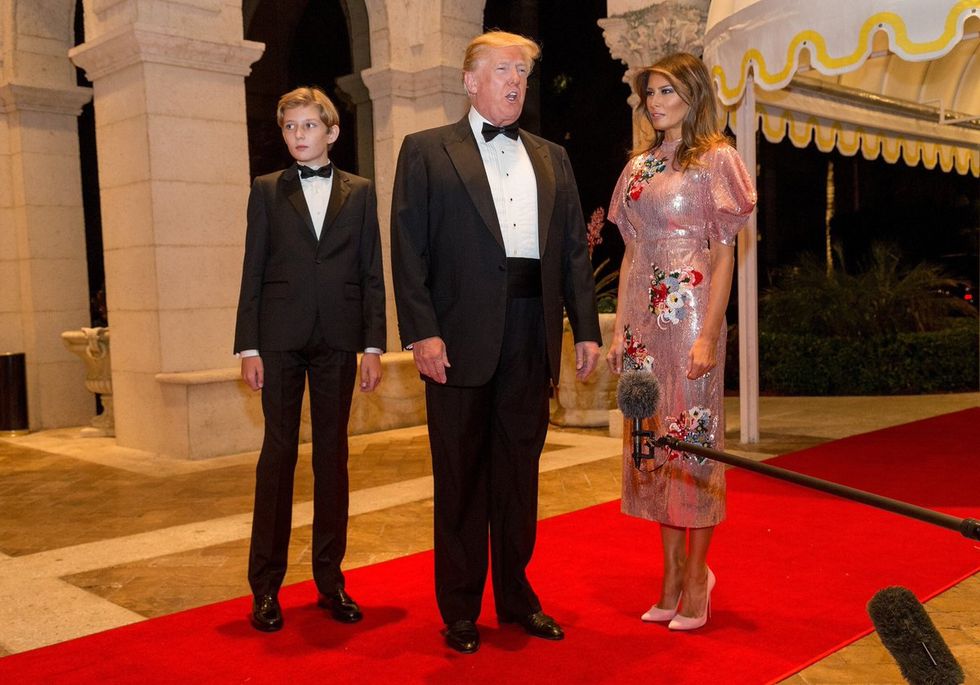 How did you ring in 2018? Did you stay in like an old person with all your friends and eat and drink one million things and maybe you didn't even get to eat black eyed peas yet because you weren't really "awake" for New Year's Day?

Or did you spend hundreds of ameros so you could watch the balls drop at Mar-a-Lago with the US American president? Man, if you did that, you are a good-for-nothin' DUMBFACE, because we've seen the party pictures, and that shit was a DISASTER. Like this picture, which was not photoshopped:

Here, have a full video of the First Family being Wild and Crazy Guys:

There is so much going on here. First of all, poor Barron always looks so unhappy, but we're pretty sure that's just how things are when your dad is Donald Trump. Melania, who also looks just thrilled, is wearing some kind of shower curtain, but it is a fancier shower curtain than they sell at IKEA, probably because #NewYears. Meanwhile, Donald is one of the only men alive who looks like shit in a tuxedo.

But let's get to the real party pictures! Eric Trump was there:

Javanka was there all "Let's act like we're not going to jail, for the sake of the children":

Anyway, the point is that joy was experienced, tremendous joy, so much joy you're gonna get sick of joy. See?

There's a sad part of this story, though. You see, it was Donald Trump Jr.'s 40th birthday.

Now, don't worry, he got to go to the party. It's not like he was forced to stand outside the gate while the security guard said FAKE NEWS! when he said his name was "Donald Trump Junior," which means it's probably just a mistake his name isn't on the list, right? Junior even got a picture with his dad, and managed to somehow look like he's literally peeing his pants in excitement and trying to muster up the courage to ask for an autograph:

Junior got this cake:

But we should point out that, as noted by the Huffington Post's Ashley Feinberg on Twitter, there is no indication Donald The Old told his son happy birthday or gave him a flight of Grade A pussy or even acknowledged his existence on his big day. Sure, the hired entertainment sang "Happy Birthday" as the cake was presented, but guess who wasn't in the video? That's right, DONALD TRUMP WAS NOT IN THE VIDEO.

And Daddy certainly did not find time to tweet out "HAPPY BIRTHDAY TO MY FIRSTBORN SON, WHOM I MAY OR MAY NOT ACTUALLY BE PROUD OF." Meanwhile, if Ivanka so much as belches in the West Wing, she gets a congratulatory tweet from Dad.

Junior posted this on Instagram, and we don't think we're being unfair if we interpret it as a pained yelp for attention:

Well, this is all just fucking sad.

We'd feel bad for Junior if he deserved our sympathy.

Anyway, if you had a shitty New Year's, we are confident that these pictures of the Trump family's New Year's Eve has put things in perspective and you are at least grateful you didn't ring in 2018 with these fucks. See? Now you're smiling!

[Most pictures stoled from Trump Jr. and Mar-A-Lago Instagram pages]