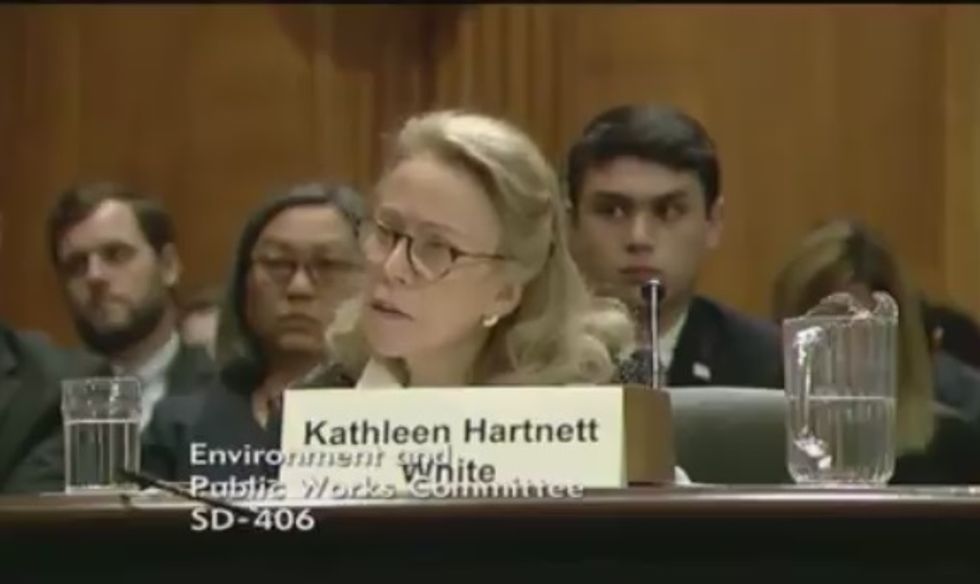 Why would you expect me to know stuff about the environment, Senator?

Let's take a moment to meet Kathleen Hartnett White, Donald Trump's nominee to lead the White House Council on Environmental Quality (CEQ), which advises the president on environmental policy and guides national policy priorities on the environment and climate change. On paper, she might seem to have some qualifications: She's the former head of the Texas Commission on Environmental Quality (TCEQ), that state's equivalent to the EPA, and she heads the Energy and Environment wing of a well-funded think tank, the Texas Public Policy Foundation (TPPF). That's where you start realizing there's a problem: It's Texas, where state agencies don't so much regulate industry as promote it, and where that neutral-sounding "public policy foundation" is funded mostly by the oil industry.

Hartnett White headed TPPF's "Fueling Freedom project," whose mission is to “Explain the forgotten moral case for fossil fuels” and to build "a multi-state coalition to push back against the EPA's unconstitutional efforts to take over the electric power sector by regulating CO2 via the Clean Power Plan.” It worked! Now we have an EPA administrator who's announced he's ending the Clean Power Plan, because coal is good for you.

Hartnett White's actual qualifications for any job involving the environment? She's a cattle rancher and dog breeder with a Princeton bachelor's degree in humanities and religion, plus some graduate work in comparative religion and a year of law school.

But she has the perfect ideological qualifications for a top science advisory job in the Trump administration, as HuffPost summarizes:

She falsely claims that climate science is “highly uncertain,” characterizes it as the “dark side of a kind of paganism, the secular elite’s religion,” and argues that the “climate crusade,” if unchecked, would essentially destroy democracy. That’s right. White believes the United Nations and climate scientists are bent on establishing a “one-world state ruled by planetary managers.”

Awww, worries about "one-world government" -- kind of takes you back, doesn't it? She also suggests regulations on greenhouse gases are part of a conspiracy pushed by communists. Those commies really tick her off, since carbon dioxide is the most wonderful thing in the world, quite literally:

“Carbon dioxide (CO2) is the gas of life on this planet, an essential nutrient for plant growth on which human life depends. How craftily our government has masked these fundamental realities and the environmental benefits of fossil fuels!” Hartnett White said. “Notwithstanding the unscientific declaration of absolute certainty surrounding the politically official science, the climate's sensitivity to the relatively small increment of human-induced CO2 remains the central unsettled question surrounding the climate issue.”

That was in 2015, when the effects of CO2 in global warming were only an "unsettled question" for oil company shills. But boy oh boy, does she love her some carbon dioxide, which she said in a CPAC speech this year is nothing less than the beautiful result -- and giver! -- of life itself:

If Hartnett White is confirmed by the Senate, look forward to hearing Donald Trump parroting this Gas of Life crap. One more example, since it's so deliriously weird: this time some thoughts from a 2016 piece she wrote for The Hill, explaining why renewable energy can never replace fossil fuels:

The truth is that our bodies, blood and bones are built of carbon! Carbon dioxide is a necessary nutrient for plant life, acting as the catalyst for the most essential energy conversion process on planet earth: photosynthesis [...]

How do our national leaders square their public vilification of carbon dioxide with fundamental scientific and economic realities? Such political propaganda has now educated at least two generations of Americans who think carbon is a killer instead of the stuff of life on the earth.

Fossil fuels: They're us.

While working at TPPF, she authored a 2014 "study" titled "Fossil Fuels: The Moral Case," which explained that coal, oil, and gas have made life good, and abandoning them would be the worst thing ever for civilization.

WaPo's Philip Bump offers a cheat sheet on Whitehouse's questions: While the question about how much heat trapped by greenhouse gases is absorbed by the oceans isn't exactly something casual viewers would know, it's probably something the president's top adviser on climate policy ought to be really familiar with. And guess what? Scientists have actually figured that out, and it's not in dispute:

In short, research suggests that as much as 90 percent of the heat trapped by the atmosphere ends up being stored in the Earth’s oceans. That has an expected consequence: Ocean water temperatures are higher now than they used to be.

That's far from a "gotcha" question -- it's a pretty big deal for sea life, fisheries, coral reefs, and so on. Same goes for the 6th-grade science question about whether water expands when it's heated: It does. Hartnett White wouldn't even answer that stumper, which may have some implications for luxury golf resorts in Florida. HuffPo has collected a load of other examples of Hartnett White's jaw-dropping denial of basic climate science, in case you aren't quite convinced yet that she's utterly unqualified to shape science and environmental policy.

In other words, she'll fit right in with the rest of the Trump administration, and unless three Republican senators find the fortitude to say no, that's exactly where she'll end up.