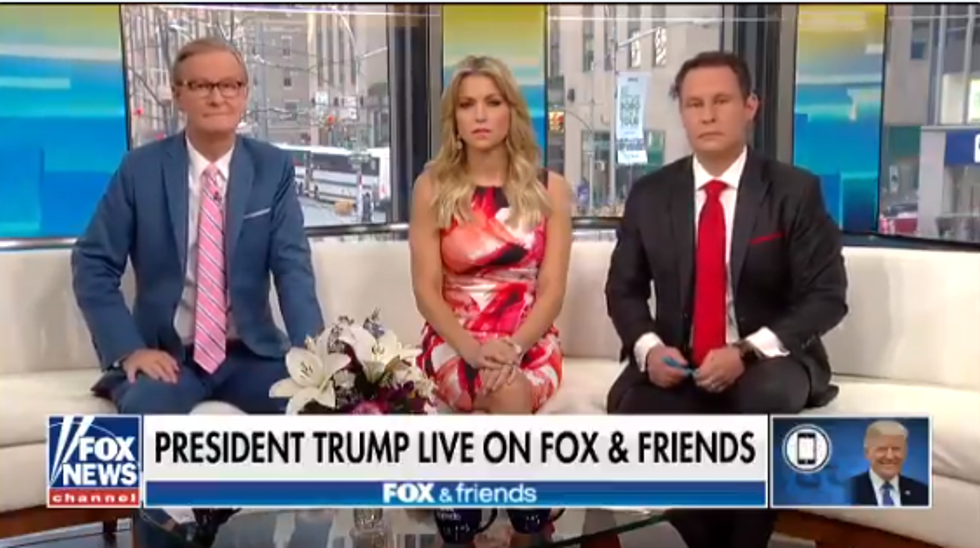 When this is the look on the faces of all the "Fox & Friends" hosts ...

Happy Thursday, shit is on fire!

The president of the United States, who is still Donald Trump somehow, announced Wednesday night via Twitter proclamation that he would be going on "Fox & Friends" this morning, and OH BOY, DID HE!

First, Trump told the idiot couch that he was there because it's Melania's birthday, and all true romantics know that every woman's birthday wish is for her husband go to on "Fox & Friends" and yell at clouds. It is a very traditional birthday gift. (He didn't get her a gift. Says he got her a beautiful card. Probably did not get her a card.)

He also congratulated Melania on what a great job she did with "France."

Remember when George Papadopoulos was just the "coffee boy" on the Trump campaign? Well, let Trump tell you about Michael Cohen, who did a "tiny, tiny little fraction" of his lawyering work, and otherwise is just a businessman, which means their communications are protected by "businessman-dumbfuckingidiot" privilege, right? Trump did admit that Cohen represented him with this "crazy Stormy Daniels deal," which ... is not what he's been saying up to this point! This would be the first time he's admitted that he's even connected to that "crazy" old thing! Remember when Trump was on Air Force One and said he had no idea about the Stormy Daniels thing, and that you'd have to ask Michael Cohen, and then Michael Cohen got raided by the FBI like six seconds later? LOL, that was funny.

Anyway, guess this means Trump really was a party to the payoff! WHAT A SURPRISE.

Of course, while Trump was on "Fox & Friends, Stormy Daniels's lawyer Michael Avenatti was on "Morning Joe," and once he stopped laughing about what was happening on "Fox & Friends" right that second, he immediately entered everything Trump had just said into evidence. Then he started laughing again, while continuing to be really hot, noting that Trump's words were yet another "gift from the heavens" in the case.

Mr. Trump and Mr. Cohen previously represented to the American people that Mr. Cohen acted on his own and Mr. Trump knew nothing about the agreement with my client, the $130k payment, etc. As I predicted, that has now been shown to be completely false. #basta

Trump railed against the "false accusations!" against very fine Percocet dealer Dr. Ronny Jackson, who withdrew this morning as Trump's nominee to run the VA. While wailing about obstructionist Democrats in the Senate, Trump noted that there were many Republican "warriors" in the Senate, and proceeded to list Mark Meadows and Jim Jordan (congressmen), Corey Lewandowski (Hope Hicks's ex-boyfriend) and Diamond & Silk, who are elected senators from the state of Dumbfuckistan. To be fair, Trump's brain did seem to be going off on a tangent about ALL his "warriors," because his brain trails off a lot.

The last clip we will show you is six full minutes of Trump ranting about James Comey, who is a leaker and a liar, because that's just been proven, and Comey leaked classified information (no he didn't). Steve Doocy, to his credit, noted that Comey says he actually didn't leak classified information, but Trump disagreed with that, because Trump knows that anything that makes Trump look bad is automatically classified, according to the Constitution. Trump added that the Comey memos, while being TOTALLY CLASSIFIED, are also "phony," because we always classify FAKE LYING NEWS at the very highest level, it is just the American way.

But don't think the forthcoming clip is all about Comey! PSHAW! Why would Trump's brain stay focused like that? He also said that everybody, even Vladimir Putin, agrees Trump has been rougher on Russia than anybody else, and that "No collusion! there's no collusion between me and the Russians," because even the Democrats agree on that.

Then, we are not kidding, Trump LIED ABOUT THE NIGHT OF THE LONG PEE TAPES AT MOSCOW MISS UNIVERSE AGAIN! WHAT A MORON!

Also, CNN is totally fake and can you believe they gave Hillary Clinton the debate questions? When Trump got off on THAT particular line of dementia-splaining, Brian Kilmeade, apparently having an "Oh shit, why did we invite him here" moment, said, "Yeah, but don't worry about them!" Trump responded by continuing to worry about them for a while.

Trump concluded by noting that he had accomplished more than any president in the history of presidents, because "tax cuts" and "Gorsuch," and also the only collusion was with the Democrats.

We are not fucking around, this all happened in this one clip:

Finally, Trump said Kanye loves him because ... because ... quick, Donald, think of a thing about black people! ... oh that's right, Trump has made all the black unemployment go away! He says that about 72 times a week, so LET'S SAY IT AGAIN!

The "drip drip drip" is coming from the president's BRAIIIIIIIN.