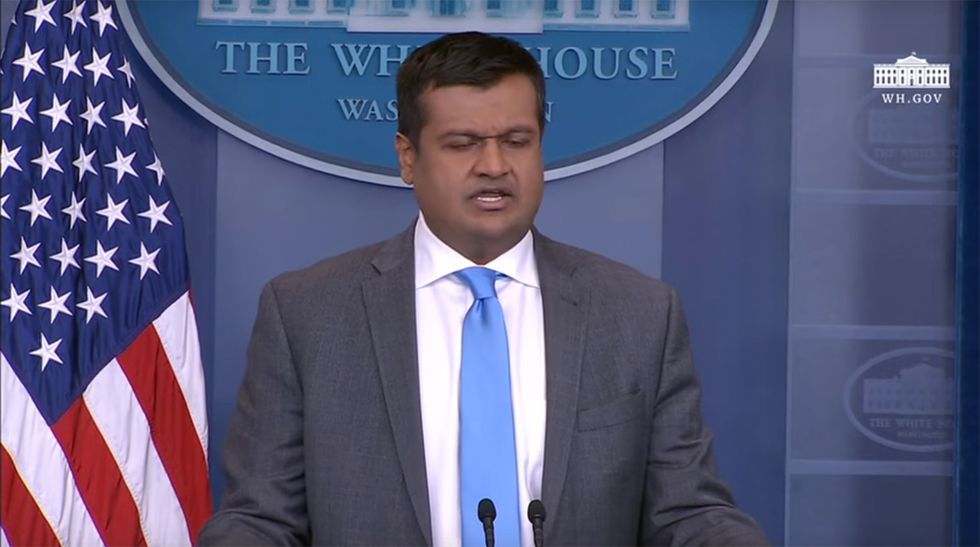 Morning Wonketariat! If you're in the environs of Lexington, Kentucky, please join us tonight from 6 to 8 p.m. at Bru Burger Bar, 3010 Lakecrest Circle! Now here's some of the things we may be talking about today.

More lawyers have noped out of an offer to represent Trump in the Trump-Russia scandal, with one citing his "business conflicts" with Russian and Ukrainian oligarchs. Ted Olson, another fancy pants, also declined to represent Trump, reportedly rolled his eyes to David Corn, and telling Andrea Mitchell that he dumped Trump's offer because his White House is in "turmoil."

Sane and rational minds are worried that the combined power of John Bolton and Mike Pompeo could "unleash" Trump to scream about "radical Islam." What could possibly go wrong?

Here's a solid splainer on how the GOP is rigging the 2020 Census by adding a citizenship question at the request of Jeff Sessions's DOJ, and what that might mean in future elections.

Larry Kudlow has decided to keep all of Gary Cohn's staff at the National Economic Council, and is regularly talking with Cohn since Cohn wasn't a complete fucking idiot.

Stormy Daniels has amended her lawsuit against Trump to add defamation, claiming Trump's sleazebag lawyer is a damn liar.

Trump has been surprisingly silent about his ALLEGED ass-slapping affair with Stormy Daniels because he's "Not in a punch back mode." Take note, people of Earth, Trump gets real quiet when someone threatens his peener.

The RNC's sketchy money honey, Elliott Broidy, has sued the nation of Qatar for snitching on his apparent pay-to-play lobbying scheme with the UAE, claiming someone stole and doctored HIS EMAILS.

Turncoat Democrats are either an ace or an albatross for Republicans facing bitter primary fights on the hard right.

While Democrats look to the rurals this November, Republicans are eyeballing the suburbs in the hope that the people of Pleasantville will swing off their picket fences.

Computer geeks have been working their butts off to get Democrats up and down the ticket to use basic cyber security procedures for their campaigns, but the stubborn olds just don't seem to really understand the threat.

Florida Republican Gov. Rick Scott is planning a "big announcement" on April 9. It's widely expected that #HesRunning to flip a Senate seat from Democrat Bill Nelson, so don't throw out those NRA stats, or your protest signs.

A staffer for Paul Ryan says that Paul Ryan is not quitting, you're quitting! Paul Ryan is definitely running for reelection against Randy "Iron Stache" Bryce, and the Tea Party certainly is not plotting a coup trying to steal the gavel for Steve Scalise.

Patrick Register is hoping to woo young voters in North Carolina's 12th District by using a sexytime dating app. Register told reporters, "[I]t’s probably the greatest thing that I’ve done on this campaign in terms of the volume of people that I can have a personal conversation with. But pants on or off?

A circuit court judge told Missouri Republican Gov. Eric Greitens that he'll have to explain to a jury why he kidnapped his lover and tried to blackmail her with naked photos.

Yesterday's press briefing was a real shit show that started off with White House spox Raj Shah stumbling to explain why anyone should trust anything the Trump administration says.

When asked about the death of Stephon Clark, the unarmed black man who was shot 20 times by police in his grandmother's Sacramento backyard, the White House spokesman stated, "Obviously, the president cares about any individual who would be harmed through no fault of their own." Racism: SOLVED.

Facebook has been running around K Street in a desperate attempt to snatch up lobbyists as the roar for regulation and Zuckerberg's head grows on the Hill.

Trump's White House is now being forced to investigate hundreds of millions of dollars in loans to Jared Kushner after some darn dirty Democrats started sticking their noses into his wallet. [Morning Maddow]

Western countries, including the US and 14 EU member nations, are booting Russian spies diplomats in solidarity with the UK. For its part, the Kremlin expressed a great deal of butthurt and shock as it continues to deny a rash of mysterious murders.

In addition to kicking out 60 Russian diplomats, the US has closed Seattle's Russian consulate over threats of spying on a US nuclear submarine base.