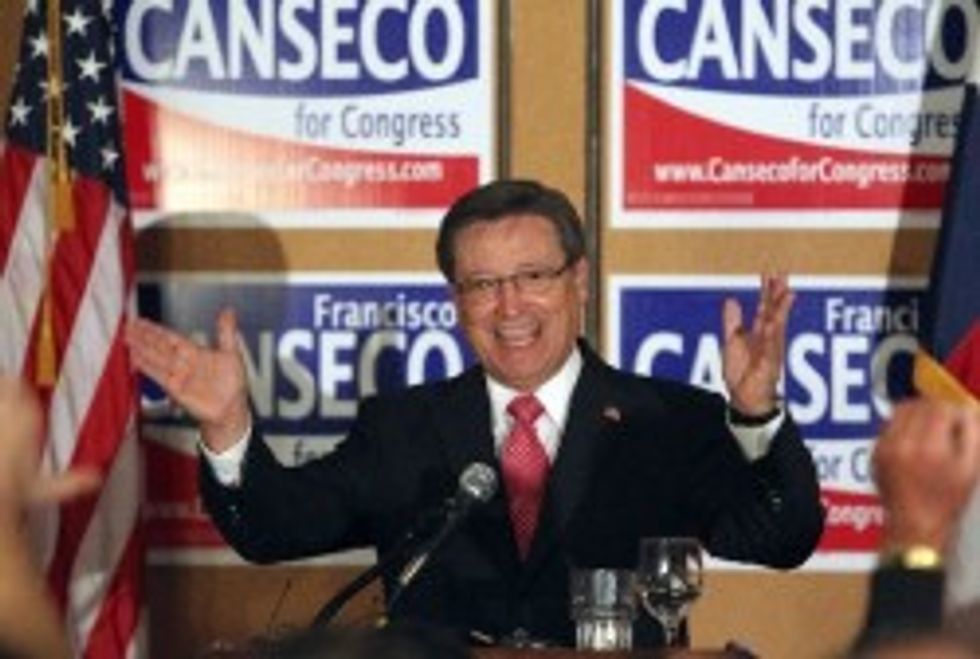 Everyone knows that if you are looking for terrorists, you leave the Mexicans and the babies and the Middle Easterners alone, and you focus instead on theyoung white men with buzzcuts. That is simply common sense, but since the US of A outlawed common sense when it "stopped" racially profiling, we are just all going to have to continue to suffer together. Like this baby, and this Mexican Congressdude! Does he look like a terrorist? No, he looks like Tom Delay!

Rep. Francisco “Quico” Canseco claimed Wednesday that he was singled out – twice – for security scans at the San Antonio airport this month by federal screeners who were “overzealous” in frisking the congressman.

Canseco, R-San Antonio, accused the Transportation Security Administration of assault, which prompted one of the TSA screeners to claim the congressman assaulted him when his hand was brushed away brusquely during a pat down.

The first pat down resulted in an inspector touching him in a manner that made him feel uncomfortable, he said.

OK, so teabagger freshman Texan guy doesn't think he should have to get searched like everybody else, got it, and is PERHAPS a trifle entitled (dunno, weren't there, etc) and MAY have assaulted the TSA agent or the TSA agent might be a total dick. Got it. But what about THE CHILDREN?

The grandmother of a 4-year-old girl who became hysterical during a security screening at a Kansas airport said Wednesday that the child was forced to undergo a pat-down after hugging her, with security agents yelling and calling the crying girl an uncooperative suspect.

The child's grandmother, Lori Croft, told The Associated Press that Brademeyer and her daughter, Isabella, initially passed through security at the Wichita airport without incident. The girl then ran over to briefly hug Croft, who was awaiting a pat-down after tripping the alarm, and that's when TSA agents insisted the girl undergo a physical pat-down.

Isabella had just learned about "stranger danger" at school, her grandmother said, adding that the girl was afraid and unsure about what was going on.

"She started to cry, saying 'No I don't want to,' and when we tried talking to her she ran," Croft said. "They yelled, 'We are going to shut down the airport if you don't grab her.'"

Everything worked out in the end, though!

The incident went on for maybe 10 minutes, until a manager came in and allowed agents to pat the girl down while she was screaming but being held by her mother. The family was then allowed to go to their next gate with a TSA agent following them.

So there we go, everything's fine, four-year-olds can continue to be terrified of "stranger danger" because that is a good and valuable thing to put into their brains, and the TSA can continue to touch them in their bathing suit areas! Congratulations, America! Everyone wins! [Yahoo/Chronicle]