Tucker Carlson Getting A Little More Hitlery All The Time 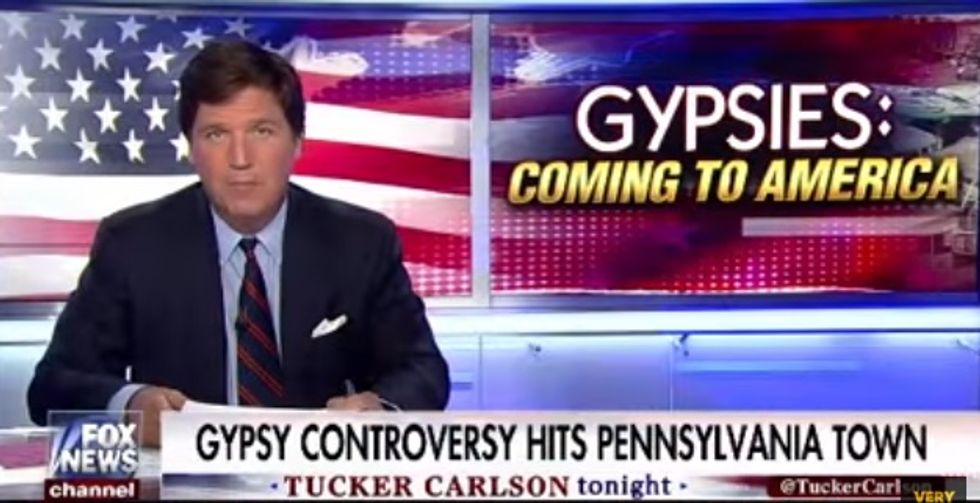 What is to be done with all these pooping Gypsies?

Tucker Carlson has had him a pretty weird few days. Last week on "Constipation Faces With Tucker Carlson," Fox News military analyst Ralph Peters compared Carlson, with his frequent excuses for Vladimir Putin, of sounding like an "America Firster" from the 1930s downplaying the threat of Nazism, because after all, Hitler wasn't threatening the USA back then, now was he?

We won't go too far into that one, because we have pooping foreigns to get to, but after Peters said he couldn't see why any American would want to ally with Russia on anything, since Putin is a killer, Carlson wanted to know what was so wrong with just accepting that "people who are bad people have similar interests," huh? Peters brought out the big rhetorical gun:

Peters: You sound like Charles Lindbergh in 1938 saying, "Hitler hasn't attacked us." Carlson: I beg your pardon. Slow down, colonel, slow down. I'm not in any way -- You cannot compare me to someone who makes apologies for Hitler. And I don't think Putin is comparable to Hitler.
[...] I think it's a grotesque overstatement actually. I think it's insane.
Peters: Fine, you can think it's insane all you want.
Carlson: You just compared me to a Nazi apologist because I asked a simple question. Which is, why does it contravene American interest with a common cause with a group trying to kill ISIS?
Peters: Vladimir Putin has invaded his neighbors, broken the long peace in Europe, he assassinates dissidents and journalists, he bombs women and children on purpose in Syria. He is as bad as Hitler. I'm sorry if you don't like the Charles Lindbergh bit, I will retract that, but let's just say you sound like someone in 1938 saying what has Hitler done to us?

Now, fast-forward to Monday night. While all the real news shows were covering the collapse of the Senate's attempt to repeal Obamacare, Tucker Carlson had a really important story to cover: Forty Romanian asylum seekers, members of the Roma ethnic minority (the folks that got called "Gypsies" before Political Correctness ran amok and you can't use any fun words anymore), are seeking asylum in the U.S. of A., in a small town in Pennsylvania -- it's named California, Pennsylvania, just to drive Siri crazy -- where some residents are freaking out about the scary foreigners and their weird foreign ways. And by golly, some of the residents are up in arms, or at least wish someone would come along and do some revenge murders for them, according to the Pittsburgh Post-Gazette:

Some complained of public defecation by the children and said they had seen the newcomers killing chickens and committing traffic violations. Borough police said they could not confirm most of the alleged nuisance crimes. In borough shops Friday, people were still bringing up the issue, with one man saying, “Where's Charles Bronson when you need him?" a reference to the movie vigilante.

Not surprisingly, the good people of California, Pennsylvania, don't want a bunch of street-poopin' chicken-head-littering foreigners in their town, so the poor residents have become the latest cause celebre of the Wingnuttosphere, because many of the Roma don't yet speak English, and they're weird. Never mind their claims to be victims of political oppression back in Romania -- it's not like Delta Airlines made them give up an aisle seat, is it?

So of course, Tucker Carlson, who is NOT a Nazi apologist, had a whole big segment about the Gypsies. You know WHO ELSE ....

Carlson wonders why a bunch of decent hardworking Americans should have to tolerate a group of outsiders who have invaded their town and seem to have no interest in "assimilating" into American society (after all of two months), and demanded that Roma American filmmaker George Eli explain what the hell is wrong with his people that they would poop all over a small town full of decent godfearing Christians:

Eli, making excuses for the filthy weirdos, attributed the nervousness of the townspeople and the strange ways of the newcomers to "culture shock," but Carlson wasn't having it, because he hears all sorts of stories about Roma people EVERYWHERE just pooping up a storm, even in England.

I have heard a lot of people mention, and I'm just -- I hate to say it, but public defecation, there are a lot of news stories about this from around the world -- I'm serious -- going back a long time in the U.K. and here where groups of Roma settle in a new community and then defecate on playgrounds, or sidewalks, or on their front steps. That seems to me a hostile act. Basically what you're saying -- and these are countries that have indoor plumbing, like, there are options. When you do that, you are saying "We reject you, and your mores." What's that about?

Just like any sneaky minority confronted with the demand to explain why their people are responsible for all the insane rumors and stereotypes about them, Eli -- who admitted the first he'd heard of the rumors about the Roma in California (Pennsylvania) -- tried to pretend his people are not untrained savages. After asserting -- without any evidence! -- that he and his family use proper toilets, he said

I can't respond to something I've never seen as a Roma person. I've never witnessed any of my family do such a thing, and the way you're making it sound, with all due respect, or the way the papers are making it sound, is like they are doing it in protest, if, in fact, it's happening. I know things -- I'm here to talk about -

If you ask us, Eli was giving Carlson entirely too much benefit of the doubt; rumors about filthy foreigns doing filthy things are one of the oldest anti-immigrant stereotypes in the book. Carlson insisted that "there are photographs of it, actually online," but wanted to know just what the hell it was about and why Eli's people DO that? Again, Eli seemed far too willing to accept that it had happened at all, speculating that maybe it had something to do with the Roma folks being from a rural area, as if there are no outhouses or something.

Carlson kept pressing for the straight poop, insisting "I'm interested in the subject," which frankly, may have been the most honest thing he's said in his career. Then he got to the real Problem With Gypsies:

This has been a distinct group for a thousand years that actually hasn't assimilated, for the most part, into the cultures in which it's been hosted, and so I wonder why we think they're going to assimilate in Pennsylvania?

For Chrissake, they've been there for two whole months and they still don't speak English, haven't learned that guns are the most important part of being an American, and their kids probably are quiet and deferential to their parents. Most probably haven't even become Steelers fans, even, the heathens.

For some reason, Eli kept talking to the idiot, explaining that North American Roma are quite successful in North America, all of which went right by Carlson with no effect:

OK, but we can agree that when you come to Pennsylvania, you can't go on the sidewalk or on a playground, right? I mean, why can't -- do you think that we're secure enough with our own mores that we can just say, "Hey, knock it off?"

That's a pretty impressive argument, based on a rumor -- and a picture on the internet!! -- and maybe one little kid who pooped inappropriately. So why won't these Roma clean up their act, huh?

Anyway, Tucker Carlson definitely wants you to know he is no Hitler-apologizin' Charles Lindbergh, and it's entirely coincidental that his next segments will be on the Catholic Church, Jehovah's Witnesses, gays and disabled people: How Are They Being Parasites Today?

Yr Wonkette is supported by reader donations. Please click the "Donate" clicky to send us money and crap.