Tucker Carlson Has Big Sad For Nazi Flakes Not Allowed Into U.K. 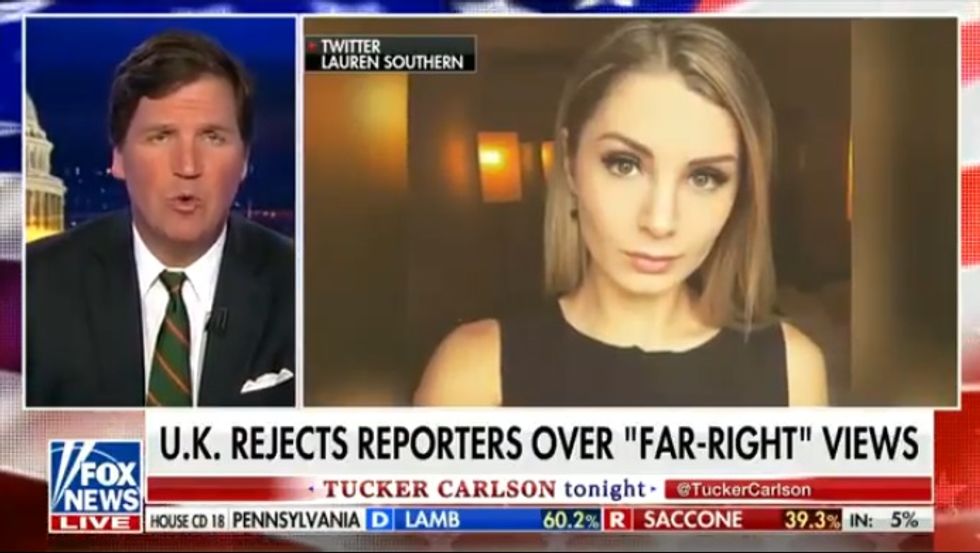 What about the Nazis? Will no one think of the Nazis?

Tucker Carlson sometimes really has to scrape the bottom of his own very filthy barrel to come up with stories for his nightly Moment Of Culture War Outrage. If he can't find an oppressed conservative college student or a story about actual Satanists winning a court case, the poor lad has to pretend that Nazi jerkwads are oppressed Christian folks who are being oppressed simply because they're conservatives. Like he did Wednesday night in this dumb segment about the UK excluding three American far-right activists from England's green and pleasant land. ThinkProgress explainers what happened out here in reality-world:

Noted Twitter troll Brittany Pettibone and her boyfriend, Austrian far-right activist Martin Sellner, were barred from entering the U.K. when they landed at Luton airport on Tuesday. Separately, far-right YouTube personality Lauren Southern was stopped by Border Officials at Calais and barred as well, with authorities saying her presence was “not conducive to the public good.” Immigration authorities removed Pettibone and Sellner based on intelligence that the two were planning to meet with far-right figure Tommy Robinson, and that their visit was designed “to insight [sic] tensions between local communities in the United Kingdom.”

Nice Time! Refugee Rescue Group Comes To Aid Of Sea-Nazis After Their Hitlerboat Breaks Down

Jus' doin' good works for the Lord who loves all the little babies, including these jackass 'identitarian' ones. Also: your OPEN THREAD!

While we do think British authorities should spell gooder, that error isn't enough to throw our sympathies to the poor oppressed white nationalists. The UK doesn't have a First Amendment and they have made it clear that far-right figures aren't welcome, so we're not going to argue that the universal rights of humanity were particularly damaged by these trolls not being given the welcome mat. And just what valuable insights are now being kept from the British people? Welp, Ms. Pettibone is a self-described "leading authority on Pizzagate," so there's a real loss to the marketplace of ideas. And all three of these charming folks were on that Hitlerboat that broke down in the Mediterranean last summer, ending its mission of harassing refugees away from Europe.

Strangely, ol' Tucker didn't mention anything about the poor nationalists' brave efforts to drown some refugees in his segment about the sad Nazi rejects:

American YouTube personality Brittany Pettibone and her Austrian boyfriend were barred from entering the U.K., because they planned to interview Tommy Robinson, an outspoken critic of Islam. Then, on Monday, British police halted a visit by Canadian journalist Lauren Southern, on the grounds she was, quote, ‘a radical Christian,’ and therefore, possibly a terrorist.

How horrifying! Those damn limeys think Christians are terrorists? Why haven't we nuked them, again?

The video then switches to grainy images of ISIS fighters in the Middle East, to illustrate exactly who those stupid Brits ARE allowing into Suet Puddingland:

Meanwhile, radical Muslims, more than 400 former ISIS fighters, are believed to have re-entered Britain without any problem at all. Indeed, they were welcomed. Huhhhhh?

Yes, some 400 foreign fighters may have made their way back to the UK since 2012. No, they were not welcomed with a party and cake. But even if you never watch the videos, we urge you to skip to that "Huhhh?" at the 29-second mark, because while his journamalism is straight out of the more panicky headlines of the Daily Mail, Tucker Carlson does an absolutely convincing recreation of a tropical bird's mating call there.

After that fun intro, Carlson then interviewed rightwing British media dingbat Katie Hopkins about what a great shame it is that Britain is letting the Muslims run riot while oppressing good decent "Christians" like the nice folks who wanted to harass refugee rafts but then ended up breaking down and getting rescued by a refugee aid organization's boat. And if anyone knows how hard it is to be a Christian in today's oppressive UK, it's Hopkins, who got fired from her radio show just for tweeting, after the May 2017 bombing of the Ariana Grande concert in Manchester, that "We need a final solution." She later said it was a typo, then deleted the tweet altogether.

In conclusion, Christians sure have it rough these days, golly. And this is your Open Thread.