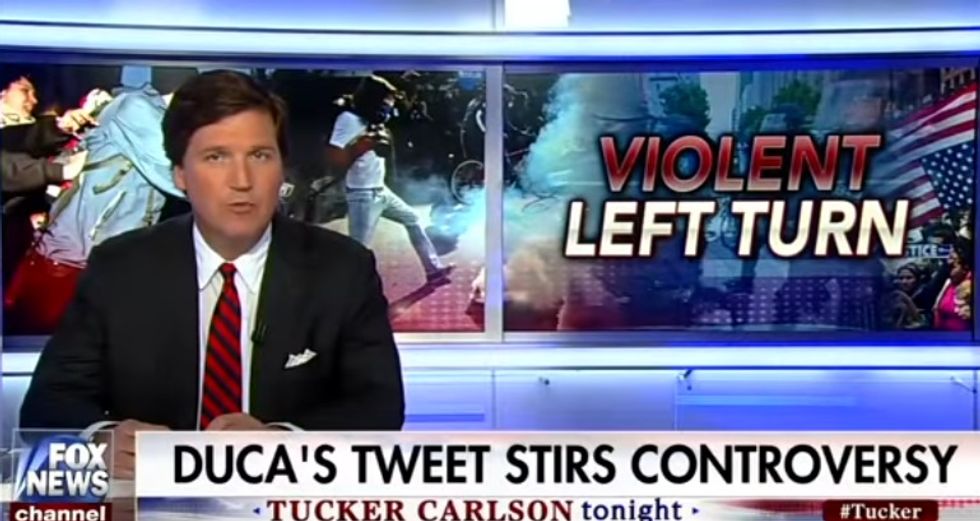 Never one to miss a chance to play Clueless Culture Warrior, Fox News asshat Tucker "No more bowtie jokes, that was years ago" Carlson offered a sort-of apology to Teen Vogue columnist Lauren Duca, who made a complete fool of him -- like, more of a fool -- the last time he tried to make her out as a mean leftist who approved of a guy who angrily confronted Ivanka Trump on an airplane. Never mind that Duca had said the exact opposite.

Well! Carlson had to find a way to pretend he's a decent human being, so, in a brief segment Thursday in which he bemoaned Duca being chosen to give the commencement address at Bard College, he apologized for getting snappy at her back in December. But really, it was all her fault, and did you know that one interview pulled Duca out of obscurity and made her famous? Even though she fantasizes about the deaths of those she disagrees with? Here's Thursday's Tuckersnit:

Carlson is not afraid to apologize for losing his cool, no he is not:

Remember Lauren Duca? She's a writer for Teen Vogue who appeared on this show just before Christmas and delivered a performance so mindless and nasty that I lost control and snapped at her. I shouldn’t have done it, but I did. For that moment alone, though, Duca became a progressive hero. Within a month, she was the subject of a predictably fawning New York Times profile. Last weekend, she gave the commencement address at a university, Bard College in Simon's Rock, Massachusetts.*

Now, we're happy to make people famous, even not very impressive 26-year-old bloggers like Lauren Duca. But you'd think someone on the Bard commencement committee would have actually read what Duca has written before hiring her, maybe looked at her Twitter feed for a minute. It turns out that when she’s not barking on cable television or writing vapid pieces for teen magazines, Duca has yet another hobby: fantasizing about the deaths of her political enemies.

Gosh, how much wrong can you find in that, kids? It's like a verbal version of one of those Highlights for Children puzzle pages with a teacher drawing on the blackboard with a fish and Donald Trump reading a book.

That silly little vapid progressive lady Lauren Duca had already become somewhat famous well before Carlson's bookers invited her to be yelled at (and to end up pwning Carlson on his own set), seeing as how she'd written that badass piece on Donald Trump and gaslighting that everyone was forwarding to everyone else in early December. Carlson, of course, hadn't read the article at all. But sure, Tucker Carlson made her famous all by himself, just like Donald Trump gave NATO the idea to fight terrorism, which they'd only dimly heard of before him. Oh, but what is this about Duca fantasizing about the deaths of her political enemies? Carlson offered a screenshot of this now-deleted tweet by Duca, which he took to mean as a wish for Donald Trump to die in a plane crash:

Carlson, who has apparently never heard the colloquialism "crash and burn" as a synonym for "fail spectacularly," chastised Duca for having "bravely deleted the tweet, but fortunately, the Internet never forgets," and to prove she is a homicidal leftist terrorist, he cited her replying to a critic on Twitter by saying, "I hope this person dies in a fire" -- not a nice sentiment, but also a colloquialism that doesn't indicate any intent to firebomb someone's house. Carlson summed up sorrowfully, "So of course she gave the commencement address at an accredited four-year college. The left has gone insane."

[wonkbar]<a href="http://wonkette.com/591519/donald-trump-cant-believe-people-dont-like-his-straight-talk-on-loser-pows"></a>[/wonkbar]Yes, damn those academic elites for not examining the violence-filled Twitter feed of leftist Lauren Duca, who wants Donald Trump's plane to crash -- just like everyone who literally desires him to die in a flaming Amtrak derailment when they call his presidency a train wreck. Or Yr Wonkette, which clearly meant to imply Donald Trump should die when we used this gif of an airliner test crash to suggest (very naively, in retrospect) that Trump's attack on John McCain would cause his campaign to crash and burn:

For her part, Duca seems a bit less than properly ashamed of herself:

In fact, she persisted, and now has that last screenshot set, for now, as her Twitter header image. The left has gone insane with all this political violence. Somebody'd better punch another reporter.

Oh, and here's Duca's dangerous, leftist, violence-tinged commencement address, in which she calls for death camps for all Republicans, probably:

We are kidding. She just tells "a story about a Fox News Potatohead named Tucker Carlson" starting at the 7-minute mark. Funny, Carlson doesn't mention she made fun of him in her speech, which was online well before he called her a wannabe assassin. Funny, that. (Also at 8:12: "There is literally a spider on the microphone. Oh my God!" Fine, she can call for the deaths of her enemies, but she's ascared of spiders?)

* He meant Bard College at Simon's Rock, which usually goes by "Simon's Rock" to distinguish it from its parent school, Bard College in Annandale-on-Hudson, New York. The More You Know!

Yr Wonkette is supported by reader donations and probably gun-running. You can help with one of those by clicking the "Donate" clicky below!