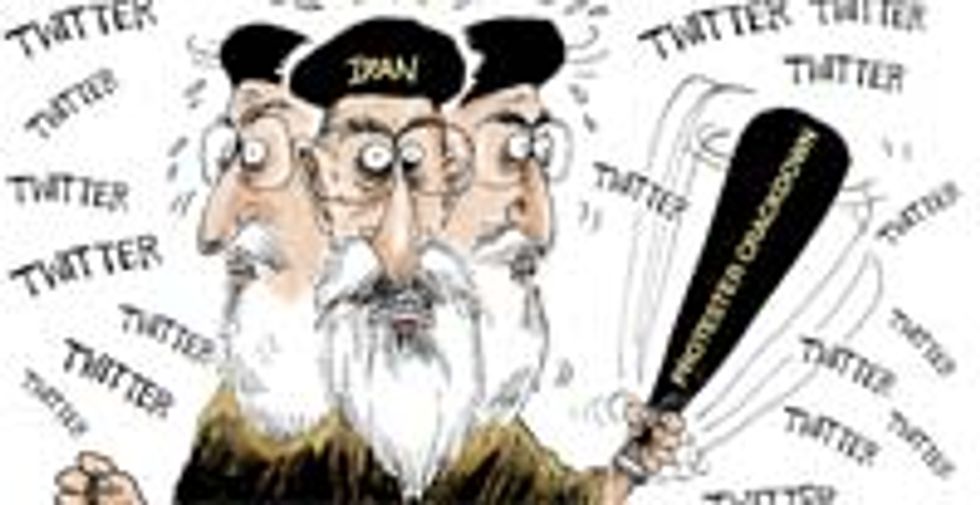 By the Comics Curmudgeon
Look, kids, your Comics Curmudgeon loves freedom, and loves peaceful revolutions, and would dearly love to see something good happen in Iran -- something other than hopeful young college students beaten to death by thugs with sticks, or, maybe worse, things just staying the same. Your Comics Curmudgeon also enjoys the Twitter, because it offers the opportunity to plug my various stupid projects and share ludicrous spam subject lines I receive. But here's the thing: I do not believe these two things go together. That is why I have not made my Twitter green, or changed my "Twitter time" to Tehran time, or anything like that, because Twitter will not liberate anybody. In fact there is only one thing less helpful to freedom-seeking Iranians than Twitter, and that is political cartoons about Twitter.

Hey, did you know that Iran's Supreme Leader Ali Khameni, in addition to having pretty much the most awesome job title in all of existence, is a comical old person? It's true! He's 69 years old and wears dippy, unfashionable glasses and does not understand the technology, at all. He probably had to have one of the younger guys on the Guardian Council set up his AOL account, ha ha! So, obviously, he can't understand the Twitter, and its promise of unlimited Freedom, prefixed by the @ symbol for some reason. ("Why do they use the @ symbol?" he asks on that one tech-savvy Guardian Council dude on the phone. "Didn't you tell me that that goes in the middle of an e-mail address? Why do they use it for more than one thing?") Thus, he can only stare, befuddled, at his tiny, Twittering people, milling about in their Tyranny Cage.

As is the case whenever old people encounter technology, Khameni's bafflement quickly turns to irritation, and then to rage. And, like dictators everywhere, his first impulse when confronted with something irritating and rage-inducing is to beat it to death with a clumsily metaphorical club. Ha ha, Mr. Ayatollah Man! You cannot bludgeon a Twitter! Believe me, if you could, someone would have done it YEARS AGO.

(Side question: Since fundamentalist Muslims are above all else VERY STRICT MONOTHEISTS, does depicting Khameni with three faces arranged very much like the depiction of a pagan Hindu deity represent a terrible affront that can only be resolved by an angry demonstration that burns down a KFC in Pakistan? Discuss.)

Just as you cannot bludgeon a Twitter, you also cannot arrest it, because it is an abstract concept, like Freedom, but with fewer characters (your fancy Freedom cannot be expressed in text message form). Nevertheless, this industrious representative of the Iranian Ministry of Information Order and Control (note: does not actually exist) is doing his darnedest to capture an elusive Twitter! I admit to being charmed by his barely visible word balloon, in which he announces with a near-silent "grunt" that he took what he thought would be a cushy desk job with the Ministry of IOC because he was getting on in years, and surely there's some Basij thugs who could be doing this? But, sure, the Supreme Leader wants me to arrest a fucking Twitter, whatever.

Oh, hey, look, it's what's his name, President Ahmewhosit, the guy that everyone in America LOVED TO BE SO ANGRY ABOUT until this whole shitshow started and we had to learn about how the country was actually run and it turns out the President isn't really in charge of much, and there are like three different "councils" with confusing names that can all veto each other, and maybe dude is kind of a front for someone else? Anyway, here he's being compared to Alfred E. Newman -- because he's a grinning dummy, you see! Ha ha! He's also wearing a button that says "Let's Disco," which makes no sense, absolutely no sense whatsoever, but you know what, it's not another God-damn joke about God-damn Twitter, so let's just laugh at it uproariously and move on with our lives.

Say, remember when the Chinese protested for their freedom, in Tiananmen Square, and they built a big statue like the Statue of Liberty? There are lots of similarities between then and now, with the protesters and the freedom! Of course, the Chinese kids didn't have Twitter. And Muslims tend to be uncomfortable with representational art, especially representational art of ladies showing a lot of sexy shoulder. And there really isn't any such place as "Tehranimen Square," but I can see how you'd be unable to resist that delicious pun! So let's just bask in the glory of this inspirational comparison between the two events, and try hard not to think about the last bit, with the tanks. (KEN PLEASE TAKE OUT THE THING ABOUT THE TANKS IF IT TURNS OUT TO BE TERRIBLY DEPRESSING BY NOON FRIDAY, OK? THANKS!)