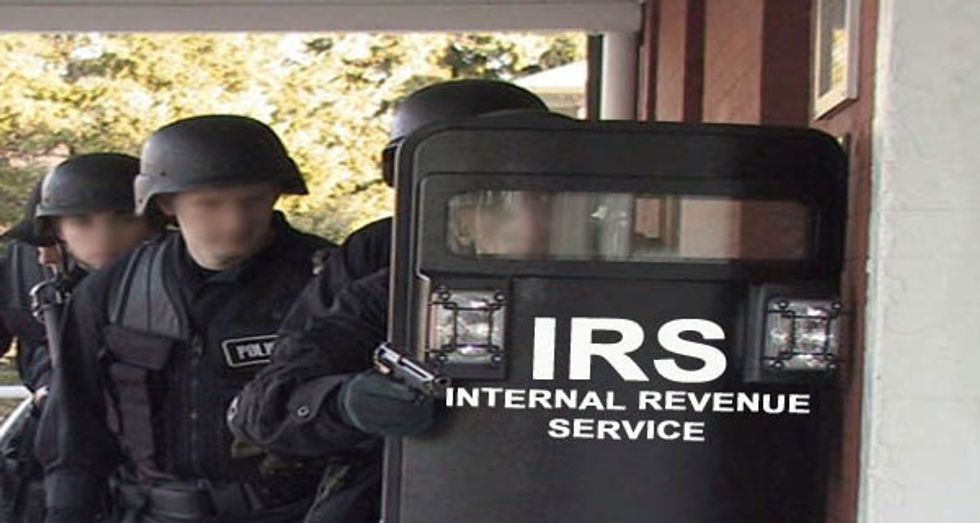 Oh dear. Moar tyranny! Breitbart News isgetting audited by the IRS, which can only mean one thing: The company is yet another victim of Barack Obama's relentless vendetta against conservatives. Look, Barry, wasn't personally ordering Andrew Breitbart's murder (by "clogged arteries," the preferred assassination technique of the health food nut in chief) enough for you? Now you have to send your IRS goons after the most respected media group in America?

Breitbart News is pretty sure it was targeted for an audit as an act of political persecution, because after all, isn't everything any government agency ever does the result of political payback? It's certainly how Breitbart News would run the country. Breitbart News Network executive chairman Stephen K. Bannon issued a statement saying Nice Try, but you Don't Scare Us:

The Obama administration's timing on this is exquisite, but try as they might through various methods to silence us, we will only get more emboldened.

That's definitely a bold position to take, all right. Chickens will be fucked.

Oh, also, even Fox's report on the story notes:

it remains unclear whether the apparent audit of Breitbart News is anything out of the ordinary. The IRS conducts audits of tens of thousands of businesses every year.

How many? Roughly 33,000 business audits annually, as well as 1.48 million individual audits. That's a LOT of targeting, although everyone knows that the other audits are just a cover, so that the IRS can plausibly deny that it's out to get conservatives. They're really good at this.

As you might expect, the IRS isn't owning up to this crime either:

The agency said in a statement: "Federal privacy laws prohibit the IRS from commenting on specific taxpayer situations. The IRS stresses that audits are based on the information related to tax returns and the underlying tax law -- nothing else. Audits are handled by career, non-partisan civil servants, and the IRS has safeguards in place to protect the exam process."

But surely there must be some evidence of a vendetta against Breitbart? Sen. Ted Cruz wants some answers, that's for sure. He wrote a very strongly worded letter to IRS commissioner John Koskinen, demanding an explanation and pointing out that when you consider that Senate Democrats also want to abort corporate personhood, things are pretty dicey for Free Speech these days:

This media audit, coupled with the recent proposal of 49 Senate Democrats to amend the Constitution to give Congress plenary power to regulate political speech, paints a disturbing picture of a coordinated assault on the First Amendment.

Cruz admits that, in "another time, under another Administration," an audit of a corporation might not be any big deal, but considering the indisputable fact that conservatives are convinced the IRS is hunting down conservatives just like in "The Most Dangerous Game," it only stands to reason that this is just one more attempt to destroy freedom.

If the Obama administration really cared about free speech, it would announce a permanent moratorium on all audits of any conservative-leaning individuals or organizations. Or maybe Breitbart could just consider the argument of Law-n-Order types everywhere: If you haven't done anything wrong, what are you worried about?