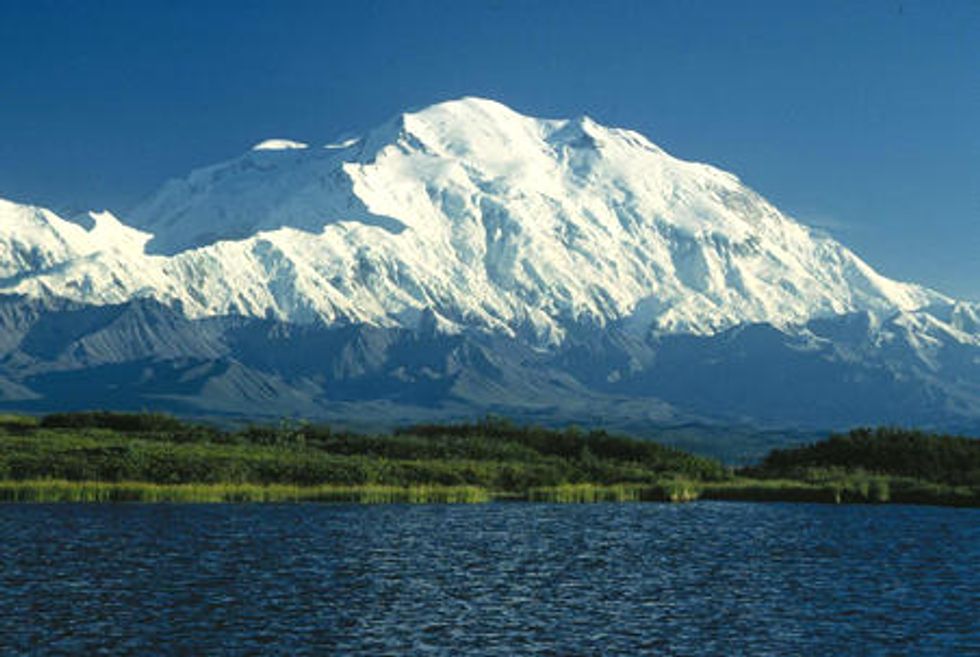 Surprised he didn't rename it Hope The Terrorists Win Mountain.

Emperor Obama has issued another fatwa, and this time it is about how it's no longer okay for North America's highest peak, which is located in Alaska, to be named after President William McKinley, but rather, it should be given a funny foreign Alaskan name, "Denali." This is obvious government overreach, as all mountains got their names directly from Jesus, when they were formed, and He wanted this one to be named after a U.S. president. You have questions, we have answers.

Why is the tyrant president doing this???

Okay, so fun fact. The mountain was named "Mt. McKinley" in 1896 by a prospector, and the U.S. American government officially recognized the name in 1917. But, studies show that the mountain actually existed before 1896! And native Alaskans (the real kind, not the Palin kind) had called it Denali for YEARS, long before they were forced to call it some white guy's name. In fact, they used that name both for the 20,237-foot summit of the mountain (according to Alaska the 20,320 number is wrong), and also for the mountain's slightly shorter BFF, which is currently called Mt. Foraker. Alaska formally removed the white American president's name from the mountain in 1975, but the federal government (read: FUCKING CONGRESS) wouldn't change it, because they didn't want to make Ohio cry.

Who mad about it?

Ohio Republicans. Yes, you see, McKinley was from Ohio (and so was Sen. "Foraker," so COMIN' FOR YOU NEXT, probably), and, though most Ohioans will never visit Alaska, and many couldn't pick it out on a map, it apparently is very important to them for this one mountain to be named after a president. They could, of course, name something in Ohio after McKinley -- like maybe that giant Touchdown Jesus statue they have -- but boo hoo and waaaaaaaah, that's not good enough. They have to have their special mountain in Alaska, just like very other state .

"There is a reason President McKinley's name has served atop the highest peak in North America for more than 100 years, and that is because it is a testament to his great legacy," Speaker John Boehner (R-Ohio) said in a statement issued Sunday night.

"I'm deeply disappointed in this decision," Boehner said after noting that McKinley served in the Army during the Civil War before representing Ohio in Congress and as governor.

Portman added that he really hopes Obama will work with him to find another thing in that national park, IN ALASKA, to name after McKinley. Or maybe they could find something IN OHIO? Just a thought. Like this thing, in Dublin, Ohio, where there is an artistic installation consisting of "109 cement corncobs." Couldn't they call it the President McKinley Cement Corncobs? That would be very nice, and in Ohio!

Did "presidential candidate" and certified Ohio person Gov. John Kasich say a thing? Of course he did. Here, have a tweet:

He included a clip from a news story about McKinley's assassination, with an explanation of why the carnation is McKinley's "lucky flower," but we didn't print that part because we obviously hate carnations and President McKinley probably.

Another Ohio Republican, Rep. Bob Gibbs, is real mad too, saying "unilaterally" blah blah, "constitutional overreach" fart fart, "job-killing war on energy" whine whine, "insulting to all Ohioans." If you're dying to read his full statement, go ahead and click we guess.

POLITICO includes Karl Rove as a person very upset about this, but honestly, it sounds more like Rove just wants people to read his new book about McKinley:

“The 25th president gets overlooked too much already. Would hope the president would find another appropriate way to honor McKinley. Luckily there’s a book coming out about McKinley in November," Rove wrote in an email to POLITICO Playbook.

Okay, we'll put that on our GoodReads list, WE PROMISE.

Seriously? This is a thing?

You're not an Ohio Republican, which means you are not A Idiot, so you wouldn't understand.

Now, just to be fair to our Republican friends, we should be clear that it's specifically Ohio Republican assholes mad about this. Here's Alaska Sen. Lisa Murkowski, a Republican, saying thank you, Obama, for Doing A Nice:

For centuries, Alaskans have known this majestic mountain as the ‘Great One.’ Today we are honored to be able to officially recognize the mountain as Denali. I’d like to thank the President for working with us to achieve this significant change to show honor, respect, and gratitude to the Athabascan people of Alaska.

Gosh, it's like the president didn't do this JUST to spite people.

This is probably just the beginning, isn't it?

Almost certainly. Obama thinks all our Americas are belong to him, so we can expect many other beloved landmarks and red states to get new names before the president leaves office (IF HE EVEN LEAVES).