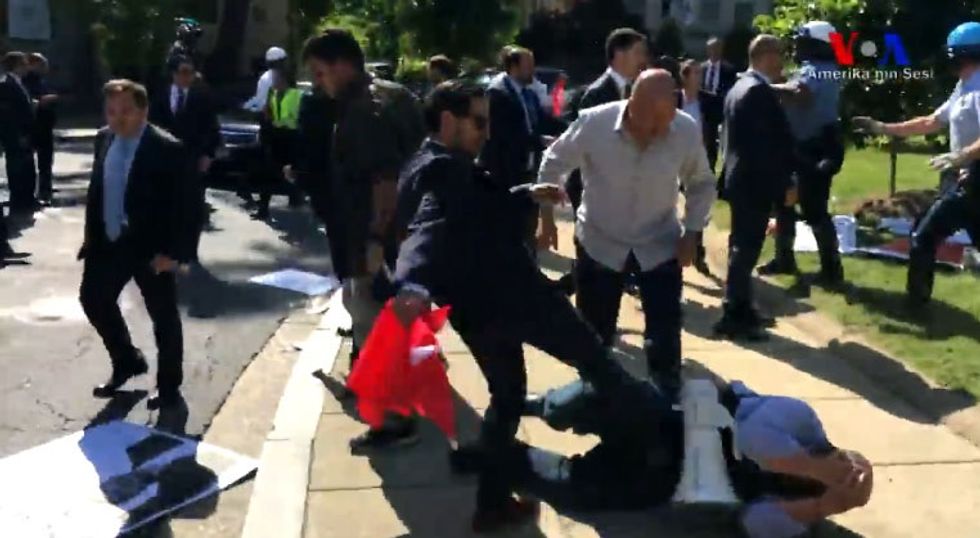 In the good old days, they'd be taken out on a stretcher.

Finally some justicey follow-up to that horrible episode in May where thugs from the Turkish embassy beat the crap out of Americans, in America -- seemingly, at his personal direction -- for the crime of protesting Turkish president Recep Tayyip Erdogan. District of Columbia authorities will announce criminal charges today against 12 members of Erdogan's security team, according to American officials. Several others have already been charged in the assaults. The charges will be announced at a news conference scheduled for this morning by DC's mayor and police chief.

There's one small complication: While arrest warrants have been issued, the suspects are all back in Turkey, since that's where their boss is.

Police and other officials say various members of Erdogan’s visiting security team, some of them armed, attacked a group protesting his regime as police struggled to restore order. Bystanders recorded the confrontation with cellphones.

The attacks were carried out at the apparent direction of Erdogan, who sat in the back of his Mercedes and told an aide to go have the goons bust some heads.

It seems Erdogan (inside the car) ordered his security detail to beat up protesters in Washington D.C. (v @voanews) pic.twitter.com/8dIli00xNV

DC police had already arrested and charged two people after the public beatdown, and said Wednesday that two other Americans, one from Virginia and one from New Jersey, will be charged in connection with the assault.

Turkish officials claim that while security officers did participate in the brawl, they were simply defending themselves, as one does, by kicking people on the sidewalk and choking a woman until blood vessels in her eyes burst. Besides, said Turkey, there were terrorist sympathizers among the protesters, which means anyone who opposes Erdogan.

In what may be the sad understatement of the day, the Washington Post notes,

Law enforcement and legal experts have said bringing the attackers to justice could be difficult because Turkey is unlikely to extradite suspects or make them available for interviews.

Wow, Turkey Is Being An *Unbelievable* Dick

Why didn't the US suspend all protest for the Turkish president, like Saudi Arabia did for Trump???

Is there a foreign dictator Trump DOESN'T love?

Turkey has been all kinds of dickish about this, since Erdogan knows Donald Trump just loves him some strongmen, and went out of his way to congratulate Erdogan on winning the right to be even more of an autocrat. After he got back to Turkey in May, Erdogan's government summoned the American ambassador to yell at him for making his security goons scuff their shoes on protesters' skulls, and the New York Times says the brawl appears to have gotten in the way of a deal to sell American small arms to Turkish security forces. We'd better apologize or they might not buy our guns.

Unfortunately, the U.S. also needs to keep its lips at least in the general vicinity of Erdogan's ass, since Turkey is part of the coalition fighting ISIS, and we have a huge airbase there that would be damned inconvenient to be kicked out of. Maybe Donald Trump can smooth Erdogan's temper by asking him for tips on passing healthcare legislation in complete secrecy. That would surely flatter the dictator and help make America a little more like Turkey.

Yr Wonkette is supported by reader donations. Please click the "Donate" linky to send us money.