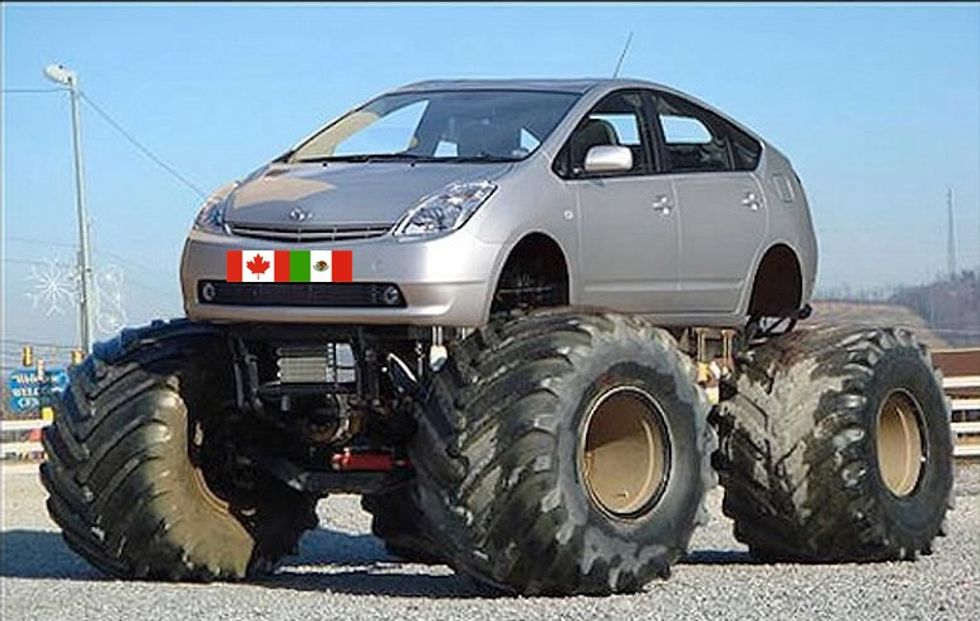 This post sponsored by a grant from the Patty Dumpling Endowed Chair for coverage of oil spills, the fossil fuel industry, and climate change. If you see Patty Dumpling, tell him it's time to re-up the sponsorship. Sure would hate for something to happen to that brass plaque in the Sekrit Chatcave...

The leaders of Canada, Mexico, and the United States are holding a sexxy summit at sexxy Justin Trudeau's house this week. When they weren't making S'mores and taking turns holding a flashlight under their chins while telling scary stories about Donald Trump, they plotted together to form the NORTH AMERICAN UNION and finally build that NAFTA SUPERHIGHWAY. Or not. Also, these meetings held by Barack Obama, Justin Trudeau, and Enrique Pena Nieto are apparently being called the "Three Amigos Summit," which we think deserves a lot more mockery on its own merit. But that is beside the point.

cut greenhouse gas emissions from the oil and gas sector, boost the development of clean power and build new cross-border transmission lines as part of a clean energy plan[.]

It's called the "North American Climate, Clean Energy and Environment Partnership," and it sounds a hell of a lot like international cooperation, which is always a threat to American Sovereignty, and frankly we're astonished we haven't yet heard any conspiracy wankers bitching about how Mexico and Canada are plotting to steal all our precious carbon emissions and force us to ride bicycles, or worse, drive Prii. So what internationalist regulatory horrors are in store? The climate action plan committed the three nations to a goal of generating half of North America's electricity using clean technologies by 2025, which would include "nuclear, hydro, other renewables and carbon capture and storage projects." That last is a bit of diplomatic hedging to allow for continued use of fossil-fuel energy technology: If you generate electricity using natural gas but capture and sequester the CO2, that counts as clean.

A White House official said that in 2015, total clean energy in North America was already roughly 37 percent, so while it's going to take some doing, the goal doesn't seem altogether unrealistic, except when you consider the extra emissions that will be generated by James Inhofe's head catching on fire. Oh, and here's the part that should make wingnuts burst into flames as well:

The clean energy push includes the development of cross-border electrical transmission projects to boost capacity for trading of clean energy and for reliability and flexibility of the continent’s energy grid, the leaders said.

The smart grid and its international electricity monitoring is coming for you! Buy gold, survival seeds, and some ripoff solar panel plans now so you can live off that grid! Oh, and more guns. You'll need those no matter what. How do we know that Mexico won't be sending rapist electrons and murderer electrons along the international power lines? We have to control the electricity for our country, or we won't have a country. America!

We were disappointed to see that Conspiracies-R-Us clearinghouse WND isn't even mentioning the Three Amigos Summit, nor its plethora of internationalist piñatas. Instead, WND Wednesday was busy freaking out about radical jihadis, Benghazi, and mysterious UN trucks seen being trucked on the freeways of Virginia:

And yes, the WND commenters are all certain "Marshall Law" is right around the corner.

But no paranoia about this trinational plot to close down all the coal mines, ban air conditioning, mandate patchouli distribution to schoolchildren, and house illegal immigrant polar bears in YOUR CHURCH? Guys, if a leftish mommyblog, recipe hub, and MLP fanfic registry has to make that shit up before you do, you are sleeping on the job. Thank goodness InfoWars is warning that Mexican President Nieto is "demanding" a merger of the three nations in, you guessed it, an "EU-style 'North American Union.'" And no, he didn't actually say that.

Still, if you want proof that Canada is in the tank for Barack Hussein Obama and his nefarious plans to crush freedom under the iron heel of International Cooperation, look no further than this chilling video of the reaction to Obama addressing a joint session of Canada's Parliament -- the first U.S. President to do so since Bill Clinton*:

That's right. Canadian legislators chanting "Four more years!" for an American president. Can there be any clearer proof Obama's Cana-Mexican henchmen will soon be pouring across both borders to help him impose Marshall Law?

*Update/Correction: Serves us right for listening to offhand remarks on MSNBC. As several alert commenters point out, Bill Clinton in 1995 was the last U.S. President to address a joint meeting of the Canadian Parliament, not that Reagan fellow. Wonkette regrets the error. Next you'll be telling us Moose Jaw isn't in Tennessee.