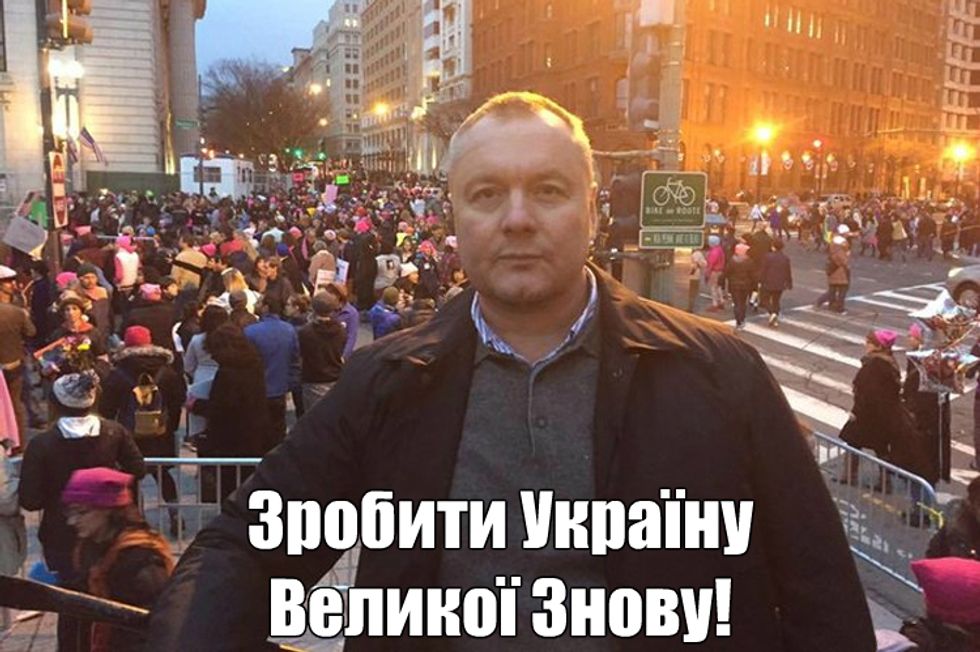 So there's been a development in that wacky story about how Donald Trump's lawyer teamed up with a mobbed-up Russian emigre and a Ukrainian member of Parliament to promote an unofficial "peace plan" for Russia and Ukraine, which Trump's lawyer, Michael Cohen, may or may not have hand-delivered to former national security adviser Michael Flynn's office before Flynn was shitcanned (depending on which version of the story Cohen's told). Turns out somebody might be in big trouble for doing freelance diplomacy without government authorization! Problem is, it's the Ukrainian guy, Andrii V. Artemenko, a member of the pro-Russian opposition party in Ukraine's parliament, who's being investigated on possible treason charges by Ukrainian prosecutors. Too bad, so sad!

The New York Times reports Artemenko was accused in court papers Tuesday of joining Russia in a conspiracy to commit "subversive acts against Ukraine" with his plan to "legitimize the temporary occupation” of Crimea by Russia in 2014. Artemenko's brilliant idea would allow Russia to occupy Crimea for either 50 or 100 years if Ukrainians voted to "lease" the occupied territory to the Russians. Which is not generally how peace proposals work, but Artemenko likes to think outside the box, we guess.

Yuriy Lutsenko, Ukraine’s prosecutor general, posted a copy of the court filing to his Facebook page on Tuesday with the statement “Ukraine’s integrity is above all else.”

Artemenko traveled to the U.S. in January to share his innovative plan with Felix H. Sater, a sleazy mob felon and former advisor to the Trump Organization who Donald Trump now says he barely ever knew (although Sater arranged substantial real estate deals Trump was involved with), and with Cohen, who apparently went along because he loves the idea of Peace In Our Time. Cohen told the Times he'd delivered the plan in a sealed envelope to Mike Flynn's office, then told the Washington Post he'd done no such thing, and insisted the Times story was "fake news." Since Sunday, incidentally, Cohen has told at least two other different variations on the story to other media outlets. Given such polyamorous relationships with reality, we can see why Cohen and Trump get along so well.

Artemenko, who would very much like to be Ukraine's very own Donald Trump and is affiliated with a pro-Russian party that was in part organized by former Trump campaign manager Paul Manafort, hasn't been arrested or formally charged with anything (yet); he insisted to a Ukrainian news outlet that the investigation is "politically motivated."

“I’m not going anywhere, and will meet with investigators to explain my position,” he was quoted as saying.

He claims his awesome proposal is backed by Russia, but the Kremlin has denied it knows anything about it. He also says he has proof of corruption that could bring down Ukrainian president Petro O. Poroshenko. For all we know, maybe he says Poroshenko had a private email server. In any case, Artemenko's "peace plan" hasn't turned out to be a feather in his cap like he hoped, but instead is a big black eye:

Word of Mr. Artemenko’s peace plan has prompted outrage among many officials in Ukraine. Some accused him of being a secret Russian agent, and there have been calls for him to relinquish his seat in Parliament. On Monday, fellow Radical Party lawmakers voted unanimously to expel him from the party.

The suggestion that Crimea be handed over to Russia legally, even for a limited time, particularly outraged Crimean Tatars, the ethnic group in Ukraine whose members consider the peninsula their historic homeland.

A Tatar member of Parliament, Refat Chubarov, even wrote a Facebook post calling for Artemenko to lose his parliamentary immunity and be prosecuted for treason:

“Given the continued Russian occupation of Crimea,” he wrote, “which is characterized by the total suppression of the rights and freedoms of the Crimea Tatar people; violent kidnappings and killings of peaceful citizens; arrests of Crimean Tatar citizens and attacks on their homes and families; as well as the persecution of journalists, the actions of Andrii Artemenko are unequivocally qualified as treason.”

Guess some countries just aren't as open to peaceful cooperation with Russia as Donald Trump is. Sad!

Wonkette is ad-free and supported only by Readers Like You. Please don't let us die on the streets, we would really hate that.