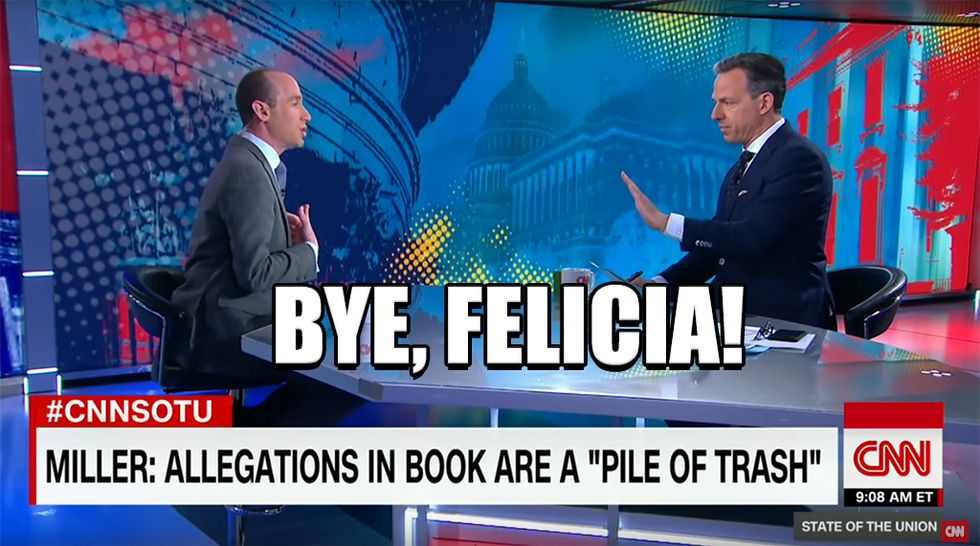 Trump's lawyers are nervously chewing their pencils as they try to figure out how Robert Mueller would interview Trump, if it actually happens. (It's definitely not going to happen.)

Robert Mueller had ANOTHER chat with the Russian lawyer lady who tried to give DJTJ "dirt" on Hillary Clinton after finding out about a couple of other people she talked to that day in Trump Tower.

There was a fire at Trump Tower in New York this morning. Normally, you go outside to burn shredded documents.

During an interview with Trump's mini-Mussolini, Stephen Miller, Jake Tapper got fed up with all of Miller's bullshit and cut his mic. Like a good little Trumper, Miller threw a temper tantrum and refused to leave the set, and was escorted out by security. [Video]

Oprah accepted the Cecil B. DeMille Award at the Golden Globes and gave an inspiring speech in support of women and the #MeToo movement, prompting everyone to run to Twitter and say #ShesRunning. [Video]

Trump is delaying his "Fake News Awards" to Jan. 17, but nobody knows what they actually are beyond more Trumpian Twitter nonsense.

Republicans who attended the Siberian slumber party at Camp David this weekend agreed to "sell 2017" accomplishments and blame Democrats for their own inability to achieve anything beyond screwing poor people.

Even though Congress is expected to kick the can down the road (AGAIN), Dreamers are the cornerstone of all the budget talks as Democrats draw a line in the desert sand.

Steve Bannon is super sorry for talking all that shit about Trump's kids, so he pulled his cock out of his mouth to kiss Trump's ass.

Trump spends most of his mornings sitting in bed shoving his face full of fast food, firing off mean tweets while watching teevee and chit-chatting on the phone, a scheduling detail known as "Executive Time," that has him avoiding executives duties until 11 a.m.

The SEC is investigating Jared Kushner's business after reports began to surface that Kushner Companies would give Not Americans EB-5 visas for $500,000. [Archive

Pfizer is bailing out of researching drugs for Alzheimer's and Parkinson's disease and laying off 300 people, after it was deemed no longer cost-effective. Remember, Pfizer just got a $38.8 billion Trump/Ryan tax cut and bought back $16.4 billion of its own stock. [Archive]

Republicans are calling bullshit on data showing federal workers are paid less than the private sector, and they're considering a pay freeze on top of cutting retirement and health-care benefits.

The Trump administration is expected to announce a plan to use diplomats and military attaches as overseas arms dealers in an effort to make American weapons manufacturers rich as fuck again.

An Air Force commander was "You're Fired" for being an "egocentric" asshole who bummed everybody out, harassed a transgender airman, and shoved Biblical bullshit down everyone's throats.

A suspected white supremacist has been arrested on terrorism charges after he tried to derail an Amtrak train in Nebraska.

One of the women who accused ALLEGED pedophile Roy Moore of playing grab ass with her had her house mysteriously burn down, so a bunch of tech guys raised $160,000 for her.

There's a school shooting simulator being marketed towards law enforcement officials and teachers to train them on how to handle a school shooting. Yes, there's an option to play as the shooter.

We're 100% ad-free and reader supported because people like you GIVE US MONEY!