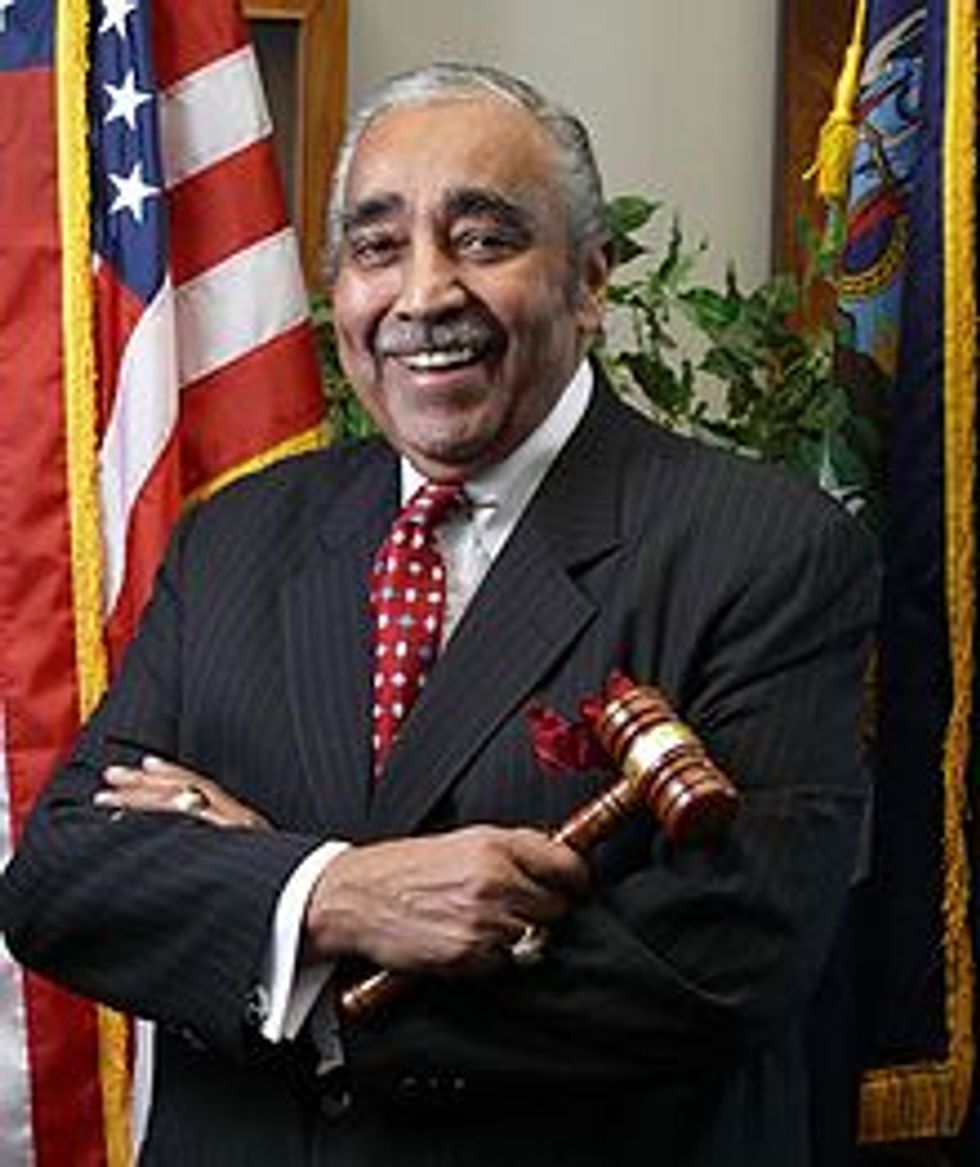 New York Congressman Charlie Rangelloooves Barack Obama — puts him on mailers. Brags about that health care deedly-doo the two of them passed. Declares, proudly, that "Rangel’s got Obama’s back!”

Now that he's facing a primary challenge today, though, Rangel (D-Jurassic) is hurt — Obama, you see, just won't endorse the guy for Congress. Obama! His old pal! The guy Rangel is so close with that he endorsed Hillary Clinton to beat him in 2008!

It's a simple gesture, really — all Obama has to do is release a statement, for goodness' sake. No photo op, no public appearance. Just one little email from a campaign that sends so, so many emails. No dice.

Why? WHY?! It's almost like Obama is bothered by Rangel being one of only six congressmen to be censured by Congress since 1890. How preposterous!

OK, New York Times, let's say, hypothetically, that being convicted of 11 ethics violations would actually bother the president of the United States. What was Rangel accused of?

He was accused of failing to declare hundreds of thousands of dollars of personal assets on his financial disclosure forms, failing to pay state and federal taxes on rental income on his villa in the Dominican Republic and helping to preserve a tax loophole worth hundreds of millions of dollars for an oil company at the same time that he was seeking a $1 million contribution to the Rangel Center from a company executive.

Oh. Um... Well, he had to have had a good explanation, right?

Since the accusations were first raised two years ago, Mr. Rangel has acknowledged bookkeeping errors in his financial disclosure forms and has said that his failure to pay more than $60,000 in taxes on rental income from a Dominican beach house was an oversight, caused, in part, by his inability to speak Spanish.

Ah, well that makes sense. Charlie no habla taxes. Simple mistake! Plus, there's no way the House panel that found him guilty of all that stuff was legit — he wasn't even in the room when they decided.

Oh, that was because he just got up and walked out? Well, he must have had his reasons. He must also have had reasons for improperly funding his defense with campaign money:

The Federal Election Commission is investigating a complaint that Rep. Charles Rangel improperly used his National Leadership PAC to fund his legal defense on ethics charges for which he was censured Thursday...

“In all fairness, I was not found guilty of corruption, I did not go to bed with kids, I did not hurt the House speaker, I did not start a revolution against the United States of America, I did not steal any money, I did not take any bribes, and that is abundantly clear,” he said.

Hm. Perhaps the "at least I'm not a molester" defense is an indication that maybe we should move on from this ethics business.

In May, as he was departing a news conference in the Bronx, Rangel told a group of reporters that he didn’t “give a damn” whether Obama would endorse him.

Privately, Rangel told advisers that he wanted the president’s support, reasoning that it could make a difference in his race.

Bill Clinton is abandoning his old ally Charles Rangel, who is fighting for his political life as he seeks re-election to a 22nd term, The Post has learned.

Harlem Rep. Rangel won’t be getting an endorsement from the former president, who will sit out the primary, a Clinton source said.

We are not out of it yet, Charlie, don't you look at me like that. Who else we got, New York Post?

The ethically challenged congressman from Harlem yesterday got a full back-slap of support from equally troubled New York City Comptroller John Liu as Rangel wages his hardest-fought re-election bid yet.

Great! A full back-slap! That's wonderful. Wait wait, what's this "equally troubled" business about? Oh, federal authorities are investigating Liu's shady fundraising paperwork? The New York Times found "instances in which people listed as having given to Mr. Liu say they never gave, say a boss or other Liu supporter gave for them, or could not be found altogether"? Who cares. Liu's endorsement is gold, Charlie. Plus, no way anything comes of that investigation. Nobody's even been arrested.

A fund-raiser for the New York City comptroller, John C. Liu, whose campaign finances are under federal investigation, was arrested on Wednesday morning on charges that he helped illegally funnel thousands of dollars into Mr. Liu’s campaign account.