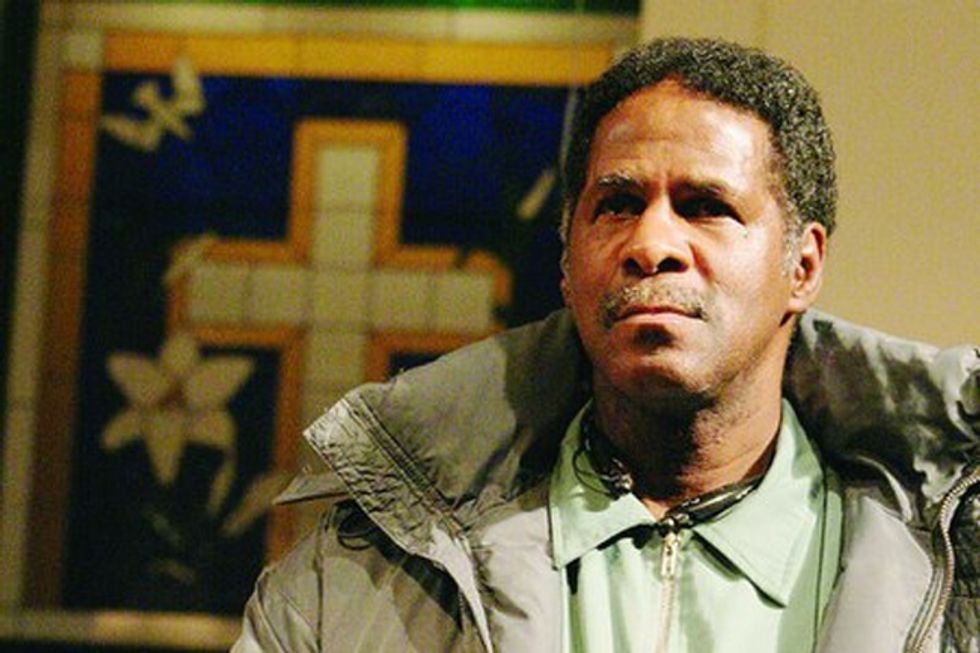 There's probably a perfectly reasonable explanation which will make us want to vomit.

Because Yr Wonkette loves you and cares about your health, we'd just like to remind you to make sure that, if you suffer from hypertension, you've taken your blood pressure meds before you read the rest of this story. OK? Good job. Now, here's the sweet-jesus we can't believe this crap details: In 2009, Lawrence McKinney was freed from prison after DNA evidence proved he could not have committed a rape and burglary for which he was sentenced to 115 years in prison way back in 1978. After being in prison for 31 years on a false conviction, McKinney was issued $75 and sent out into the world, maybe even with a hearty "good luck and keep your nose clean," or not. Now 60 years old, he's fighting the state to get up to $1 million in compensation, which he'd be eligible for if the state parole board had voted to exonerate him of the crime. Except they didn't, after two exoneration hearings, because apparently the state parole board is composed of tuff-on-crime idiots or something.

The bright side, if there is one: McKinney has applied for an exoneration to Gov. Bill Haslam, who strikes us as a generally sane human being, seeing as how he vetoed a bill to make the Bible the "state book" and put forward a state plan to expand Medicaid, although it was rejected by Republican lawmakers. If Haslam grants the exoneration, McKinney would be allowed to file for compensation from the Tennessee Board of Claims.

And why did the state parole board vote twice to deny McKinney exoneration? Sealed records, folks, although one member of the parole board that denied his first exoneration, Patsy Bruce, said that even though the court may have been convinced by the DNA evidence that McKinney couldn't have committed the crime, she thought he might still be guilty anyway. Bruce explained to a local TV station in September, after the second parole board vote, that despite the conviction being thrown out, she's quite sure she wouldn't change her vote today if she were still on the board:

DNA tests were conducted on several pieces of evidence from the 1977 burglary and rape. McKinney’s DNA was not found on the rape kit, but Bruce argues that’s not enough evidence to prove his innocence.

“All that proved is that it wasn’t on those two. Where is the test on the other two is the point that the parole board made yesterday,” Bruce said.

That's some pretty impressive logic. It wasn't his DNA on the rape kit, but maybe he raped the victim anyway without leaving DNA evidence, because what about that other evidence? According to CBS News, state prosecutors -- no, not McKinney's defense attorney, the prosecutors, said the "other two" pieces of evidence Bruce was so worried about didn't have any DNA on them, or the samples were degraded badly enough that DNA tests couldn't be conducted. They also said, of the DNA evidence that got McKinney's conviction thrown out, “if this evidence had been available ... there would have been no prosecution.”

So even if the prosecutors say, yeah, there's no case, the Tennessee prison system isn't about to clear McKinney's record, because he could still be guilty. Or maybe it was the one-armed man. A cynic might be inclined to think the Tennessee Parole Board simply doesn't believe anyone is ever really innocent.

Fortunately, Gov. Haslam's executive clemency decisions are not bound by Parole Board recommendations; Haslam's press secretary, Jennifer Donnals, said last week, “The Governor’s Office will conduct a thorough review of Mr. McKinney’s application and the (parole) board’s recommendation.” McKinney's treatment by the parole board has generated a fair amount of outrage; his case has been taken up by State Rep. Mark Pody, who's been pushing for reform of the state's clemency cases:

“A court convicted him and a court acquitted him,” Pody said. “Why should anyone else be involved?

“I have real concerns about how this is handled. I’ve asked research people to look at what states are doing it faster and better. No matter how this goes we need to take a look at this legislatively. I hope it’s one of the first bills filed.”

There's also a change.org petition calling on Haslam to exonerate McKinney, if online petitions do any good.

We can probably look for the usual Tuff-On-Crime crowd to complain that paying adequate compensation to someone wrongfully convicted, just because they've spent half their life in prison on a bogus conviction, will somehow encourage innocent people to go and get themselves convicted with the hope of a big payout after 30 years. You know how those people are.