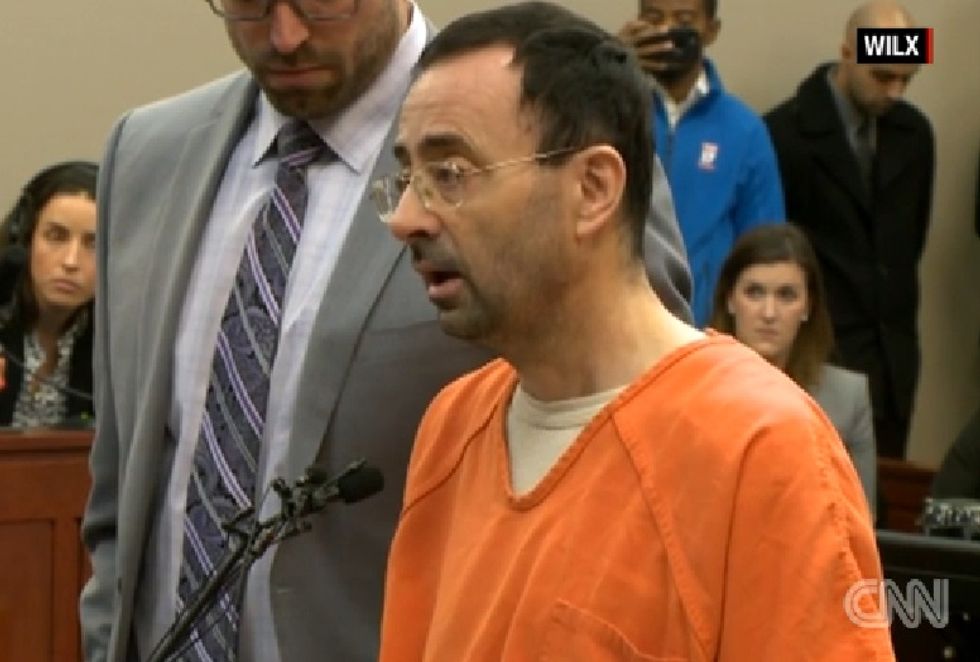 Larry Nassar, the former team doctor for USA Gymnastics and for women's gymnastics at Michigan State University, pleaded guilty to multiple counts of criminal sexual conduct. Starting today, as many as 125 of his victims (or their parents) will testify in the sentencing phase of his trial. Last month, Nassar was sentenced to 60 years in prison for child pornography; the victim and witness statements this week will help the judge in the case determine how many additional years he'll get for molesting and raping girls and young women, usually in the guise of "medical" exams, treatment, or conditioning for competition (please add all the irony quotes you want to that list). Beyond the criminal charges, more than 140 women are also suing Nassar, Michigan State University, and other defendants who they contend enabled Nassar and looked the other way when victims complained. Among the girls and women Nassar assaulted or raped are three of the five American women who won gold medals at the 2012 Olympics: Aly Raisman, Gabby Douglas and McKayla Maroney.

Strangely, this story is getting far less coverage than the NFL playoffs. That might say something about our national values, huh?

Kyle Stephens was the first to testify today, saying that Nassar had begun abusing her when she was six years old:

Nassar, a family friend, exposed himself to her in a dark boiler room. From then until she was 12 years old, he would pleasure himself in front of her, rub his penis on her bare feet and put his finger in her vagina.

At 12, she told her parents about the abuse, but they didn't believe her. The abuse -- and their denial -- left her feeling brainwashed, caused a split in her family relationship and led to crippling anxiety, she said.

Stephens said Nassar had compounded his abuse by convincing her family that she was a liar:

"Sexual abuse is so much more than a disturbing physical act. It changes the trajectory of a victim's life, and that is something that nobody has the right to do," Stephens said.

Nassar kept his head down and his eyes closed during the hearing, and wouldn't look at Stephens. It's things like this that make us think, despite our ACLU membership, that there's something to be said for a Clockwork Orange setup where Nassar would have his eye forced open. Look at what you're responsible for.

Gymnast Simone Biles, who won gold in 2016, posted this statement about Nassar to Twitter Monday:

Aly Raisman tweeted yesterday that attending the hearing would be "too traumatic" for her, but that her impact letter would be read in court in front of Nassar. At least he can't close his ears.

When he pleaded guilty in November, Nassar said he was awfully sorry about the whole thing, but that he's also ready for the healing to begin, which seems mighty generous of him:

"For all those involved, I'm so horribly sorry that this was like a match that turned into a forest fire out of control," he said.

"I have no animosity toward anyone. I just want healing. ... We need to move forward in a sense of growth and healing and I pray (for) that."

He has no animosity. That's nice to know. It would be much worse if he'd felt animosity while he was digitally penetrating girls -- which is rape! -- in the guise of a "medical exam."

Judge Rosemarie Aquilina wasn't buying Nassar's rush to get to the healing already:

"You used that position of trust that you had in the most vile way to abuse children," she said. "I agree that now is a time of healing, but it may take them a lifetime of healing while you spend your lifetime behind bars thinking about what you did in taking away their childhood."

Nassar is never going to come out of prison, for which we're glad, but the amount of abuse he got away with, in such a central position in a major sport, doesn't just happen all by itself, as this painful but excellent piece for ESPN the Magazine details. Nassar was surrounded by an infrastructure of enablers,

a group that included coaches of club, collegiate and elite-level gymnasts, the USA Gymnastics organization, medical professionals, administrators and coaches at Michigan State University, and gymnasts' parents, whom he groomed just as effectively as those he violated.

Some may have been complicit, some may have been snowed by Nassar, who was reportedly a master manipulator, but as with the Penn State abuse case, Harvey Weinstein's casting couch, and any number of other cases of men misusing their power against women, when victims tried to speak up, there were people there to cover for the abuser, institutions that found it easier to keep things quiet. Even now, the ESPN piece notes, people in the sport and parents of gymnasts are very guarded when they talk about those around Nassar, like US Gymnastics coach John Geddert, who worked with Nassar for over 25 years. ESPN is careful to say it's "not clear, even today [...] how much Geddert knew about Nassar's serial sexual abuse," but notes that one woman testified Geddert had witnessed her being "treated" by Nassar -- that is, with Nassar's fingers in her vagina (his preferred "treatment" for back pain, according to several victims) -- and Geddert simply joked that her back really must hurt.

Even with the charges and scandal surrounding Nassar, ESPN had some difficulty getting people to talk about Geddert:

Many of those contacted said they were reluctant to speak publicly about Geddert because they either have children involved in gymnastics in the Lansing area or careers in the sport and they are mindful of the power he wields.

It's a disturbingly familiar story, but an important one. Go read it when you have a chance. Putting abusers like Nassar away is only the start: Somehow we need to find ways to unmake the structures of power, privilege, and denial that put a Larry Nassar in a position to get away with it for so long.

Oh, were we supposed to have a joke in here? Maybe we could make fart noises while yelling Fuck the Patriarchy. Or just yell louder.

Yr Wonkette is supported by reader donations. Please click here to contribute to our day-drinking fund.