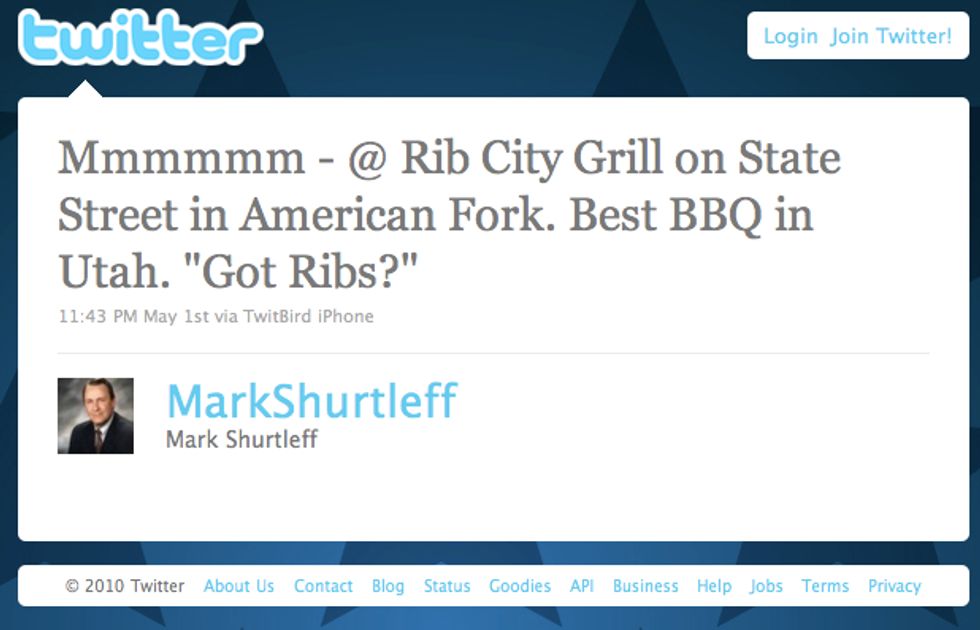 The entire state of Utah is absolutely giddy today as early this morning it got to kill a death row guy by firing squad. Ronnie Lee Gardner was officially declared dead at 12:17 a.m., after what observers claim was an awesome midnight laser light show with everyone's favorite Jock Jams songs and the funny part where they pretended to be shooting Gardner but then turned their guns at the last second and shot a huge container of green Nickelodeon slime above Gardner's head. Then after they actually shot him, the warden breathed a sigh of THAT WAS TOTALLY BAD ASS, and the real party begun.

There is still a ticker box at the top of the Utah Department of Corrections website that provided every single detail of the whole affair (yes, before he died, Gardner watched the entire Lord of the Rings trilogy and DID THE DEW), but for some reason it updated only every 30 seconds. COME ON, WE NEED TO KNOW IF ANYONE HAS STRUMMED AN AIR GUITAR OR DONE THE JACK-OFF MOTION TOWARDS GARDNER.

The Utah Attorney General announced he was giving the go-ahead for them to shoot the guy via Twitter, of course, and we should all be so lucky to have our impending deaths announced there so Ashton Kutcher can laugh at the Twitpics of us doing our hilarious oh-no-I'm-gonna-die faces. The occasion was made all the more solemn by the announcement being made in the same place where the Attorney General made this announcement:

Haha ribs are great! But they're even better when they're the bloodied ribs of the guy you just ordered your bureaucrats to kill! HIGH FIVE!

Utah used to give ribbon pins to people who did executions, but everyone decided that pins are TOO LAME for something as awesome as executions. "The staff preferred something a little more modern than the ribbons," the spokesman said. "Since people don't walk around displaying those anyway, we're switching to a coin."

Yay! Now every time you go to a barbeque and somebody says, "Hey, wouldn't it be awesome to get the chance to shoot and kill a prisoner? Those guys are so lucky!" And you could just pull out your coin and be like, "Hey, do you have change for you are so jealous of me right now?" And they would be like, "Awesome! There's that death row guy's decaying head where George Washington's should be!"

Gardner has a cool story. Him and the state of Utah go way back:

Born in Salt Lake City in 1961, Gardner was 6 when his siblings taught him to huff gas and glue. By age 9, he had landed in state custody for theft. When he was 10, police investigated a report that Gardner had traded a BB gun for marijuana. A stepfather used a teenage Gardner as a lookout while he burglarized homes. A foster father paid Gardner for sex.

The government today was sad that it doesn't get to lock Gardner up another time, which is so fun, but maybe they can find a home for his body as terrible as the foster homes they placed him in when he was a kid.

But they can be proud that once Gardner was an adult, he did cool stuff like this:

The intervening 25 years were punctuated by attacks on other Utah State Prison inmates and a standoff in a visiting room during which he broke a glass partition, barricaded the door and had sex with his half-brother's wife as officers looked on helplessly.

At the execution, a niece of a guy Gardner shot while he was trying to escape from a courthouse said her uncle wouldn't have wanted Gardner shot because "murder doesn't justify murder." TOTAL BUZZKILL, WHO INVITED THIS LADY, THIS IS SUPPOSED TO BE FUN.

But in the end, it was fun. One of the guns of the shooters had a blank and not a bullet in it so everyone could make fun of that shooter later for being a fag. A hood was placed over Gardner's head to make things extra awesome. At that point, one of the corrections officers probably came over to give Gardner a high five.

Then shots were fired and that Mountain Dew sprayed out of Gardner in the most EXTREME manner. [Salt Lake Tribune]