Vatican Might Be A Little Nicer To Gay Homosexuals, Even If They're Still Going To Hell 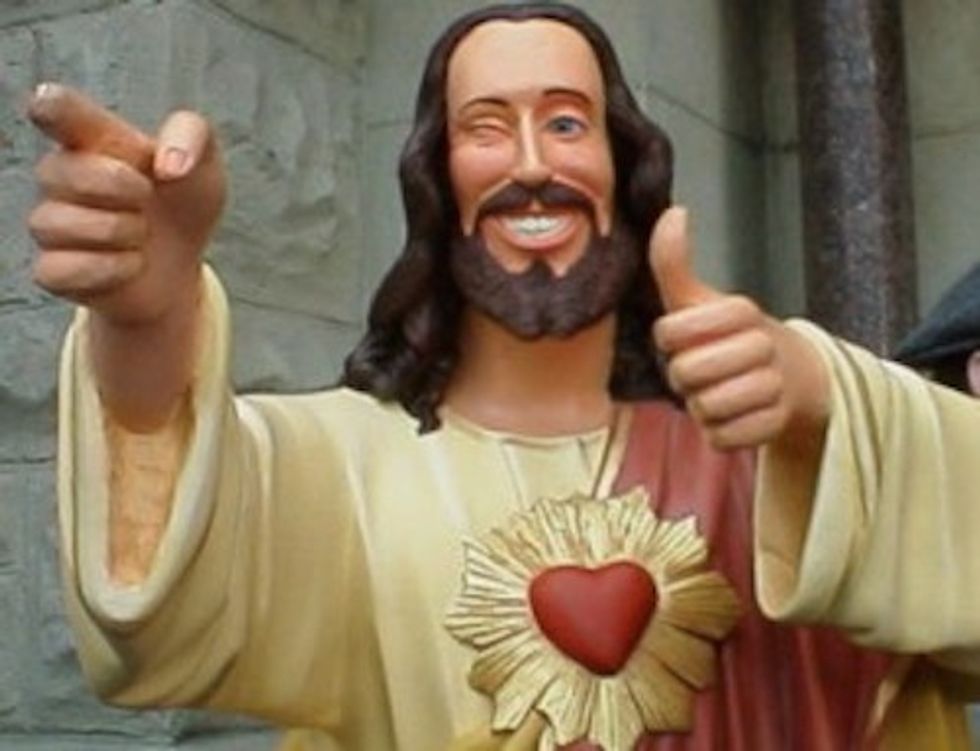 Some very strange things are happening at this year's Vatican Sleepaway Synod -- the annual gathering of the Catholic Church's bishops to decide who's in and who's out, and should the gay panic be raised to 11 or 11.7 this year? First, New Pope makes the bishops take sex ed, and now there's a rumor that maybe, just maybe, the Vatican might be willing to consider discussing the possibility of slightly altering its position on currently hell-destined gay homosexuals.

"Homosexuals have gifts and qualities to offer the Christian community: are we capable of welcoming these people, guaranteeing to them a further space in our communities? Often they wish to encounter a Church that offers them a welcoming home," said the document, known by its Latin name "relatio".

This does not mean the Vatican is about to hoist a pride flag up its pole. Yet. The document may recognize that gays are people too -- and maybe some of them are not even that bad! -- but they are still morally problematic because ... well, we've never been able to understand why they are morally problematic, but we're talking about an organization that needed more than 350 years to forgive Galileo for being right about the Earth not being the center of the universe, so the Church doesn't exactly rush into righting its wrongs.

While the Church continued to affirm that gay unions "cannot be considered on the same footing as matrimony between man and woman", it should recognize that there could be positive aspects to relationships in same-sex couples.

"Without denying the moral problems connected to homosexual unions it has to be noted that there are cases in which mutual aid to the point of sacrifice constitutes a precious support in the life of the partners," the document said.

It's almost like gay people have some redeeming qualities and are even capable of love, just like regular human beings! This is a pretty big deal coming from the Vatican -- not that all of its members are going to take the news well. Cardinal Raymond Burke, for example, who might still be a tad bitter that Pope Francis removed him from the Congregation for Bishops, insists that he is going to hate gays now, hate gays tomorrow, hate gays forever!, and he encourages all good Catholics to do the same, including shunning any ew-gay relatives they might have. Because that's what Jesus would do.

"If homosexual relations are intrinsically disordered, which indeed they are — reason teaches us that and also our faith — then, what would it mean to grandchildren to have present at a family gathering a family member who is living in a disordered relationship with another person?"

The cardinal also says that children should not be exposed to anyone who "suffers from same-sex attraction," which is an interesting position to take, because last time we checked, the Catholic Church's leadership in America really wasn't in the best position to opine on what children should and shouldn't be exposed to. Also, we happen to know many lovely gay type people, and they do not seem to be suffering at all. But what do we know?

Anyway, hateful bigoted American bishops aside (whom New Pope has already instructed to stop obsessing about gays and 'bortions and slut pills all the time, Jesus Christ!), this development at the Vatican is some good news that should make those of us who are not bigoted assholes cautiously optimistic. Yes, the Church still has a long way to go if it's trying to figure out how to maybe be nice to The Gay even if it says somewhere in the Bible that The Gay is icky (even though we have looked and, hand to God, cannot find that part). But even asking itself if maybe being decent human beings to fellow human beings is something the Church should maybe look into is a good, long overdue step in the right direction. And hopefully it won't take another 350 years for the Church to get it right this time.