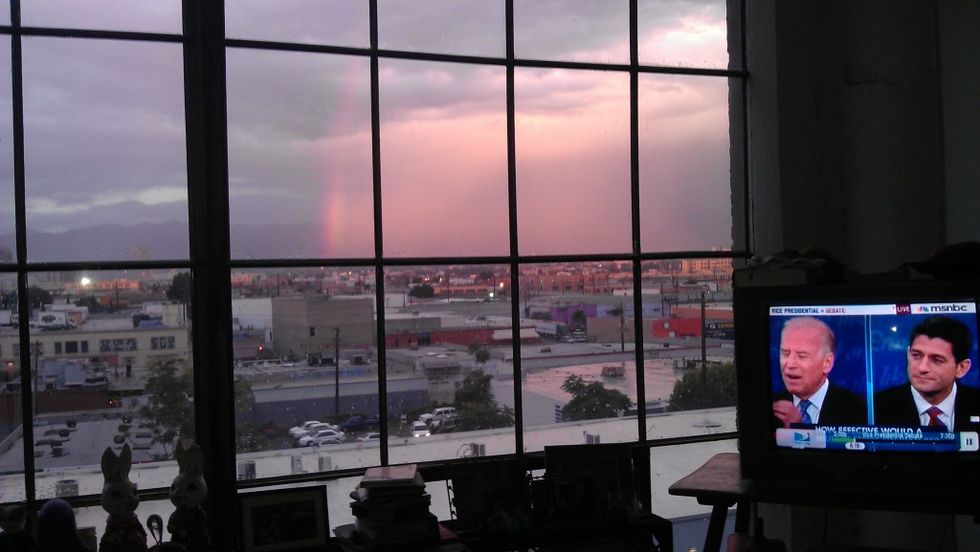 What's this, Sara Benincasa is joining us tonight, in our domicile? Does she have hair to braid? We will soon find out!

In the meantime, here is the first and last nice thing we will most likely say about Paul Ryan tonight: Paul Ryan sends copies of NOBUMMER's birth certificate to any constituent who writes him all "WHAR KENYA WHAR," and even before Obummer released his long-form certificate, Ryan's office sent to those same "folks" a copy of the Hawaiian registrar's statement about the Communist usurper's live birth. And we think that is terrific, for reals! (GENTLEMANLY.) (We mean us.) (We're done now though.) (Don't worry.) (WARBLOG!!!!!)

Also too, before we start, here's your damn drinking game:

If you are in California, Washington, DC, New York, or any of the other civilized states, smoke some legal marijuana before the debate commences.

As to the rest of you, we will occasionally yell at you DRINK for any or no reason at all. (But seriously, if Joey calls "Mr." Ryan "junior" or "sonny" or "kiddo" or "boy," you may do the Hokey Pokey and finish the bottle in feral joy.) And that's it! We can't say to drink if OHJB says "God love ya" or talks about Scranton or the Violence Against Women Act, or cries when telling the story of his family, or says "literally" about something figurative, or is magnificently romantic to Dr. Jill, because we will not be liable for your alcohol poisoning. So, you know, just use your worst judgment, and we'll see you at nine.

8:59 PM stupid Eastern Standard Time -- Benincasa is in the house! And also she is out of the house! We have sent her to Fresh & Easy for liquor, because we have drunk this house dry. Maybe she will come back again? Who can ever tell???

9:01 PM -- Was Libya an intelligence failure? Old Handsome Joe does not care to answer that question, but promises not to lie and pivots to Bamz ending Iraq and Afghanistan and Miffed Romney being a fussbudgety asshole about both. Has he mentioned Barry killed Bin Laden? Still, not answering the question though he is(n't), he sounds sober and Joe-like and great.

Paul Ryan's all nah mang they already lied about the Youtube and is mad that we didn't have enough security. Didn't he watch Jason Chaffetz's interview? Uh oh, Joe is gonna bite someone's head off, fangs bared.

9:09 PM -- Oooh, looks like Joe watched Jason Chaffetz's interview! Also? Romney's a pud. Let him give you a list. (Joe is pissed, y'all. Said every single thing that came out of the kid's mouth was "untrue." He is smiling, he's showing his choppers, but he does not mean it.) Joe's assertion that they didn't "know" that the embassy wanted more security does not seem ... likely.

9:11 PM -- Of course Paul Ryan thinks we shouldn't pee on Taliban corpses, oh gosh yes. What is he, a lunatic? No, he is a libertarian. There is some shade of difference. (Sometimes.)

9:16 PM -- Biden: "You wanna go to war? That what you want?" He is pure contempt for this whippersnapper daring to lecture him on being a joke when it comes to Iran. We are afeared of what might burst forth from his grinning skull!

9:19 PM -- Biden is schooling the kid on how nukes work. It might be a while. Blah blah blah Netanyahu. Would you like to see the rainbow outside our window right now?

9:24 PM -- Joe is now literally kissing his knuckles as Paul Ryan talks. OH KNUCKLES, he is saying, to his knuckles, SOMEDAY, KNUCKLES. SOME DAY.

9:28 PM -- OK now we are on the economy we are sure Paul Ryan will not say anything that will make Joe Biden ache to punch him in his earnest puppy face?

9:41 PM -- We are behind again, because we had to let in Sara with the wine, and then we had to go to the neighbors' for a corkscrew. And then chicken. But SARA IS BACK, and she points out the audience is bizarrely, tensely quiet. They are probably as scared as we are. We do not like seeing Joe Biden want to murder people.

9:43 PM -- Fuck it, we know we told you we wouldn't make you drink when Joe Biden weeps for his family. But drink. (We all could use one, right?)

9:44 PM -- Old Handsome Joe Biden tells Paul Ryan if he wants jobs, to get out of his and Bamz's way. Paul Ryan responds with blah blah blah One Party Control, like Ben Nelson and Mary Landrieu were Democrats.

9:54 PM -- Paul Ryan bullshitting about Medicare has LIT'RALLY given Joe Biden a stroke. He is gazing at the ceiling, his eyes rolling back in his head. He may start foaming. He's furious.

9:58 PM -- Have we ever told you that our son, who is now an 18-year-old dickhead, originally came to us when he was a year old, and his first mama had died? We were 22, and making $22,000 per year. The only thing that made it possible was Social Security. Listening to Paul Ryan piously spout off about how he loves Social Security Survivors Benefits while trying to dismantle the system, is making us kiss our own knuckles. Oooh, that puss. Ooh, that earnest, lying puss. Some day, knuckles. Some day.

10:01 PM -- So far Joe Biden wins, for not decking that little creep in the mouth with Joe Jameson and Pops McGee.

10:08 PM -- Joe Biden makes a DRAMATIC face of ORLY? like a combination of Auntie Mame and a young black woman giving you side eye. It is fairly (by which we mean completely) awesome and hilarious.

10:15 PM -- Sara Benincasa is taking the reins for a while while we relax and chill the fuck out. Enjoy her!

10:17 PM -- It is I, your Sara Benincasa, you fucking fucks. You stupid libruls probably think Joey Biden is wiping the floor with the handsome young man from Handsometown. Hahah, I am here to prove you wrong! (J/K, Biden is killing it.)

10:24 PM -- Your Wonkette, Rebecca, says Joe Biden is trying really hard not to reveal classified info right now, which is why he is stuttering. Probably completely accurate!

10:25 PM -- Myself (the Benincasa) and your Wonkette (the Rebecca) would like to note that our vaginas feel alone and untended by these gentlemen. GIVE US OUR PRECIOUS SOCIAL ISSUES!!!111!

10:27 PM -- Someone in the audience just audibly went, "Ooh!" Or maybe it was "Whoo!" like some sort of owlish impression.

10:28 PM -- Rebecca just pointed out Ryan's Sincerity Forehead. She also points out how hard the nuns all hate Paul Ryan. "They hate him as hard as Joe Biden hates him," she sez. HAHAHAH I AM LOL!!!111!!

10:34 PM -- Rebecca points out that JUDGES ARE SUPPOSED TO MAKE DECISIONS THAT IS THE POINT OF JUDGES PAUL RYAN.

10:41 PM -- I, Benincasa, want to put Paul Ryan inside the vagina he so hates. This is a winedrunk way to say I would let him put it on me. Plus it would be extra fun to 'bort his baby.

10:43 PM -- Joe Biden is so chill now. Did somebody slip him a sweet sweet doob that he puffed through some hidden orifice?!

10:45 PM -- I want to put Joe Biden saying "Honey, it's gonna be okay" over and over again on loop in my head during secks of all kind.

10:47 PM -- The next debate is Tuesday? I need a longer refractory period to cool down from this hot hot rumblin'. YEAAAAAAAH.

In summation, everyone is a homosexual, except for Martha, everyone wins and no one loses, Jesus is the reason for the season, the end! Thanks for hanging out, you unwashed beasts! Haha, haha, also, FYI, you can hang out with Rebecca and I, Benincasa, on the Twitterz.