Victoria Jackson: Biking Is The Gateway Drug To Socialism, Hell 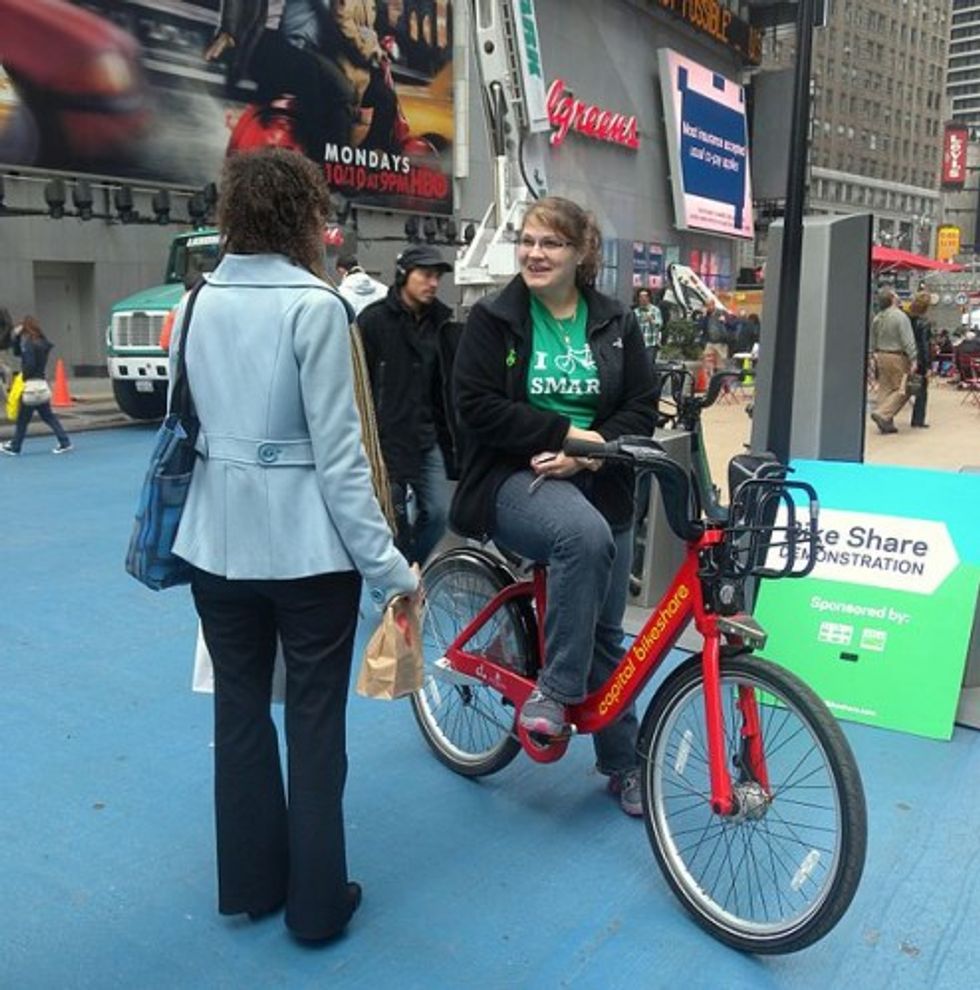 I had dinner with Beverly the Alderman (old-fashioned word meaning head of city council) of Franklin, TN.

Before we unpack how dada-ist that dinner must have been for poor Beverly, a quick note. VicJack, "alderman" does not mean "head of city council" nor is it antiquated. It means anyone who serves on a municipal assembly where they call their councilcritters alderman, because they can. See, for example, Chicago, which has approximately one billion alderman and is the subject of an almost infinite number of crappy television shows and movies where one alderman or the other is corrupt.

Moving on. What did VicJack want to talk to this elected representative about, pray tell?

She was explaining to me that although “Franklin Tomorrow” sounds like an Agenda 21 front group, (they have all the buzzwords: parks, open space, bike paths, “sustainability” posters) – they are simply a group of concerned citizens who want to keep their town clean and pretty and “sustainable” in the future. They have solar-powered-trash-compactor-garbage-cans on Main Street. Does that mean they’re communist or just economically frugal with their local tax-payer money?

Readers, is Agenda 21 a thing we still care about? YES IT IS. If your city council is pro-biking and open space, they are trying to murder you with sustainability! Keeping your town clean is the first step to socialism. Good thing VicJack is there to set old Beverly the old-fashioned alderman straight!

I asked Beverly why they are using Agenda 21 buzzwords if they are not supporting Agenda 21. Beverly said she has read the entire Agenda 21 (United Nation’s plan for global socialism that ultimately takes private property away from US citizens and forces them into community housing and public transportation) and does not support it in any way. She even had her town of Franklin “un-join” ICLEI when she realized that the past Alderman had joined it. She explained to the city council that ICLEI was bad not good.

Yr Wonkette has, in a previous life, been a person who was forced to attend many city council meetings. Please be assured that "she explained to the city council that [insert any thing you want here" was bad not good" is an entirely accurate way of reporting the level of discourse at city council meetings. So, besides the usual ooga-booga of the brownshirts of the UN coming to take away your stuffs, what is the problem with, you know, saving resources?

It’s the “Green Movement.” It’s a false religion. This definition assumes that there is some problem anticipated in the future in feeding or sheltering the people or something. It hints at population control. It reeks of Earth Worship which has been hijacked by the Progressives/Socialists for political use in spreading their anti-freedom, feudalistic, political system...

Christians prepare for the future but don’t worry about it. I believe if more millions are born, God will provide more food and shelter, if the people follow Him.

Here at Wonkette, we are no stranger to dominionists, though dealing with them usually falls to Dok Zoom on Sundays. However, we're not sure we've ever come across such a succinct, or such a dumb, explanation of the theory. As long as you follow Jesus, you'll get all the stuff. All of it. So prepare, but don't worry. Jeebus will take care of you, little lamb. Little angry paranoid lamb.
[Victoria Jackson Show]
snipy