Victoria Jackson Will Root Out The Muslim Menace (Grover Norquist) 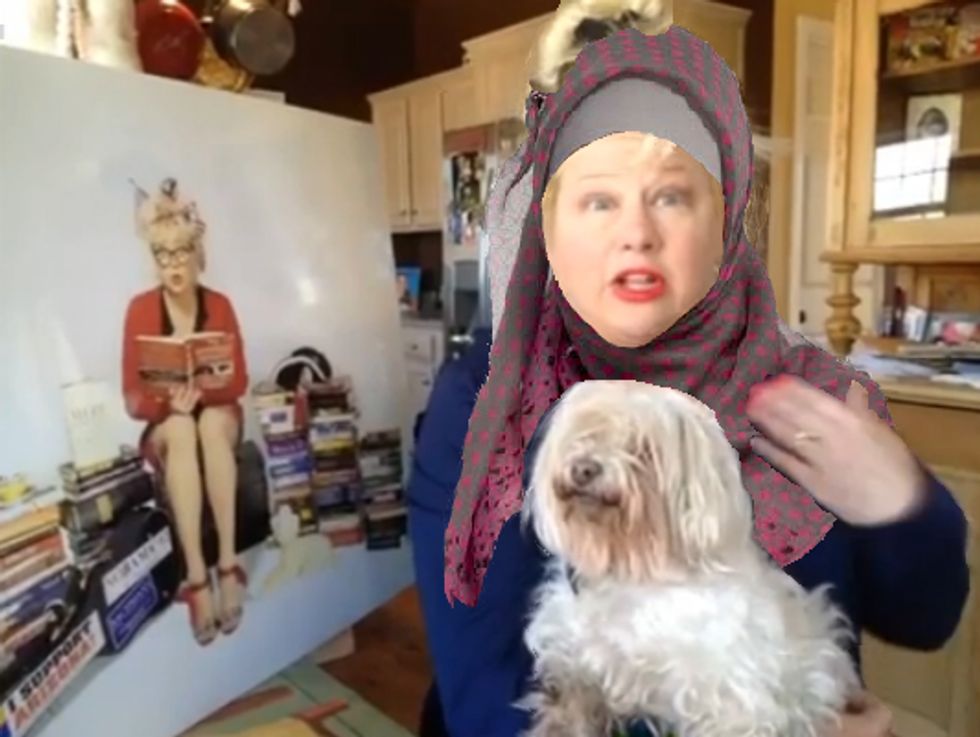 American Hero andunsuccessful county supervisor candidate Victoria Jackson is very concerned about the Muslim Threat in America, of course, and is especially sad to see that even supposed conservatives like Grover Norquist are secretly helping to help Sharia Law creep into Our America. And so she has published a very thoughtful examination of Grover Norquist's disloyalty to America, in a two-part series that is Just Asking Questions: Is Republican Grover Norquist Connected to Islamic Terrorists? Also, Who is Grover Norquist? Friend or Foe?

For one thing, Grover Norquist is married to a Muslim. Really, that should be all you need to know, but it gets even worse! Islam, Jackson reveals, "has infiltrated not only our textbooks, schools, courts, prisons, churches, universities and the White House, but it has infiltrated the Republican Party and the conservative movement." Basically, we are already living under Sharia law, but we don't even know it yet, except for brave patriots like V-Jack who have read and believed every wackaloon conspiracy website out there. No less an authority than completely sane conspiracy theorist Frank Gaffney says that Norquist has deep ties to the Muslim Brotherhood! And WND publisher Joseph Farah, who knows a conspiracy when he sees one, which is always, says:

“Grover Norquist is not a conservative…He may have been at one time. But he is no longer -- that’s for certain…

1. “He’s shockingly pro-Islamist and has used his well-developed connections in Washington to spread the tentacles of stealthy jihad through the corridors of power, including the White House.”

2. “He’s is unashamedly pro-perversion, given his position on the advisory board of GOProud.”

3. “He is a phony economic conservative who helped mislead tea-party Republicans in control of the House of Representatives… giving Obama all the money he needed to keep destroying the free-enterprise system through the end of his term.”

There are scary Muslims everywhere, says V-Jack, and when Norquist spoke in Tennessee recently, she was there to GOTCHA him!

V-Jack has read Frank Gaffney's book, and she found him a magnificent bastard who reveals all of Norquist's terrorist links, especially his having founded the "Islamic Institute," which Norquist seems to think is actually called the "Islamic Free Market Institute," which just puts those good words in the middle to confuse people. Commenting on his answer in the video above, Jackson is sad because he never REALLY answers her question about why he started the group:

Then Grover rambles on about how Islam is just like every other religion in that it is unaware of the free market economics hidden in its “theology.” What? Who cares about taxes when your head is being chopped off?

As everyone knows, Islam is a decapitation-based faith, and until you acknowledge that basic reality, there's just no mutual basis for conversation.

Jackson also gives us some choice samples from her fact-filled conversation with Norquist after his speech. Apparently, all the man does is mumble! Their conversation is punctuated by interruptions from ignorant RINOs who play a sort of Uninformed Greek Chorus to Victoria's Shining Light of Truthiness:

AFTER Grover’s speech, I approached him, holding my marked up copy of “Shariah The Threat.” Grover had not answered my question sufficiently. So, I tried again…

Vicki: (Intense eye contact) So, why did you start the Islamic Institute?

Vicki: So, Frank Gaffney is lying. What about John Guandolo? Ex-FBI.

Grover: You know why he was fired from the FBI?

Grover: He was sleeping with an informant.

Vicki: I know, I sat next to him on a plane for three hours. He’s my friend. So, that means you aren’t affiliated

with the Muslim Brotherhood?! What about all the other people and facts? The Holyland Foundation Trial facts,

socialistic policies that crashed our economy…

Vicki: I used the wrong word. You “supported” raising the debt ceiling! You support Open Borders, the Ground Zero Mosque…

all these things that are not Republican or conservative…

Uninformed RINO: (interrupts loudly) In 1963 everyone was talking about…what was it…Communists…

Vicki: McCarthyism?! Yeah, well, McCarthy was right, there were Communists and they won. Our president is a Communist, his grandparents were in the CPUSA, as was Jarrett’s, and Axelrod’s…Paul Kengor (author of The Communist) has their

Communist…(I looked into Grover’s eyes when I said this, and I could vow there was a twinkle in his eye, like he was

Juicy! There are communists and Muslims and Progressives (SAME THING!) everywhere! Oh, and then Norquist insults Jackson with the worstest insult a communist progressive traitor can ever throw at a Patriot, but she's ready:

Grover: The fact that you brought up that my wife is Muslim shows you’re bigoted!

Vicki: No, it doesn’t! My husband’s a cop. That tells a lot about a person.

If you marry a Muslim, their Muslimness rubs off on you. If you marry a cop, you're for law-n-order! This is simply a science fact, which is why Yr Doktor Zoom used to be -- at least partly -- an asthmatic Jewish linguist who went to Oberlin, though he is less so since the divorce. In any case, V-Jack is building to her killer point here. Just watch this Socratic dialogue, and learn:

Vicki: I’m going to be on the radio tomorrow so please answer this. (I’m still staring intensely into Grover’s eyes searching for truth). Why did you start the Islamic Institute (Islamic Free Market Insitute)?

Vicki: You and that guy…that Muslim guy connected to Alamoudi…

Vicki: (incredulous) You started the I.I. to teach Muslims that free market values were good?!

Grover: ...and that they are Shariah compatible.

Well that right there proves the man is A Idiot, since the Constitution clearly says "Free Market Values" about seven hundred times, although it doesn't mention "Separation of Church and State" even once.

Ms. Jackson muses over the terrifying implications of her conversation:

I’m thinking…why would Grover care if Muslims think free markets are Shariah compatible? He wants to help their Middle Eastern countries attain a higher standard of living so they won’t move here? He wants them to vote Republican? He wants them to keep free market economics when they take over America and install Shariah as the law of the land, so he can stay rich?

And there you have it: Grover Norquist and his Muslim wife are actively working to promote Sharia law so that they can profit from America's destruction. It's hard-hitting citizen investigators like Victoria Jackson who are going to save America from going down the tubes, that's for sure.

In summation, she explains who this Grover Norquist guy REALLY is. The man whose idiotic pledge to never raise taxes has made it impossible for Republicans to ever cut corporate welfare (since ending a tax break is a tax "increase") is actually exactly the same as Barack HUSSEIN Obama:

From his associations with Saffuri and Alamoudi, his support of the Ground Zero Mosque, his lack of concern for Islamic civilization Jihad, his refusal to admit its existence, his marriage to a Muslim, his support of non-fiscally conservative policies while claiming to be a fiscally conservative Republican, his overall disingenuous behavior, incessant mumbling, avoidance of direct answers; and from the opinions of many conservative leaders, CIA and FBI who are more informed than I, I conclude that Grover is connected to the Muslim Brotherhood, is aiding and abetting the enemy, like Obama, and both are traitors, punishable in a court of law.

They're so cute when they start eating each other, aren't they?

Also, Jackson lets us know that after Norquist's talk, she found out that she was actually the hero of the day:

As the crowd was dispersing, a polite man with a white mustache approached me and whispered, “A lot of us are thinking what you’re thinking.” I said, “You are?!” He nodded knowingly. “There were more of us here than you realize.” Hallelujah. I had mistaken their silence for apathy or ignorance, maybe it was southern grace. I am sure out of my comfort zone confronting strangers and accusing them of treason. But, someone’s gotta do it.

It's always good to know that however much you may be ridiculed, the silent majority secretly agrees with you, although they may be afraid to speak up. We hope that Victoria Jackson will keep exposing secret traitors in the conservative movement -- we bet that if she looks hard enough, she can find evidence of disloyalty EVERYWHERE.