Virginia Guy Knows Who Ended Slavery, And It Was Definitely Not 'The Government' 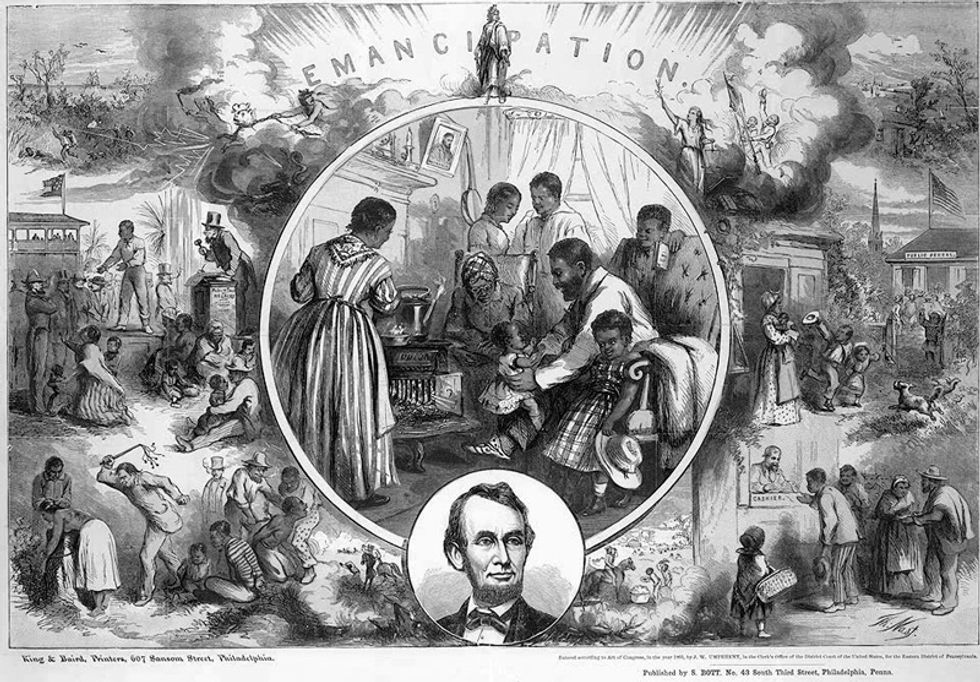 A Leesburg, Virginia, town councilman has a novel theory of how American slavery came to an end: God did it, not big government. We're inclined to think perhaps He had a little help from Ulysses S. Grant and William Tecumseh Sherman, plus a couple million other fellows in blue uniforms, as well as a bearded gent who favored stovepipe hats, but sure, let's hear out this Thomas S. Dunn II and see what he's got to contribute to the conversation.

The Leesburg council was considering a proposal to create a Diversity Commission, which would have the mission of "improving outreach and communication with minority communities, encouraging minorities to apply to available town government jobs and fostering an inclusive environment in Leesburg." OK, that sounds like a worthwhile thing. What's Mr. Dunn's problem with it?

“It’s the . . . hand of God touching the hearts of man that will bring unity within diversity, it’s not government,” Dunn said at a meeting about the commission Tuesday. Ah, so let's just wait until that happens. Seems like a pretty strong argument!

Dunn was replying to a comment during the meeting by Phillip Thompson, the president of Loudoun County's NAACP chapter, who stirred up trouble by asserting that if the government hadn't intervened in the affairs of private property owners, then he'd still be "in the fields picking cotton." And Thompson in his turn was replying to an earlier speaker in the meeting, who'd said that government had no business meddling in civil rights matters, because Freedom and the Market, probably. Thompson later explained his exotic "government should address civil rights" perspective further to the Washington Post:

“The bottom line is that most, if not all, civil rights matters that have been handled in this country have been handled by government action,” Thompson said in an interview Friday. “I went a little over the top on it, but I used the analogy that if the government hadn’t intervened, I would still be a slave in the field picking cotton. Government had to act, or I wouldn’t be here.”

Thompson's crazy talk did not sit well with Mr. Dunn, who was participating in the meeting via a conference call, and was astonished that anyone would drag slavery into a discussion of race and diversity:

“Shame on you, Mr. Thompson, for throwing slavery into this discussion,” Dunn said. “There are people who feel that ... government is supposed to be the answer to everything, and Mr. Thompson, I don’t believe that government freed our slaves we had in this country. That was an evil that this country had. It was the hand of God touching the hearts of man that freed those slaves.”

Once again, we're pretty sure that the hands of the Army of the Tennessee torching everything between Atlanta and the Atlantic also played some role. The Battle Hymn of the Republic is a lovely song, but in practice, minie balls, railroads, and devastating artillery barrages had much higher hit points than His Terrible Swift Sword.

Dunn continued his sermon, in any case, explaining that only God could end racism and discrimination, so there's no need for people to actually do anything, which we suppose has the added benefit of not requiring any expenditures while we all pray for people's hearts to change:

For those who hope to change “any shortfalls that we have in how we handle different cultures and races, that’s holding yourself up too high,” Dunn said, “because that has to come from God.”

He continued: “Jesus said, ‘I give you one commandment, and that is to love one another.’ He could have said, ‘go out and create a diversity commission,’ but he didn’t.”

Jesus also didn't say anything about antibiotics or even washing your hands after you shit, so we hope that Mr. Dunn will keep that in mind when it comes to his personal medical and hygiene practices.

If you disagree [with the diversity commission], we can discuss our disagreement. But when you try to take it to this high level and dismiss it based on ‘God will fix it,’ that’s just being disingenuous and not constructive at all.”

This Thompson fellow sounds like a troublemaker who washes his hands and goes to medical doctors when he's sick.

Dunn did follow up with an email to the Post acknowledging that, OK, sure, maybe the U.S. government had something to do with the end of slavery, but only because God made them do it:

“When you read the comments of the men who voted to pass the 13th Amendment, you will find they were lead [sic] by God to correct a moral not a legal wrong. Lincoln clearly felt that way,” Dunn said. “Of course there was a government document involved called the Constitution. I feel much of our government has been ordained and established by men under the influence of God.”

That's all a convenient fiction, Mr. Dunn, but as you well know, the Bible has fuck-all to say about representative democracy. If you truly want to live in accordance with the Word of the Lord, you'd better start militating for a return to monarchy and civil rule by a priestly caste. Then again, maybe that's already where you're going with this.