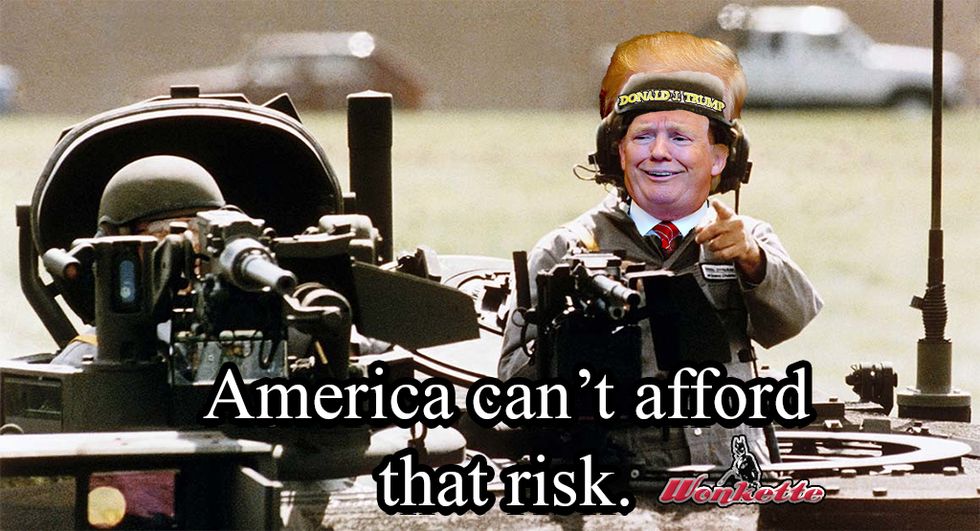 Morning Wonketariat! Here's some of the things we may be talking about today, but first, A BABY SPOTTED DEER!

As if the traffic in DC wasn't bad enough, Trump wants to hold a military parade down Pennsylvania Avenue after seeing Bastille Day celebrations in France last year. I don't think he knows WHY they celebrate Bastille Day...

Depending on who you are, Christopher Steele is either a patriot or a pariah, but the story about how THE DOSSIER became Steele's albatross is fascinating. [Morning Maddow]

Richard Burr and Chuck Grassley are being all wishy-washy on whether or not DJTJ and Jared Kushner will speak in a public hearing after Jared Kushner was "spooked" by Dianne Feinstein releasing the closed-door transcripts from Fusion GPS.

Even though his lawyers are telling him to sit down and STFU, Trump really wants to talk to Robert Mueller about all the Russian fuckery he swears doesn't exist.

In a rare display of civic duty, congressional lawmakers are trying to cobble together a long-term funding bill to appease the hawks screaming for more defense while also doling out cash for disaster aid, but the House Freedom crazies and Trump are throwing tantrums, the latter stating that he'd "love to see a shutdown."

House Republicans rammed through a stopgap spending bill that drowns the Pentagon in a sea of cash until election day and kicks a can full of everything else down the road for another month, but the Senate has already thrown it in the trash.

John Kelly thinks Dreamers are all lazy-ass little shits who won't even deport themselves, let alone sign up for DACA.

Jeff Sessions was speaking at the Heritage Foundation and began prattling on about how marijuanas are the reason fly-over country is hooked on hillbilly heroin, and they should really "take a couple of Bufferin and go to bed." [Video]

A California court has ruled in favor of a "cake artist" who refused to make a fag cake after citing a First Amendment right to believe that gay cakes make Jesus cry.

Republicans are looking at Trump's poll numbers and growing a long, rubbery smile as they amuse themselves with the Democrats' historic ability to snatch defeat from the jaws of victory.

Now that the most recent FEC financials are coming out, the GOP leadership is sounding alarms in reliable Republican districts after lazy candidates failed to raise cash to fight off bloodthirsty, cash-infused Democratic challengers. [Archive]

Whether or not they're successful in November, Democrats are quietly pondering a post-Pelosi House situation, and they're already sniping at each other like birds fighting over breadcrumbs.

The new "Poor People's Campaign" laid out its goals of trying to end racism, poverty and environmental destruction, but the Capitol Police told them to fuck off when they tried to deliver their demands to Congress.

The US Virgin Islands are in desperate need of rescue and repair in the wake of last year's hurricanes; now pencil pushers are warning about a complete collapse of the Caribbean paradise if something isn't done soon.

Democrat Mike Revis won a special state election in Missouri's District 97, a swing district that went for Trump in 2016. It really is the little things that count, so keep fighting!

After the Justice Department decided to stop police oversight, California Attorney general Xavier Becerra has said that the state will just do it themselves.

Kim Jong Un has sent his sister to South Korea for the 2018 Winter Olympics; now Mike Pence won't be the only second-tier dignitary everyone has to greet with a feigned smile.

Rather than bitching at Twitter and Facebook, the Chinese are simply charging and arresting people for trolling social media and making what the authorities call "fake news."

After allowing financial data on 143 million Americans to be stolen, Equifax has apparently been given a mulligan by Mick Mulvaney. A second mulligan, that is. A mulligan squared!

FCC Chairman and piece of shit Ajit Pai is touting a new report that claims killing net neutrality has already produced so many wins since broadband providers began expanding coverage in December of 2016, after dragging their collective asses under the Obama administration.

Computer nerds are warning about a bunch of new Russian-created hashtags to scare people into buying the myth of the DEEP STATE.

Now that SCOTUS has agreed to hear a case about data privacy, Microsoft, Google and Apple are backing a bill that would allow law enforcement agencies to request data stored in Not America rather than dealing with all the normal cross-border legal mumbo jumbo.

The LA Times is reportedly close to being sold to Patrick Soon-Shiong, a biotech and pharmaceutical billionaire, potentially returning the paper to local, possibly grifty ownership for the first time in almost 20 years. (Well, the possibly grifty part isn't new.)

The ghosts of First Ladies past scared Melon Trump, according to a right-wing crank who claims Melon ordered the White House "completely exorcised" of ghosts. Obviously Melon would rather be haunted by Jackie-O and Edith Roosevelt, not the ghoulish and depressing Margaret Taylor and Jane Pierce.

One of the Jesus freaks on Trump's evangelical executive advisory board is denying the existence of flu season in God's country, stating, "We have a duck season, a deer season...Jesus himself is our flu shot. He redeemed us from the curse of the flu."

And here's your morning Nice Time! The quiet beauty of the Scottish Isles! (SSSHH!)

We're 100% reader supported and ad-free because nice people give us their money! BE A NICE PERSON!