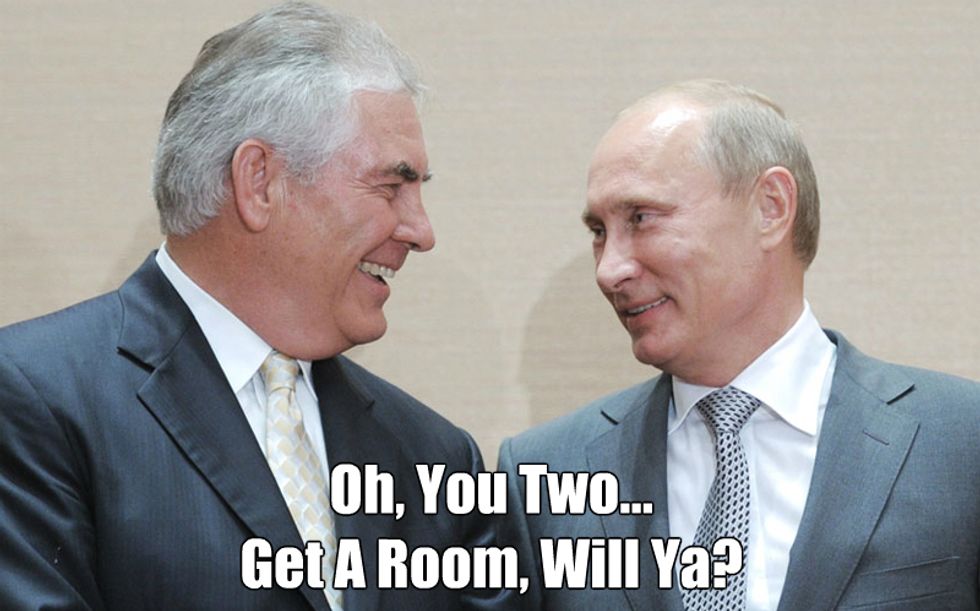 OK, maybe not one at the State Department...

President-elect Donald Fredovich Trump has selected the CEO of Exxon Mobil, Rex Tillerson, as his nominee for secretary of State, which, as we've noted before, should make for some interesting times, given Tillerson's and his company's close relationships with Russia. With recent revelations of Russian interference in the U.S. election, Tillerson may actually face a challenge in his confirmation hearings, even from pro-business Republicans. Is Tillerson too close to Russia? The Trump administration emphatically says Nyet.

Tillerson is one of Vladimir Putin's best American buds, having signed a $500 million oil deal with the Russian state oil company, Rosneft, an achievement which in 2013 earned Tillerson Russia's top award for foreigners, the "Order of Friendship," despite sounding like something made up for My Little Pony. Sadly, that great big oil deal, which could have led to the beautiful sight of Russian and American crews joining in a spirit of mutual solidarity and camaraderie to despoil vast oil fields in the Russian Arctic, fell through when the Russians invaded and annexed Crimea, resulting in international sanctions led by the U.S. and Europe. Gosh, wonder if putting Tillerson at the head of the State Department might change that? Whatever you do, don't say anything about conflicts of interest, because we're sure Mr. Tillerson will do something to avoid them, like handing over management of his financial affairs to the Trump kids.

Like the president-elect and many of his cabinet appointees, Tillerson has no experience in governing or diplomacy (or even working outside Exxon, where he's been since the 1970s), so it only makes sense he's been picked to head the State Department. But he sure knows how to make oil deals, which is what foreign policy under the Trump administration will be about anyway. The Washington Post reports Trump's transition team "is planning an aggressive public relations campaign to win confirmation for Tillerson" and to dispel the idea that he's too close to Russia. For starters, they're going to try to get him to stop wearing those big bushy hats all the time, and then any time anyone mentions Russia, John Bolton will show up on TV to shout "False flag!" If need be, Team Trump is even willing to start complaining about Hillary Clinton's email server again.

Even so, several prominent Republican senators have expressed doubts about Tillerson. Marco Rubio expressed "serious concern" about the nominee, adding that the State Department needs a leader who is "free of potential conflicts of interest." Rubio of course followed that with the usual blather about giving the oil-soaked CEO a fair hearing and "learning more about his record and his views.” John McCain, apparently caught on one of his cranky days, said Saturday Tillerson's ties to Russia were "a matter of concern to me," and promised close scrutiny of the nominee.

"Vladimir Putin is a thug, bully and a murderer, and anybody else who describes him as anything else is lying," Mr. McCain said on Fox News.

That doesn't seem in tune with the Magic of Friendship at all. We can hardly wait to see what form McCain's eventual backpedaling will take. Tillerson does have his supporters, too, like former Secretary of State Condoleezza Rice and reputed Dark Lord of the Sith Dick Cheney, who may actively advocate for Tillerson's confirmation, possibly by fixing senators with an icy glare and intoning "It will be so."

Among Tillerson's more surprising foes is Wingnut Christian leader Tony Perkins of the Family Research Council, who pitched a fit because Exxon has matched employee donations to Planned Parenthood and has supported the Boy Scouts of America's decision to allow gay scout leaders, which Perkins decried on the FRC's website:

Trump calls Rex a "world class player and deal-maker," but if these are the kinds of deals Tillerson makes -- sending dollars to an abortion business that's just been referred for criminal prosecution and risking the well-being of young boys under his charge in an attempt to placate radical homosexual activists -- then who knows what sort of 'diplomacy' he would champion at DOS?

Trump's choice of Tillerson meant yet another crashing end to Mittmentum, as Mitt Romney took to Facebook to thank Mr. Trump very very much for considering him for the SecState job, saying it was an honor to even be in the running. Romney wrote, "My discussions with President-elect Trump have been both enjoyable and enlightening. I have very high hopes that the new administration will lead the nation to greater strength, prosperity and peace." Now that his attempt to woo Trump has ended, Romney, one of Trump's biggest critics during the Republican primaries, will reportedly retrieve his testicles from the vault where they had been stored.