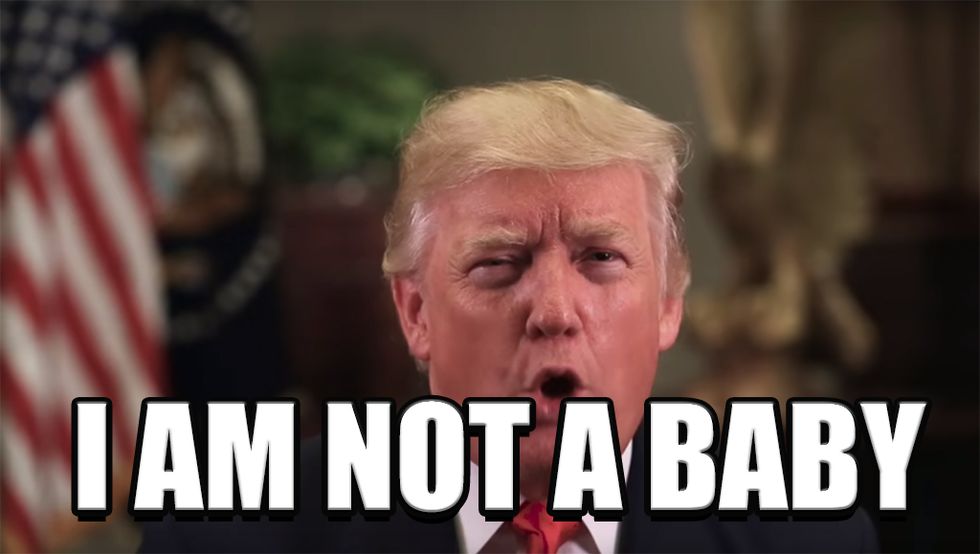 Good morning Wonketariat! We hope you're well-rested because there are many newses today! Here's some of the things we may be talking about!

Republican Sen. Bob Corker says he isn't going to wipe Trump's ass in a new interview with the Times that expands on his "adult day care center" tweet by stating, "I know for a fact that every single day at the White House, it's a situation of trying to contain him."

People are so mad that Mike Pence pulled a lame PR stunt at a sportsball game after they started calculating the bill he and Mother are sending to taxpayers.

FEMA Director Brock Long was on teevee talking shit about Puerto Rico this weekend, stating, "We filtered out the mayor [of San Juan Carmen Yulín Cruz] a long time ago," because she keeps begging for things like food, water, and electricity.

Rather than actually getting their hands and voting records dirty, Paul Ryan is telling Republicans to kick bump stock regulation over to the ATF.

Paul Ryan is trying to rebrand the Trump Tax Cuts with his own face, promising that all the evil corporations will let their profits trickle down on the poors if we sacrifice ourselves so that they can make more money.

Inside the smoke-filled rooms on Capitol Hill, Republicans are admitting they can't kill Obamacare, but dammit, they're going to try! It's not like they have better things to do...

Yesterday, Trump sent a letter over to the Hill saying that DACA kids can have their dreams, but Trump wants his wall and E-Verify to make sure ILLEGALS aren't working illegally.

Betsy DeVos isn't limiting herself to for-profit universities and killing public schools; she also has been pushing shady virtual charter schools that have terrible graduation records.

Trump's minions might be racking up historically expensive travel bills on all those fancy jets, but John Kelly is apparently penny pinching and making the non-NSC Trumpkins fly commercial.

The documents in Kris Kobach's voter commission folder have finally been unsealed, and it's about as bad as you'd think (once you get past all the big, black redaction lines). He wants to change federal voting laws to exclude more poors and minorities by forcing a proof-of-citizenship law.

Despite all the memos from Newt Gingrich, Trump's assault on federal workers has caused them to unionize in greater numbers than ever before.

Plans have been given a green light for the the Dwight D. Eisenhower Memorial on the National Mall. Too bad it seems pay more homage to D-Day than to Ike's warning about the military industrial complex.

Those awful for-profit schools that Betsy DeVos loves to jerk off have been paying students to leave good reviews on social media and like them on Facebook in order to artificially inflate their status and success.

Democrats are winning tiny state house races all over the country, and that's good news for prospective 2018 Democratic contenders.

Arizona Republican Rep. Paul Gosar thinks the Richard Spencer rally in Charlottesville was funded by George Soros.NOTE: 'Yr Wonkette STILL hasn't received a single Amero from Soros, so help us out and give us money!

Blackwater founder, goon for hire, and Betsy DeVos's brother, Erik Prince, is thinking about running for Congress in Wyoming with a fat wad of Mercer money and Bannon blow jobs.

A high school student in Houston is suing her school for expelling her not for standing during the Pledge of Allegiance. In her defense, she says that she doesn't think, "the flag is what it says it's for, for liberty and justice and all that."

A damning new report by the Guardian details a secret CIA torture camp in Afghanistan that is described as "nasty, but safe."

Trump's trash palaces in Scotland are hemorrhaging money because nobody is showing up; however, the Trump Organization literally blames their financial shortcomings on the price of oil.

Russians celebrated Putin's birthday by marching in massive protests in 25 cities that saw 132 people arrested. For his part, Putin decided to gift himself a nice American media blackout in Russia.

According to anonymous sources, Google has uncovered Russian fuckery with its ad network, and the problems with Facebook are even greater than we realize. WHOA if true!

Trump's resident pubic beard aficionado and digital director, Brad Parscale, says that not only did Facebook allow Trump to win, but he handpicked Trumpkin neckbeards to "embed" with the campaign. Facebook is calling bullshit. Like it has on every revelation so far.

More evidence is surfacing about the people Russia paid to spread bullshit racist propaganda on Youtube in order to support Trump.

Russia fuckery targeted veterans and US soldiers on Twitter and Facebook according to a new Oxford University study that found a slew of conspiracy theories and stupid crap.

Trump gave an interview to Mike Huckabee and it's your typical hot mess of face palming. He claimed to invent the work "fake," talked about how much "fun" he had throwing "beautiful, soft towels...Very good towels," at the people of Puerto Rico, and then threatened thermonuclear war in North Korea and Iran. We'd give you the full interview but it's been pulled down from Huckabee's Youtube page.

Sen. Tom Cotton has his nose buried so far up Trump's ass he's now telling other Republicans to quit if they can't get on board the Trump train.

(Not so) long ago, in his younger and more formidable years, Stephen Miller spewed some words that had been churning over in his head for quite some time, "Am I the only one who is sick and tired of being told to pick up my trash when we have plenty of janitors who are paid to do it for us?"

A super-rich Hollywood jerk, Harvey Weinstein, has been "You're Fired" for being too pervy for all the other super-rich perverts who perpetuate and/or ignore a culture of puss-grab games in Hollywood, and the media at large.

And here's your late night wrap-up! Stephen Colbert knows what Robert Mueller wants; Jimmy Kimmel called out Trump's accusations of fake news with charts and graphs; Seth Meyers took A Closer Look at REXXON and Puerto Rico; Bill Maher is butthurt about bad regulation; Chelsea Handler has good thoughts on gun control and a fucking long list of gun fetishists in Congress; John Oliver brilliantly 'splainered the Confederacy and offered some replacement statues; SNL wrapped up the week with the Notorious RBG.

We are supported by readers like you because we never get any checks from George Soros.
Dominic Gwinn