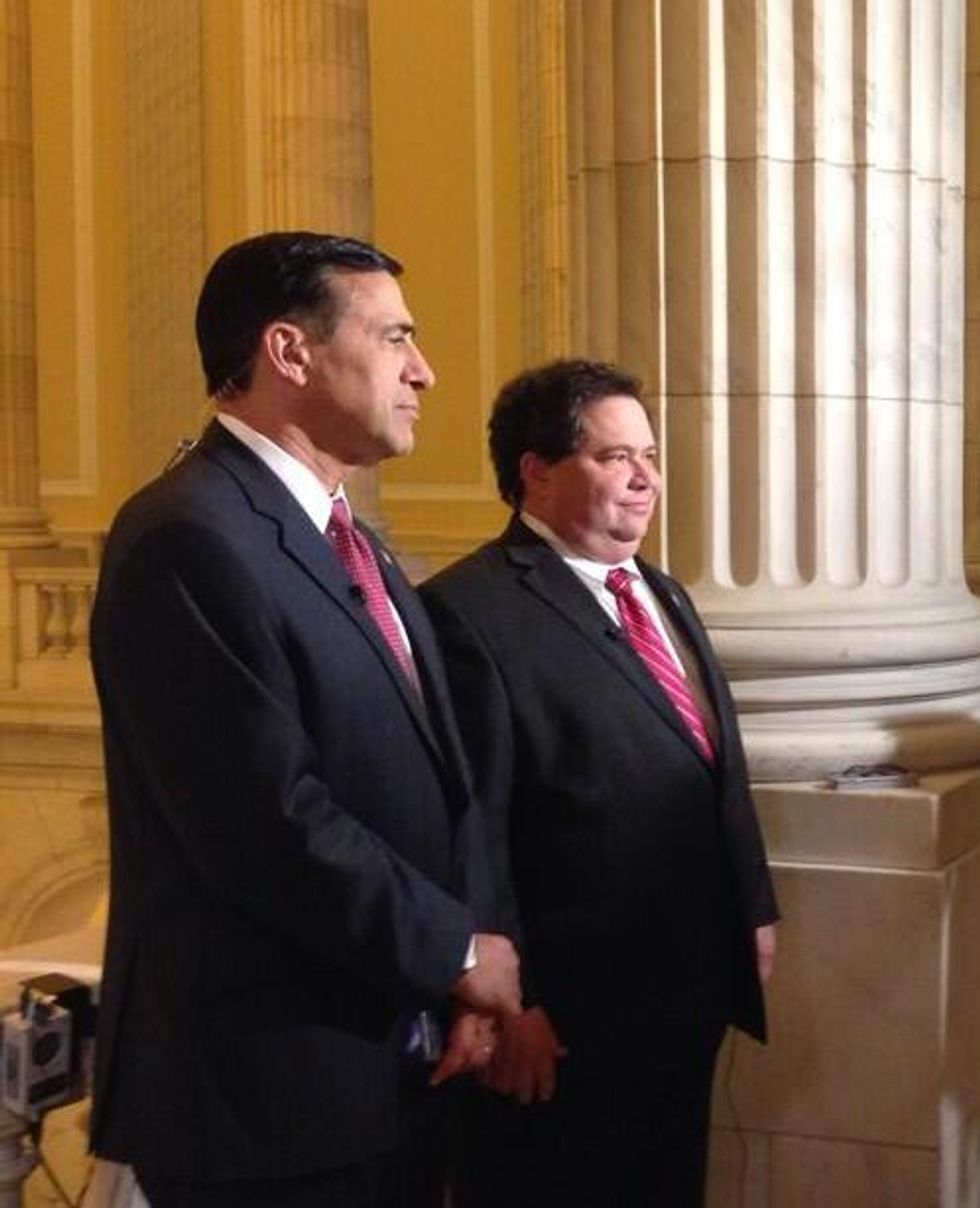 Well what do you know. Looks like our Kenyan Savior and Guiding Star Of Socialism Barack Mao Tsebama has been up to no good. Or at least, his minions have been snookering and hoodwinking us by manipulating the data. According to the New York Post, the Census Bureau was cooking the books on the monthly jobs data in the months leading up to the election, allegedly making the unemployment numbers seem better than they actually were!

But fear not! Congress shall investimigate this latest SCANDAL, and that means only one thing: Rep. Darrell Issa is on the case. And this time, he decided to bring that goalie from the Mighty Ducks film, Rep. Blake Farenthold (R-TX), to help share the blame when all this turns out to be a big pile of nothingness. Which, of course it inevitably will be, because Issa is a terrible person who is also very incompetent at his job.

Turns out, the Census may have been smudging the numbers a bit:

The Census employee caught faking the results is Julius Buckmon, according to confidential Census documents obtained by The Post. Buckmon told me in an interview this past weekend that he was told to make up information by higher-ups at Census.

Could this possibly be the smoking gun scandal that Issa and fellow GOP ass-clowns have thus far failed so miserably to find?

“The allegation that data gathered by the Census Bureau is being manipulated for any reason is extremely serious. The Oversight Committee has jurisdiction over the Census Bureau and will be thoroughly investigating these claims,” [Farenthold] said in a statement.

Yes! Investigate, Congress! Do your job thoroughly and in no way should you jump to any conclusions before you have all the facts, especially if you leak anything to the media. Because if information comes to light that completely undercuts your entire argument, that would be so incredibly embarrassing. Especially for Issa, who is so regularly disgraced that his name shall soon be a verb meaning to jump to conclusions based on very little evidence only then to learn that you are a fucking moron. Yeah, the intern Issa’d that report, sending it to the boss before running it past me.

Issa and others wrote to the Census Bureau, and luckily the Ghost Andrew Breitbart's Internet Depository for Braindead Ferrets got a hold of it:

Issa, Farenthold and Brady wrote that the allegations are “shocking” and “if true” they believe there may be a “systematic problem at the Philadelphia Regional Census office, where the alleged data fabrication occurred.”

If this whole story seems too bad to be true... perhaps it is because it is an example of terrible journamalism. The good folks at Columbia Journalism Review decided to look further into the NY Post story. You'll never guess what they found! (Okay, you probably will because it's likely the opposite of whatever Issa says):

It turns out that the single Census employee Crudele found faking reports—Julius Buckmon—hasn’t worked for the Census since 2011, when, presumably, he was fired. That news came from CNBC’s Steve Leisman, and it moots the thesis of Crudele’s entire column.

Damning as that is, could there possibly be more wrong with this article and the drastic-yet-not-unexpected overreaction by Issa & Co? Of course there is:

To make matters worse for the Post, Buckmon was just one of 7,000 Census workers submitting reports, meaning he couldn’t have meaningfully affected the unemployment rate one way or another had he actually been working for the Census in 2012.

Yet another 'scandal' undone because of pesky facts and accurate reporting. Sometimes, it feels like Issa isn't even trying any more.

Hopefully, our hero and perpetual Legislative Badass Rep. Elijah Cummings (D-Bad Mothafucker) will be able to use this opportunity to snuff out whatever little credibility Issa has left.