WaPo: This Terrorist Investigation Is Just Like '24'! BUT DIFFERENT, TOO? 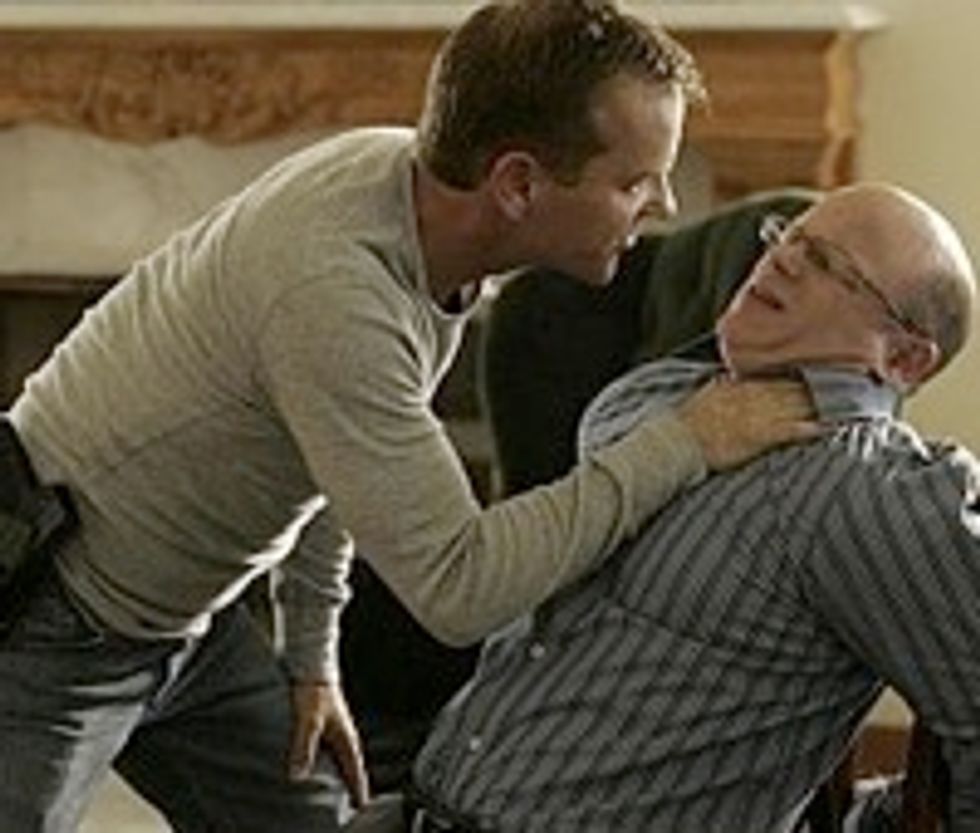 In an era when television is often ahead of reality, perhaps it was inevitable that the New York police commissioner measured the country's success Tuesday in the attempted Times Square bombing against the fictional heroics of Jack Bauer on FOX's "24."

At a midday news conference, Ray Kelly praised the actions of law enforcement officials for capturing a suspect in the car bomb case a little more than two days after the incident.

Kelly meant 24 hours, of course, a reference to the TV series in which Bauer always manages to solve a major terrorist event in a single day. But Kelly's comparison was clearly meant to draw the comparison between real-life agents and the Hollywood version.

Was there anything else wrong with this, though? Oh right, everything else. Ray Kelly meant no such thing. Ray Kelly was telling a little fun celebratory joke, the type of thing you'd say to your staff during a cake-and-soda-pop office party after a successful endeavor. He was not meaning to draw any comparisons. If anything, he was implicitly mocking stupid people who see any reason to compare a Hollywood television show with actual police and counterterrorism work. Nothing can be gleaned by comparing such things, because there are no two parties to compare, because one does not exist. There is no such thing as a "Hollywood version" of anything. There is, however, this Washington Post article, a "journalism version" of wasted production capacity.

In fact, the similarities are eerie between reality and the television version of the terrorist plot now playing out in New York City. The main difference? The video surveillance is far better in the show.

As Bauer tracks a terrorist bomb hidden in a van through the streets of Manhattan in this season's "24," he is aided by secret spy drones flying over the city, training their cameras on virtually every intersection. With just a phone call, Bauer directs a drone to the location he wants and up pop detailed images -- license plates, even the face of a suspect.

Oh don't bend over backwards. They're pretty much the exact same thing, "reality" and "the television version of the terrorist plot playing out in New York City."

What a contrast to the short, grainy video the New York Police Department released Monday of a "person of interest" in the botched Times Square bombing. Worse than most YouTube clips, the picture of a man removing his jacket is fuzzy, obscuring his face and any other identifying features.

LAME-ASS NYPD! Fuck them. Next time we want Jack Bauer to protect us, since we have a choice. We wanna watch his drone YouTubes. We wanna watch his drone YouTubes in 1080p 3D resolution. And we want drones in the first place, too! Does the United States produce any flying drones of any kind? It must be pretty awesome to live with those birds flying over your head, protecting everyone. DO IT OR WE WON'T VOTE.

Anyway, why not strain to connect this all to an entirely different major news story? Ray Kelly intended for this when he laid out his very serious treatise on reality vs. fiction, demanding robust debate from major newspapers in response, so blame him.

The difference between reality and Hollywood is also playing out in the gulf, where the hope that the U.S. military could save the day with some super-secret technology is turning out to be unfounded. As federal officials struggle to respond to the oil gushing from more than 5,000 feet underwater, it's been clear that the Defense Department does not have a silver bullet to fix what the oil company can't. As Thad Allen, the commandant of the Coast Guard, said at a briefing for reporters: "The mere presence of, say, a Navy ship doesn't necessarily add to the response, and a lot of the submersibles that are being used there that in some cases are very technically superior, have the ability to pick up small screwdrivers at a depth of 5,000 feet."

Movie buffs might be surprised to learn that the submarines owned by a private oil company are superior to the ones at the disposal of the U.S. military.

The reality, unfortunately, is that television always makes everything seem easier than it actually is. There are no drones overhead in New York City. There is no government oil-rig-disaster-fixer that can plug up the leak in the ocean.

What does exist -- especially in the case of the failed New York bombing -- are eerie similarities between the crisis playing itself out in real life and the television fantasy inspired by writers.

In the television series, terrorists use an improvised "dirty bomb" with radiological rods to inspire terror in pursuit of their political agenda against factions in their country. In the real world, officials said Monday that it is increasingly likely that the New York bombing attempt is linked to foreign terrorists.

A strong comparison: each "plot" has international players. But that is an interesting note on which to end (and yes, we just blockquoted through the whole article; there was no choice.) It would seem that certain "terrorists" act so as to install "fear" in order to force some sort of "change" often of a "political" nature. The vast majority still act because they hate our Freedoms, of course, but it's something to consider.

(And to the writer of the article, we understand that this could've been one of those situations where the terrible editor walks over to your desk and says, "Hey, I've got this great color piece you should do! So I've been watching 24 this year..." If that's the case, then we sympathize. If not, then go eat poop.)