Was George W. Bush Drunk At The Memorial For The Slain Dallas Police Officers? 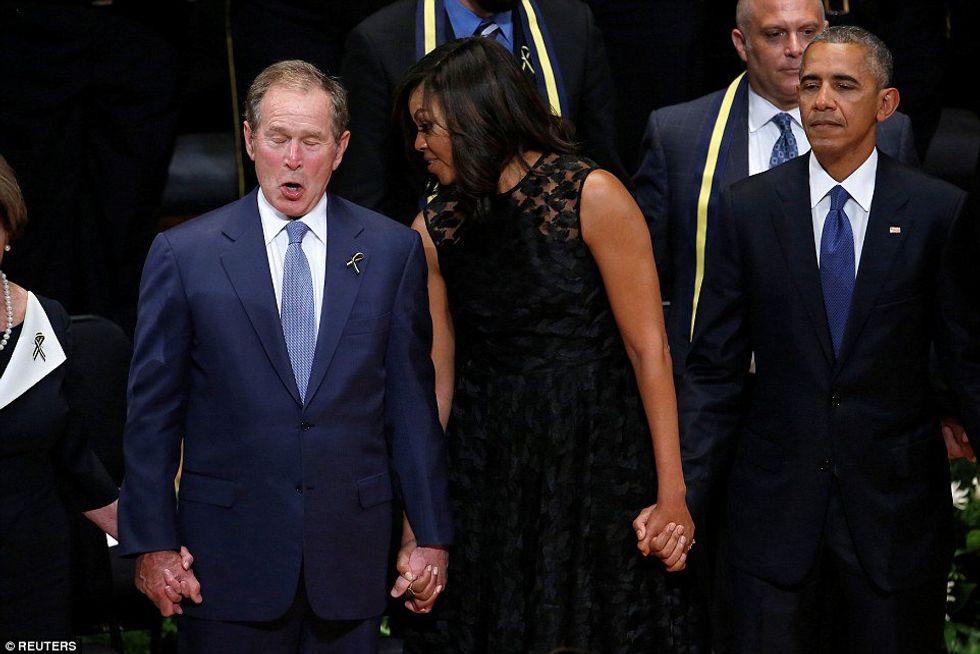 Picture by Reuters and we are totally commenting on it so FAIR USE MAYBE!

First up, this video of George W. Bush getting his groove on really inappropriately at the Dallas police officers' memorial made me sad for him. And if he is in fact drinking again, I am sad for him and for his long-suffering wife, Laura. Addiction is terrible! Especially when you are embarrassing yourself on national teevee!

Second up, that Reuters picture above, which we are totally commenting upon and so it is Fair Use maybe! Now, in that picture it looks like Michelle Obama -- LIVING SAINT -- is quietly focusing him on his inappropriate behavior, as a good person does to stop someone embarrassing himself on national teevee. But in fact, PICTURES LIE! Because in the video, Michelle Obama just smiles awkwardly at him, while he wears the face of a VERY HAMMERED MAN.

Here he is speaking. He does not actually fall down, but he's even more inarticulate than he used to be, with "mare" for "mayor" and "presnit" for "presnit." (He always said "presnit," we are pretty sure.)

So, on a scale of one to Dana Rohrabacher to Sarah Palin after her kid got arrested (no, the other time), how hammered is George W. Bush? We're gonna go with "Bill Clinton yelling at black people."