Was It Over When Trump Bombed Pearl Harbor? Wonkagenda For Thurs., Dec. 7, 2017 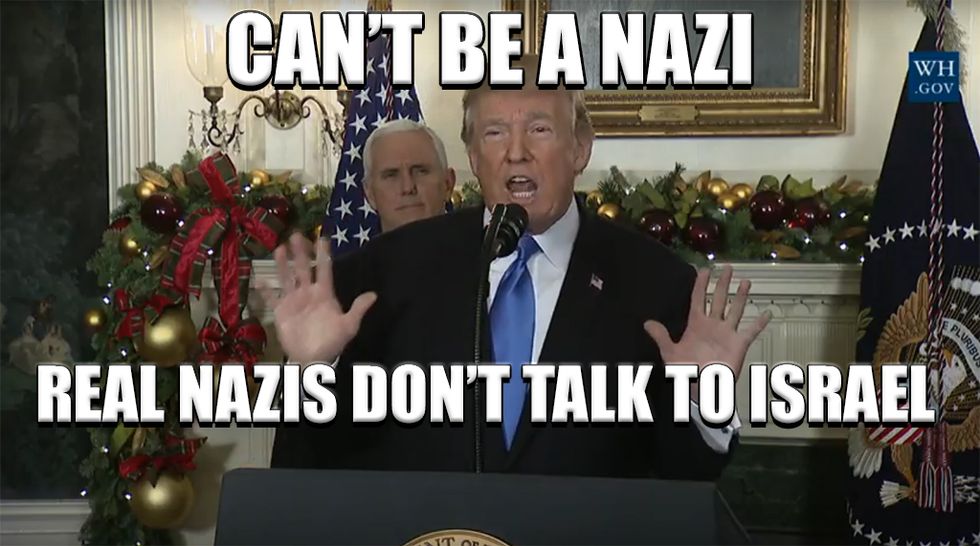 Morning Wonketariat! Here's some of the things we may be talking about today, but first, here's a baby elephant taking a dust bath!

The wildfires in LA are expected to get even worse today as hurricane force winds rip through Southern California. Seriously, the current tracking systems are being pushed passed their color-coded limits. Live updates here

While having an eight-hour chat about Trump-Russia stuff with the House Intelligence Committee, DJTJ cited attorney-client privilege when asked questions about his dad and the Russian lawyer lady -- but it's cool because even though neither he nor his dad are lawyers, there was a lawyer in the room THE WHOLE TIME.

Paul Manafort's Russian oil bro Oleg Deripaska dropped his libel suit against the AP after a judge laughed him out of court.

A couple of Republicans on the House Judiciary Committee want to drag FBI Director Christopher Wray into the Trump-Russia investigation citing "unprecedented bias against President Trump" in comparison to how they treated Hillary Clinton's malevolent maze of murderous mail.

K street lobbyists and corporate raiders are pressuring Congress to keep the alternative minimum tax that it was quietly slipped in the Senate's version of the Trump/Ryan tax cuts (for the super rich) so that they can keep benefiting from additional loopholes. Here's a brief 'splainer on the AMT.

The door was tepidly opened on long stalled plans to remake housing lenders Fannie and Freddie after legislators agreed go on a few dates and see what happens.

Despite being warned, Jared Kushner was the loudest voice in Trump's ear to move the Israeli embassy, and Prince Jared is sure that the Arabs and Palestinians will sit down for Middle East peace talks after they finish rioting.

But it wasn't just Jared. Evangelical groups, like the Faith and Freedom Coalition, and Republican super-donors like Sheldon Adelson pressured Trump to move the Israeli embassy and bring Jesus back from the dead (again).

After another woman came forward with sexual harassment allegations, a wave of Senators are calling for Sen. Al Franken to resign. He'll make an announcement today.

The House passed the "Concealed Carry Reciprocity Act" for all the closet gun fetishists; aside from potentially ignoring state laws, it lets Jeff Sessions decide about "bump stocks" and wags a finger at the Criminal Background Check System.

Some big name businesses are now pressuring legislators to protect the DREAM Act, and even IBM is marching DACA youths through the halls of Congress.

Senate Democrats sent REXXON a nastygram demanding that he clue the rest of us in to all the ways he's screwing up the State Department -- OR ELSE.

Back on election night, some dingus from ABC News called up the Trump campaign to tell them they were probably going to lose, but none of this has convinced us to give Corey Lewandowski any money for his book.

Texas Rep. Al Green's attempt to impeach Donald Trump failed (again), but it did give us a hilariously awkward moment where the House Reading Clerk Susan Cole was forced to spell out "bitches" on the House floor.

UN Ambassador Nikki Haley was in the Situation Room and suggested that the US might skip the 2018 Winter Olympics because South Korea is not exactly safe, definitely not because Russia was banned by the IOC for getting all juiced up.

Hippies who co-own outdoor recreational equipment stores put down their bongs to scribble mean words about Trump's decision to downsize Bears Ears and Grand Staircase-Escalante monuments in Utah, saying that Trump severely abused the purpose, spirit and intent of the Antiquities Act.

As the AG of Oklahoma, Scott Pruitt blocked FOIA requests that would show just how bad a toxic waste site is because it would have been embarrassing for Sen. James Inhofe.

After being denied his homo-sex marriage license, David Ermold is running to replace Kim Davis, the bat-shit Christianist who hates homo-sex, as the Rowan County Clerk.

Hamas is urging Palestinians to take part in "days of rage" after Trump announced the relocation of the US embassy in Jerusalem.

In a rare display of logic and compassion, the Trump administration called for an immediate end to the Saudi blockade of Yemen for

Brexit talks cautiously lurched forward yesterday as British Prime Minister Theresa May prepares to discuss the Irish border post-Brexit; however Ireland's Democratic Unionist Party (DUP), a hard-right Trump-esque faction, is threatening to pull its support from May for bowing to EU demands as a hard deadline looms. It's a perfect storm of stupidity.

The National Enquirer is standing by it's COO Dylan Howard despite allegations that he too is an awful sex monster.

In a SHOCKING turn of events, a survey of 800 start-up CE-bros in Silicon Valley has found they think sexual harassment allegations are exaggerated, and have no plans to deal with awful sexual monsters.

Facebook will now use the Weekly Standard to fact check for "false news," that way your crazy aunt can safely rattle off talking points about Hillary's high-flying automated Benghazi murder machines from Mars without wearing her tinfoil hat.

There's growing concern about the repeal of net neutrality from a looming court case that could decide whether telecoms could be exempt from FTC regulations, effectively giving ISPs even more leeway to screw consumers.

"Operation Titty Twister" is a concentrated effort by right-wing extremist trolls to silence journalists on Twitter by mass reporting them under Twitter's blanket anti-harassment policy.

After slurring his words towards the end of his announcement to move the US embassy in Israel, people are now hilariously wondering about Trump's health. This is a man whose four basic (fast) food groups are fried chicken, pizza, diet cola and cheeseburgers.

NICE TIME! After a discussion about the results of the Atlanta mayoral race, a viewer sent a racist email to the local CBS affiliate calling one of the anchors a racist n-word, so the anchor read the email -- ON AIR -- and called the bigot out.

And here's your morning Nice Time! IT'S FIONA! Yeah, it's an old one, but it's still adorable!

We're independently owned and operated, so subscribe if you want more newses and thinkerings!