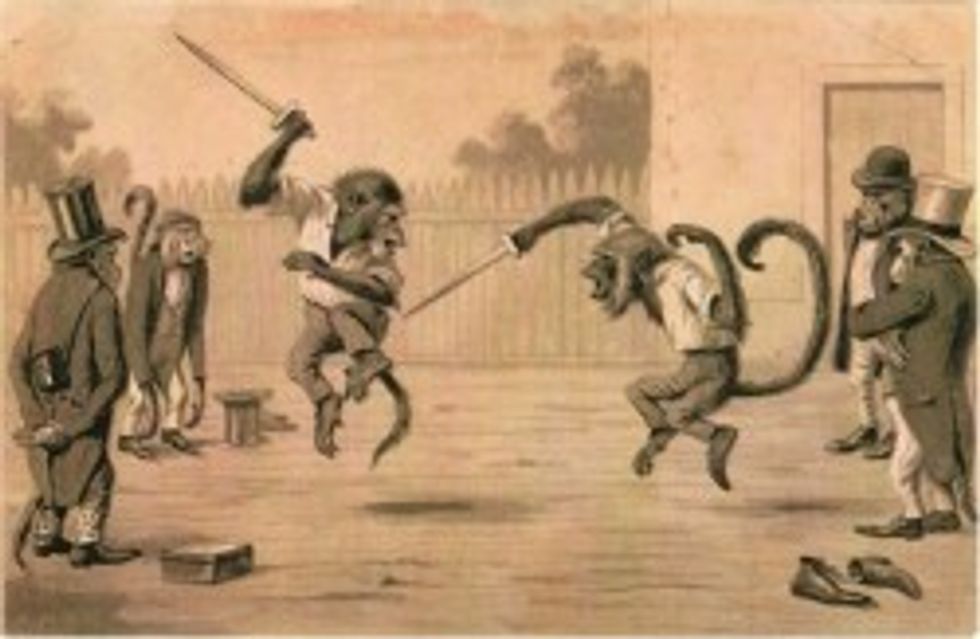 The turd-flinging rabid monkey cage match is BACK ON in Washington: GOP lawmakers are holding abitter, pointless fight with the White House over Barack Obama's Marxist plot to deliver his all-important "hobo jobs for no one" speech to Congress on the VERY SAME NIGHT AT THE VERY SAME HOUR that the GOP is planning to hold its 108th terrible brainless debate of the presidential election season. What will America's viewers choose?  Economic Doom Newzhour with Barack Obama OR the chance to watch Rick Perry curse out Social Security while Rick Santorum humps his leg in the vain hope that some Perry poll number magic might rub off?

The White House started this by requesting a joint session of Congress to make the jobs speech on the scheduled GOP debate day of September 7, to which John Boehner replied, "suck my orange skin" in this letter telling Obama to move the date of the speech to the following day. BUT September 8 is an American religious holiday known as the NFL season opener, so no, that won't do. Blah blah, political accusations flying like drunken fists in a meth-addled Arizona trailer trash strip joint brawl.

Here is the White House pretending like it wasn't on purpose:

Asked whether the speech was purposefully scheduled the same night as the Republican debate, White House press secretary Jay Carney said, “Of course not.”

“It is coincidental,” said Carney, who explained that a number of considerations were taken into account when Obama settled on Sept. 7.

“One debate of many that’s on one channel of many was not enough of a reason” to pick another date, Carney said.

And then Carney suggested the GOP debate would at least be able to draw viewers away from the Wildlife Channel. Haha, ZING. [The Hill/ Fox News]