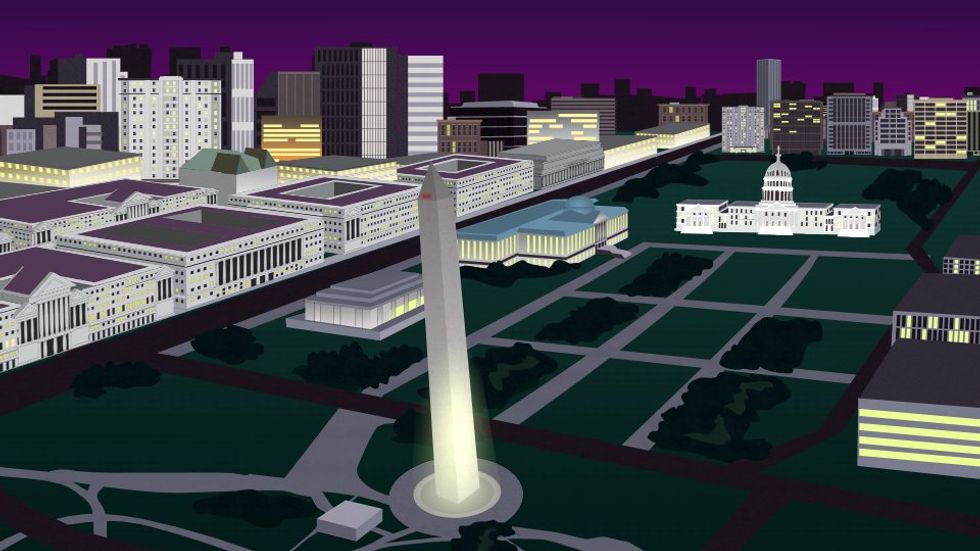 Exactly what it looks like, at least on "South Park."

Psssssst. You guys. The very last primary of the godawful longest U.S. American primary season is happening, and then all we have to do is have an election in November, and then we can move on to more important things, like the 2020 election. (For real, America, we are dumb and bad at this whole "perpetual election season thing." When are our elected officials supposed to "govern"? When are we supposed to wash our hair and take our TruckNutz to the cleaners? Never, that's when.)

But yes, OK, fine, the Washington DC Primary. It is for Democrats! And the winner is Martin O'Malley, good night!

Of course, Hillary will most likely win DC (due to demographics alone, and also #establishment and #beltway and #otherhashtags), and she has won the nomination, which may make this seem anticlimactic. According to The Atlantic, Bernie and Hillary are actually meeting today:

What will Sanders ask for? For now, he appears to be focused on changes to the nominating process, and winning influence over the party agenda. Citing anonymous sources close to the senator, The New York Times reports that “he will try to get assurances from Mrs. Clinton that she will fight for many of his campaign policy proposals, including a $15-an-hour federal minimum wage, a jobs program tied to repairing the country’s infrastructure, and tuition-free public colleges and universities.”

Those would be good things for them to work toward! At the end of their meeting, they will kiss and make up forever, and with all voices heard and all votes counted, all the US American Democrats, and ALL OTHERS who agree that Donald Trump is a pathetic weakling and a dirty gopher taint (which is ALL SENTIENT, PATRIOTIC AMERICANS) will come together to win in November.

Sound good? Good. Now you may consider this thread open, like your nana.

UPDATE: OH HI, your results are in, and Hillary Clinton wins the District Of Columbia Primary. The end.